As we drove our rental car out of downtown Hania with no problems, I thought, “That was easy.” Little did I know, more challenging driving situations were, literally, right around the corner.

As soon as we got onto the highway, I realized this isn’t America anymore.

I was driving along in my lane, following internationally accepted road rules, when cars kept passing me across double lines, into oncoming traffic. After nearly causing a dozen accidents, I noticed that most trucks and slower cars were actually driving on the shoulder, turning a two-lane highway into four lanes.

I realized that I was a slower car; I needed to be on the shoulder.

We turned off the highway and onto a winding, sinuous mountain road that we followed down the entire west coast of the island. The road was about as wide as a golf cart path, which conveniently, our car, and most cars on the road, were about the size of golf carts. There were almost no other cars on the road and this was a great thing. Around the blind, hairpin curves, all I could see was sky ahead of me, and it would have been easy to have a head-on collision, especially since I was usually way too far on the left, giving imminent death a wide berth.

We passed through tiny villages clinging to the mountains, with roads so tight only one car could pass through at a time. To complicate things, locals park their cars wherever they please, often blocking off part of an already narrow road.

Along the high road the wind raged. I feared the minuscule car might get lifted off and tossed in the Mediterranean down below. I dodged pot holes and swerved around jagged rocks that had recently liberated themselves from the cliffs. I zigzagged around sheep and once had a stand off with a very stubborn goat. It was one hell of a drive, but to be fair, I was only going about 25 the entire way so it wasn’t ever that dangerous. 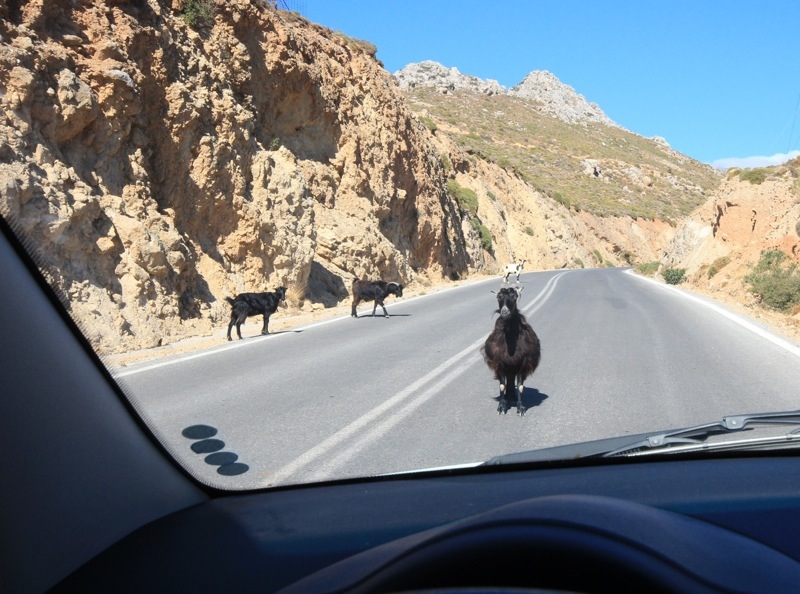 At one point, I’d had enough. I had to let Kristi drive. I was getting a little vertigo trying to drive on the knife-edge goat-paths in the wind. She took over and guided us down to the ethereal Elafonisi beach. If we’d have driven off the cliff on the way and died, I believe the beaches in Heaven would have been very similar. Crystal clear water, soft white sand, caressed by a gentle sea breeze, and backed by the dramatic mountains we’d just driven on, the beach was perfect.

Returning to town is where the real drama started. We needed to find a specific parking lot in the downtown area. Hania is a medium-size town and although a network of one-way streets, it can hardly be considered a challenging place to drive – provided you know where you are going. We did not know where we were going. We were looking for street names that have to be some of the longest, most unpronounceable names in the world on some of the tiniest signs.

KRISTI: What street was that?
JEFF: I think that was Patriarch Gigolo Street
KRISTI: (looking at map seeing PATRIARHOU GRIGORIOIU) Close enough. I know where we are.

The girl from the car rental agency made an X on the map for our destination and assured us it was easy. It was by a pharmacy and a blue sign, she said. Every sign in Hania is blue. This must be the most over-medicated society in Europe, as there seemed to be a pharmacy on every corner.

We overshot our street and ended up on MANOUSSOGIANNAKIDON. We drove in circles, Kristi navigating, me driving and cussing, both of us stressing out. As we crawled through the streets peering at the signs, other cars honked at me. Bicycles cut me off. Motorcycles passed me on the right as I tried to turn that direction. Pedestrians with death wishes walked out in front of me. 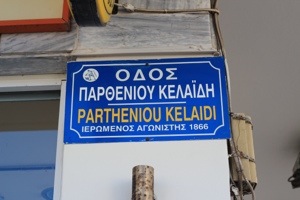 I turned down a one-way street and careening towards me was a motorcycle.

“No. He is,” Kristi replied calmly. “Evidently there is no hard and fast rule about one-way streets here.”

In a high-stakes game of chicken (in my mind at least), the motorbike veered off at the last second. A few minutes later, on the exact same street (which I was on by mistake after driving in a circle) the exact same thing happened with a different motorbike. Now a little wiser, I didn’t have an anxiety attack as I came within inches of hitting the bike head on.

After that, a man ahead of me shoved his car in reverse, nearly hitting me while trying to parallel park. I honked at him but this was an over-reaction. He had plenty of space. There was a solid 2 inches between the cars.

It was all terribly stressful. I don’t know how I’d manage with truly bad traffic in a real city. We will likely never find out.

Finally, at a point of mental breakdown we found a parking lot and the attendant, sensing our frustration, let us park and walk around until we found the correct lot, which happened to only be a few meters away. We were right on top of it. We’d surrounded it and now it was there for the taking.

After that stressful first day on the road, we became master drivers. We drove back into Hania without drama; we actually passed other motorists on the highway. (Okay, maybe only a time or two). We negotiated hairpin turns atop vertiginous cliffs going only 5 kph under the speed limit.

I may never drive like a Greek, but I learned to hold my own. Then again, I’d probably be arrested in the USA if I drove like a Greek, so it’s all for the best. If I drive here again, I’ll be on the shoulder, enjoying the scenery as the world speeds by.

To prove that I am not completely exaggerating, here is a slideshow of road trip photos. Click on any photo to open a slideshow view.

Sheep in the road on the mountain roads, another complication. 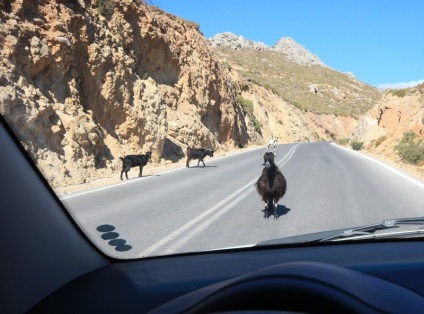 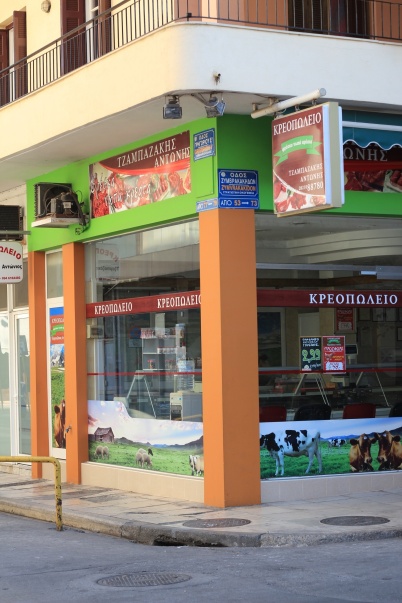 Can you read those street signs? Neither could we.

We were looking for the closer, large blue sign. We could not decipher the writing. We were confused by all the large blue P signs.

All along the highway there are roadside shrines. I think most of them mark the spot where someone drove off the cliff to thier demise.

Another of the countless pharmacies near the car park we were looking for. It is next to a pharmacy, said the girl. It will be easy to find.

One of about 500 pharmacies located near our parking lot.

Driving down the road and trying to find the right street sign is a bit of a challenge. 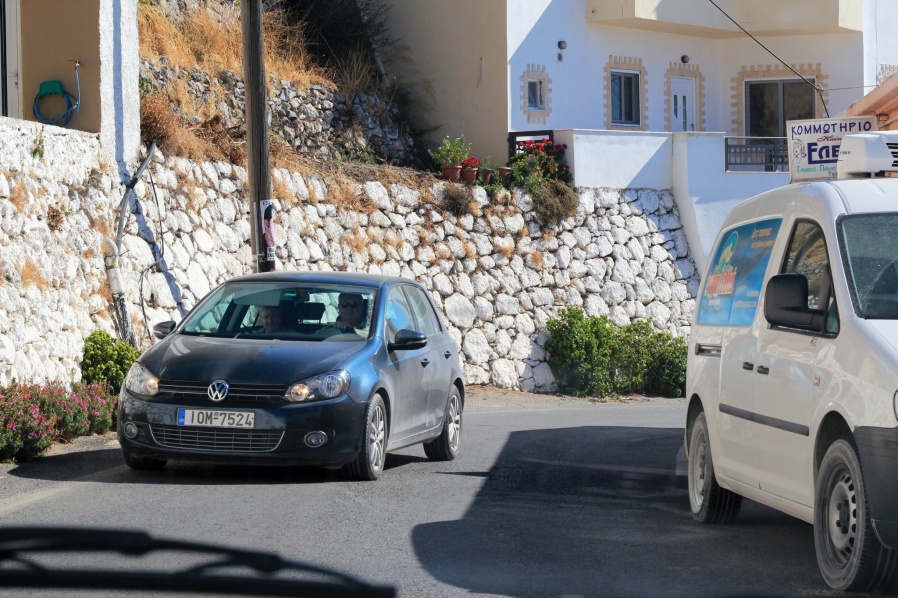 A typical scene in the mountain villages. This car had to back up to let us by. 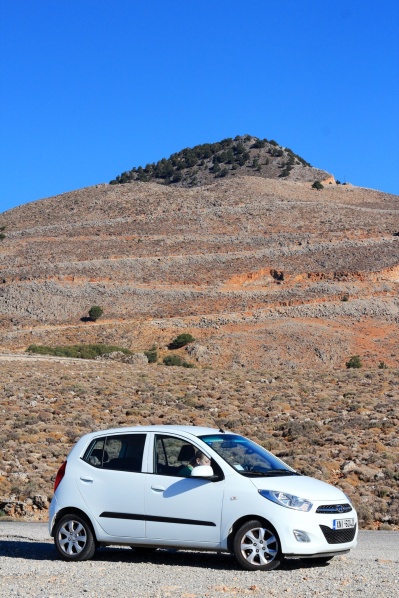 Our rental car at the bottom of the switchbacks. No American can ever complain about fuel prices again. It cost me $67 to fill this up!

Clear water, soft sand, sunny skies and only a smattering of tourists. Elafonisi beach in October is pure bliss.

This was actually one of the wider mountain roads we drove on.

What is the scariest road you’ve driven on?