With my limited vocabulary, I am having a very difficult time writing about my adventures in Alaska.

Words like awesome and spectacular and majestic seem trite and inadequate when trying to describe this incredible state. Adding an f-bomb or other expletives in front of those words helps give them emphasis, but this is a family friendly blog.

I recently went flight-seeing over Glacier Bay National Park, and my mind was blown yet again. In trying to create a post to sum up the experience, I am left speechless. How do you explain something that is all at once mind-blowing, spiritual, awe-inspiring and, at times, terrifying?

I have experienced some unbelievable things in Alaska, from the northern lights to autumn in Denali to close encounters with wildlife, but this ranks right up there with the most amazing. Since I can’t adequately sum in up in words, I’ll take you along on a photo tour. Of course, photos don’t do it justice either. A great philosopher once said, “Trying to experience Alaska through photos is like going to a party through a keyhole.” Let’s look through the keyhole together. After taking off from the Gustavus airport, we flew about 10 miles until we reached the Beardslee Islands, which are rich in wildlife and popular with kayakers. Looking straight down, the water was turquoise and translucent. Kelp forests were visible from the sky and the web of islands almost looked like something out of the tropics, and not Alaska.

From there, we flew across the lower half of Glacier Bay towards the massive Brady Icefield and the Fairweather Range. The Fairweather Mountains are the highest coastal mountains on Earth and the reason for the glaciers. Warm, humid air from the Pacific hits the mountains, rises, cools and dumps snow, creating the Icefield that spawns numerous glaciers which creep down the mountain valleys.

Peaks and glaciers at the edge of the Brady Icefield.

Reid Glacier spills down from the Brady Icefield. Can you spot the cruise ship?

After flying over the Reid and Lamplugh Glaciers, we skirted the edge of a mountain and had the most dramatic view of the day: John Hopkins Glacier. Tucked away in a fjord on the far northwest corner of the park, this glacier is the highlight of a boat tour. It is not only the most spectacular spot in Glacier Bay, but one of the most spectacular spots on Earth. As we flew towards the massive glacier surrounded by towering peaks, I felt a bit of panic. “Where is the pilot going to go?” I thought. We felt hemmed in by the mountains; I experienced a tinge of claustrophobia.

The landscape is so massive that it can be deceiving. The pilot dipped the wing and circled over the top of the glacier,  which is over a mile wide, and turned amid the towering peaks. In reality, we were a safe distance from the mountains even though it felt we could reach out and touch them. 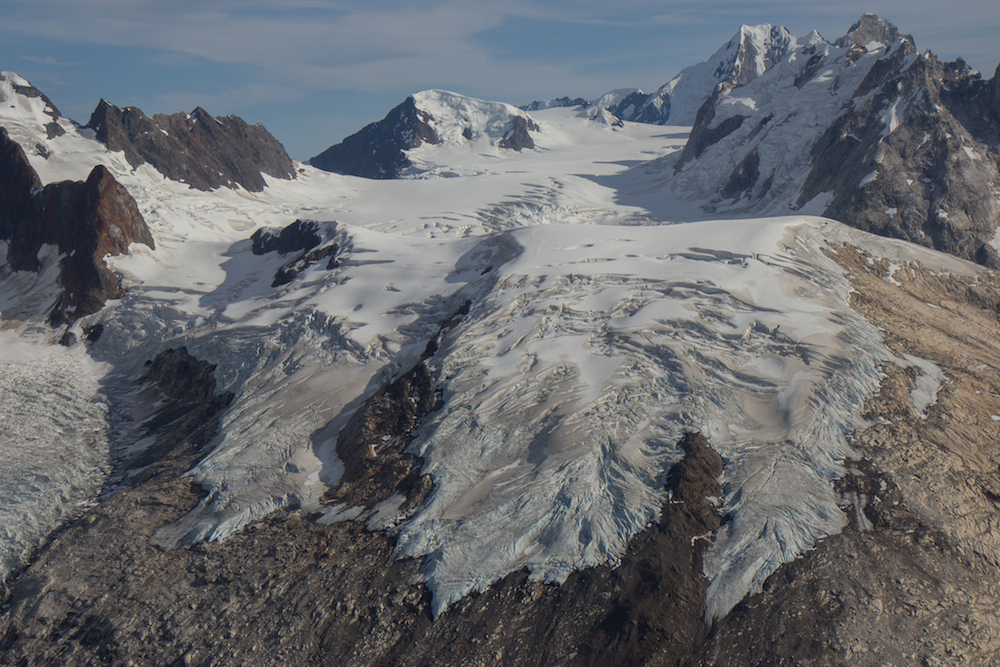 We flew back down the fjord towards Lamplugh Glacier, which afforded some of the best photo opportunities of the day. We could see the massive glacier tumbling down the mountain and see all the way down Glacier Bay, which was completely filled with ice only 250 years ago. The light was perfect. I was in awe. 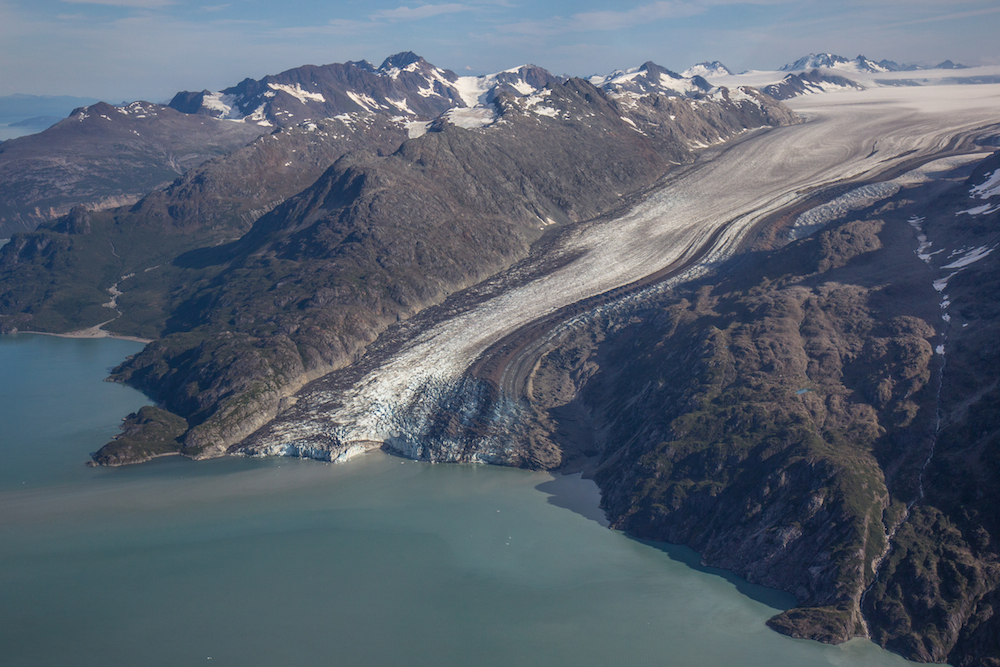 The plane rounded another bend and we had awesome views of the Grand Pacific Glacier which tumbles down from Canada, and the must prettier Marjerie Glacier. The pilot went right over the top of Marjerie and turned a tight circle between the mountains. 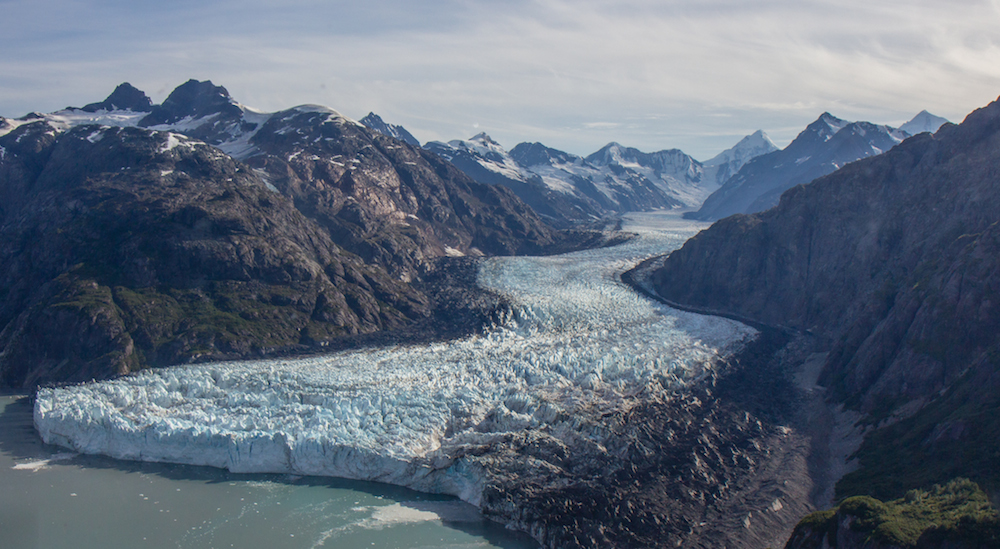 Next, we cut across the mountains and flew over the East Arm of Glacier Bay, which was very exciting. I have taken a boat tour up the West Arm of Glacier Bay three times, but the East Arm is closed to boat traffic. It is the forbidden fruit of the area. We flew over the massive Carroll Glacier, and over the toe of Cushing, Morse and Muir Glaciers. I was on the wrong side of the plane to get photos of those glaciers. Instead, I had an even better view of the colorful valleys to the south that were filled with glaciers not so long ago. 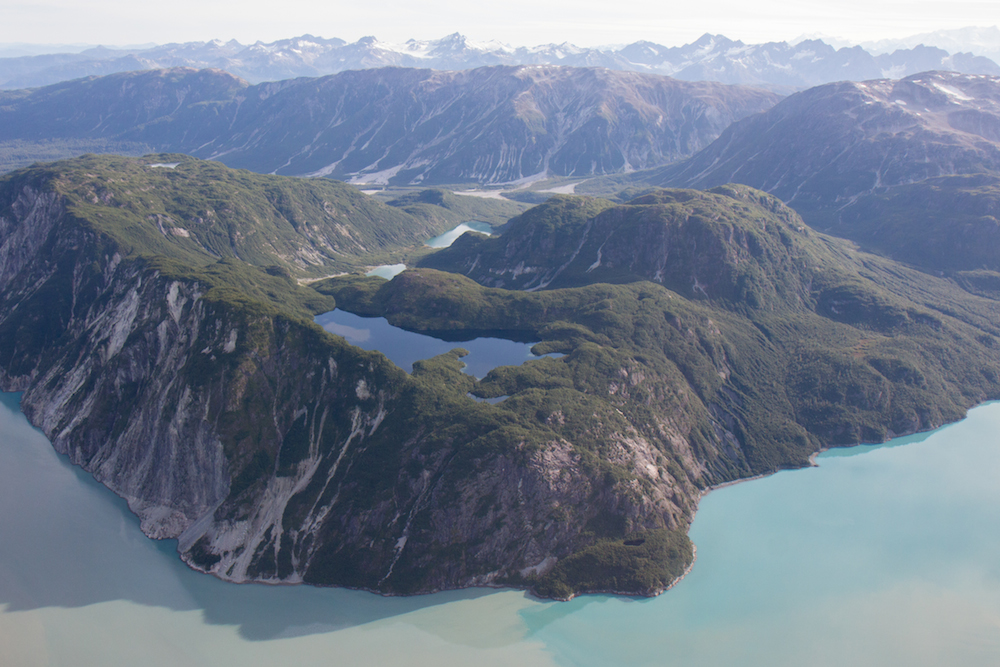 Alpine lakes above the sea.

As we flew over the Muir Inlet, around more towering peaks and down Bear Track Valley, we saw countless waterfalls, translucent alpine lakes and verdant meadows that have probably never been visited by humans. It was prime backpacking area, except that it is almost impossible to access. If those mountain lakes and waterfalls were in California or Colorado they’d attract throngs of tourists. Being in the Alaskan backcountry, they get no human visitors.  And if they did, those humans would be rendered speechless.

What words would you use to describe Alaska?

32 thoughts on “Flight-Seeing over Glacier Bay, or HOLY $%^& THAT WAS AWESOME!”