Before visiting Hong Kong, I got a message from fellow blogger James Louie – A native of HK and one of five followers of my blog. James saw that we planned to visit his hometown and offered to show us around.

On our first morning in Hong Kong, James met us at our hotel in Kowloon, and we ate breakfast at a tiny Asian diner. It was the type of place that is always packed with locals, has no English menu, looks absolutely delicious, and is totally intimidating to an outsider. We were glad to have James with us so we could eat at such a place.

We plopped down on little plastic chairs and ate an assortment of things, from wonton soup to strange Chinese rice porridge. Wonton soup is one of my favorite foods, and this one was excellent. In general, I am not a big fan of strange rice porridge, but I can attest that this one happened to be disgusting.

Little did we know, we’d need all those calories because we then embarked on the James Louie Hong Kong Speed-Walking Tour™.

James, to put it lightly, walks fast. He moved through the crowded streets with the grace and agility of Jackie Chan running from a team of Triad goons. He darted around slow-moving old ladies, slipped between businessmen, and swerved around packs of schoolgirls who were walking and texting at the same time, narrowly leaping back in front of them to avoid a head-onto collision with tourists coming in the opposite direction. One time, and I swear I am not making this up, James channeled Keanu Reeves in the Matrix and actually jumped up against a wall and leaped over a pack of pedestrians. On another occasion, he went all Jet Li and flew through the air, landing gracefully on the other side of a throng of people who’d coagulated in the street.

It was great. All we had to do was keep up with James, and we didn’t have to pay attention to where we were going. Otherwise, we’d have always looked like those confused tourists you see bickering with each other. “I think we need to go down Shangri-La Street and then over to Lo Mien Avenue before crossing over to Moo Goo Gai Pan Boulevard.”

“No, no, no, no. It would be way easier to take the subway to Teriyaki Avenue and then cut across Wonton Street.”

“I think your map is upside down.”

Luckily, after two months of volcano trekking in Indonesia, I was in reasonable shape, so I could more or less keep up unless I paused for half a second to snap a photo. In that case, I’d find myself three blocks behind and have to run over old ladies, push aside monks, and trample little children to catch up.

One of the highlights of our tour was the series of outdoor escalators on Hong Kong Island. They are a unique feature of the city as they allow people to effortlessly ascend the steep hills, but were also a welcome respite from the running to keep up with James.

After a morning of sightseeing, we went to a dim sum restaurant that was remarkable for being known as one of the 101 best restaurants in the world, and also remarkable for packing hundreds of people into space the size of a closet. We shoehorned ourselves into a corner table, and James ordered an assortment of dishes that we shared family style. Again, it was the type of place that we’d have had difficulty finding on our own. Plus, we probably wouldn’t have eaten there without James because of claustrophobia.

After lunch, we rode a series of trams and buses out to the edge of the town to an army museum. On the way, we passed by the streets that had been occupied by the Hong Kong students who were demanding fair elections. The massive street protests were major international news. Although James supported the efforts of the protestors and had been to the site himself, he said that most people in Hong Kong are pragmatic and didn’t see the point in the protests since they would probably not bring about change and were only hindering business and transportation.

James was clearly frustrated with the Chinese government. His family had fled to Hong Kong during the revolution to find freedom, and now that those freedoms are being eroded, James is looking to emigrate himself. Hong Kong is so expensive, it is almost impossible for the average person to pay for rent or buy an apartment.

At the edge of the island, we saw a different side of Hong Kong. Glittering towers of steel and glass suddenly gave way to traditional fishing villages and a bit of nature. It was a tiny glimpse into what the city was like not so long ago. 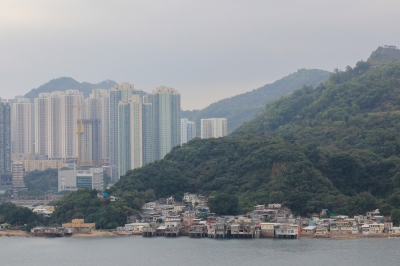 We parkoured our way back to the ferry terminal and over to Kowloon to have sunset drinks. We found a place on the promenade with great views of Hong Kong Island and drank a couple of beers while talking. Although there was a language barrier because James spoke English much better than we did, we chatted about Indonesia, travels, Alaska, life in Hong Kong, and future plans. Although from Asia, English is James’ first language. His parents thought it would be helpful for him to speak fluent English and thus only spoke it at home and sent him to an international school.

“What are you going to do tomorrow?” James asked us.

“We have no idea!” We said. “You showed us everything we wanted to see!”

James walked us to the subway terminal, and we parted ways. We were then forced to find our own way through the seedy streets of Kowloon back to our Red Light District Hotel (see footnote).

Since we’d already seen the entire city with James, we spent the next three days eating street food, going to the movies, trying not to get too lost, and rehabbing our sore feet and legs. In the evening, I practiced my street photography while dodging hookers and Triad members. We had a great time in Hong Kong, in large part because of James. ◊

Hong Kong escalators – the one time we got to slow down and not run!

Seen on the ferry to Hong Kong Island

I paused for one second to take this photo then found myself 3 city blocks behind James.

James and Jeff. Had I known we were going to be speed-walking, I’d have worn running shoes.

Footnote: After being in Indonesia, where $20 would buy a nice hotel room that included two servants and voting rights in the Indonesian parliament, we were struggling to find a hotel room in Hong Kong for less than a year’s wages. Finally, we found a hotel in Kowloon with rooms the size of a shoebox on Shanghai Street. We later realized that our room was cheap, in part, because we were in the heart of the Red Light District. Hookers roamed the streets at all hours of the day, pretty girls with too much makeup and not enough clothes offered sexy massage to men passing by, and sex cinemas and sex shops seemed to be on every seedy alleyway.

Would you like to go on a James Louie Speed Walking Tour?