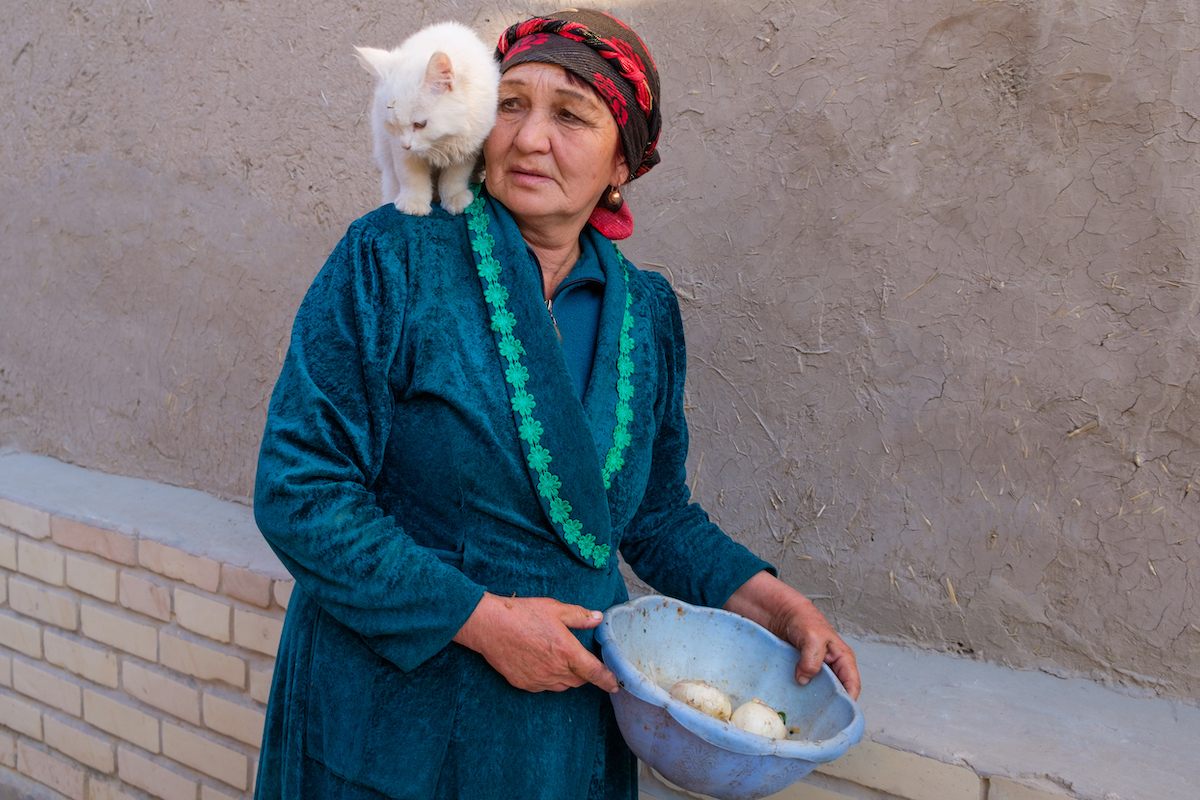 In the remote southwest corner of Uzbekistan lies the spectacular town of Khiva. Surrounded by an imposing wall, and packed full of tile-encrusted mosques, minarets, madrasas, mansions, and mausoleums, the city is one of the world’s best-kept secrets.

But it won’t stay a secret for long. I recently spent two weeks traveling through the Silk Road cities of Bukara, Samarqand, and Khiva, and a tourist boom is looming on the horizon. Near the town center in Khiva, a new rail station recently opened, linking this sleepy corner of the country to the capital city of Tashkent by bullet train. Crews are busily erecting large hotels and shopping centers near the train station. Change is in the air.

For now, Khiva is a delight to visit and photograph. A combination of soft, autumnal light, clear desert skies, photogenic people, uncluttered backgrounds, and stately, robust architecture, made it a photography paradise. I walked an average of 10 miles per day in my two weeks in Uzbekistan, not only visiting the major sites, but also roaming the back streets, meeting the locals. It was one of the most enjoyable travel photography experiences of my life. 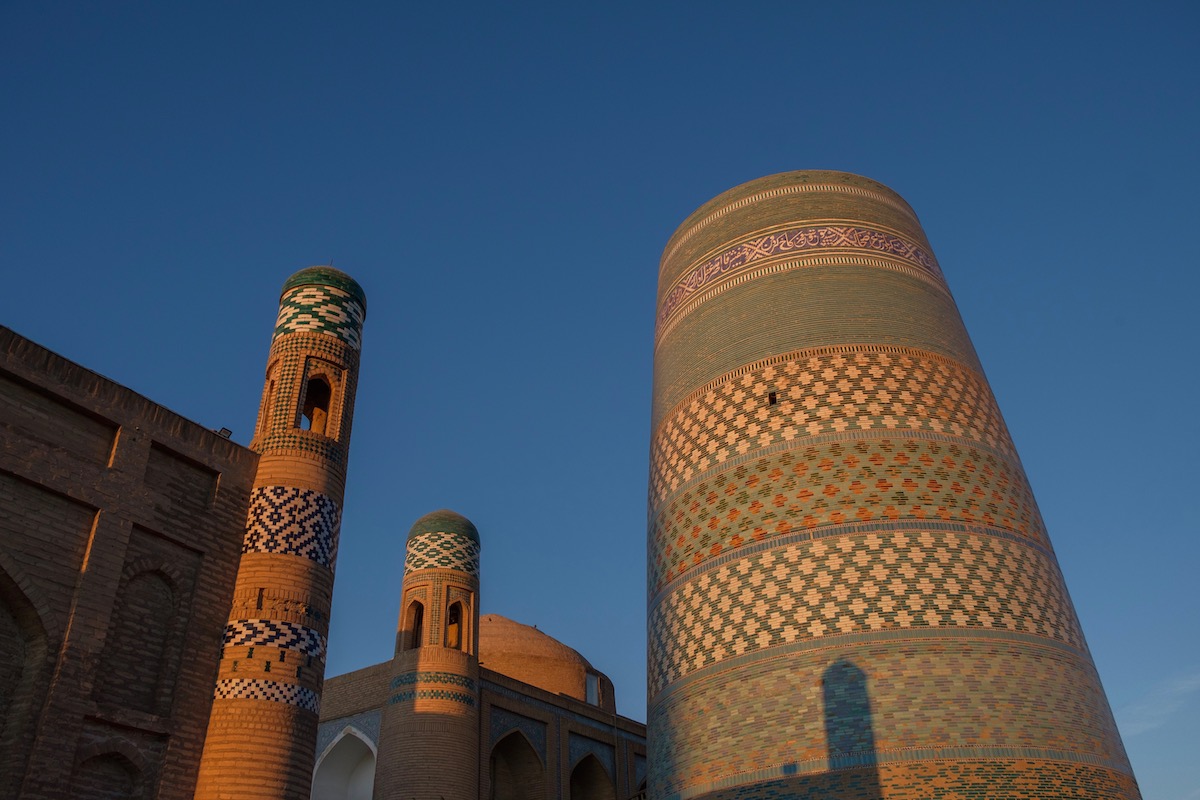 The squat, unfinished Kalta Minor minaret. Construction began in 1851 by Mohammed Amin Khan, who wanted to build a minaret so high he could see all the way to Bukhara. He died in 1855, leaving the blue-tiled structure unfinished.

Locals sharing bread at a wedding. 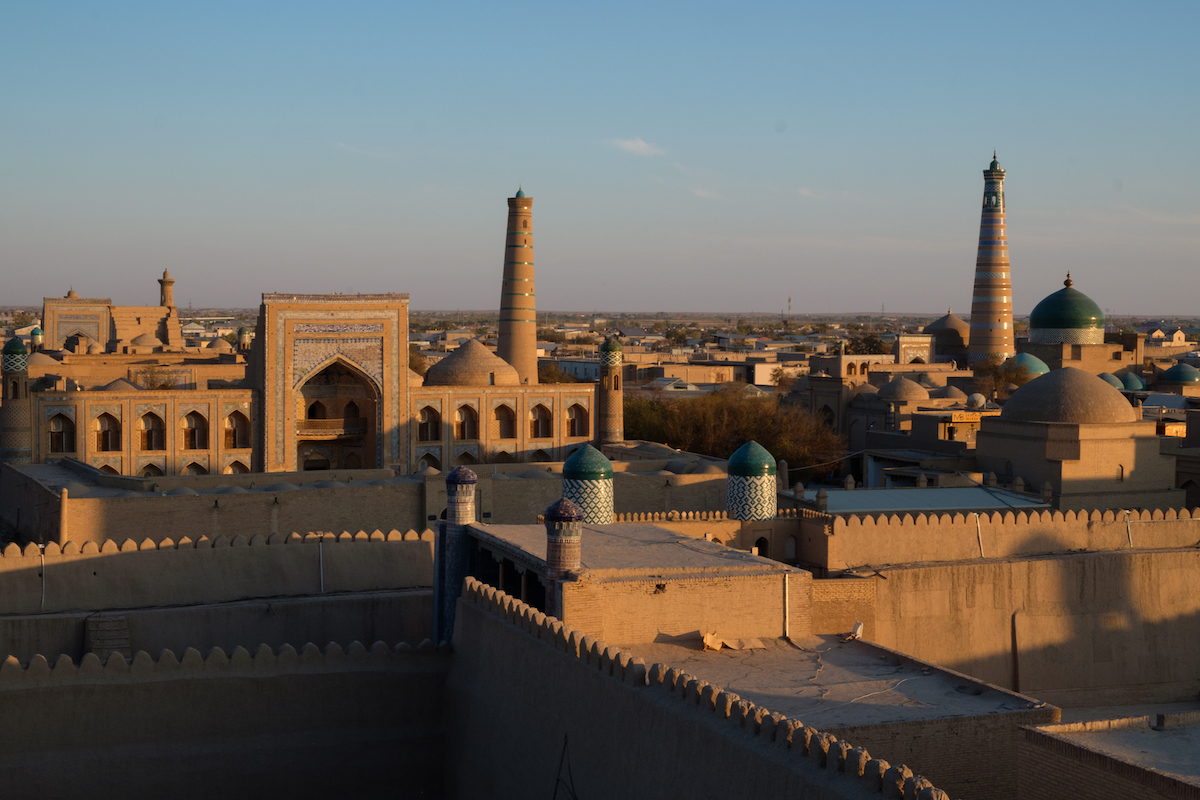 The view of Khiva from the city walls. 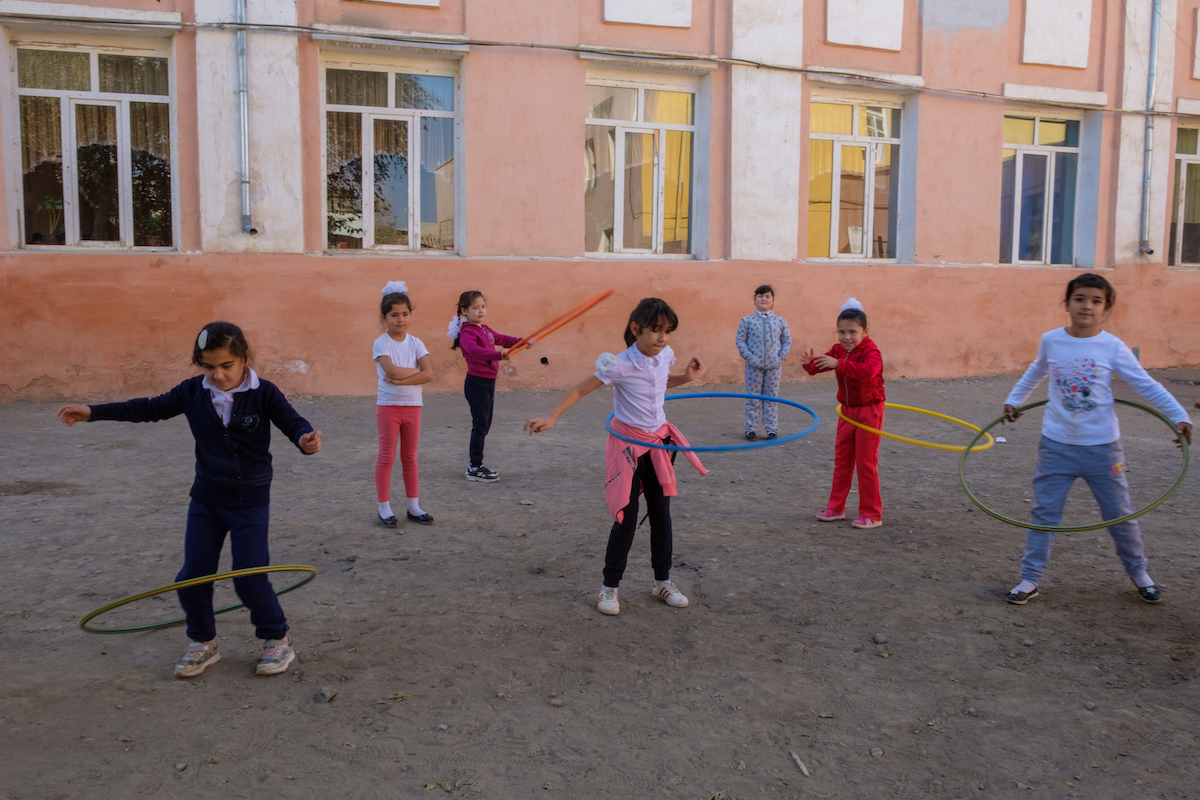 Girls hola-hooping at school. Just to the right, all the boys are playing soccer in a cloud of dust.

Cool old man chilling in front of his house. 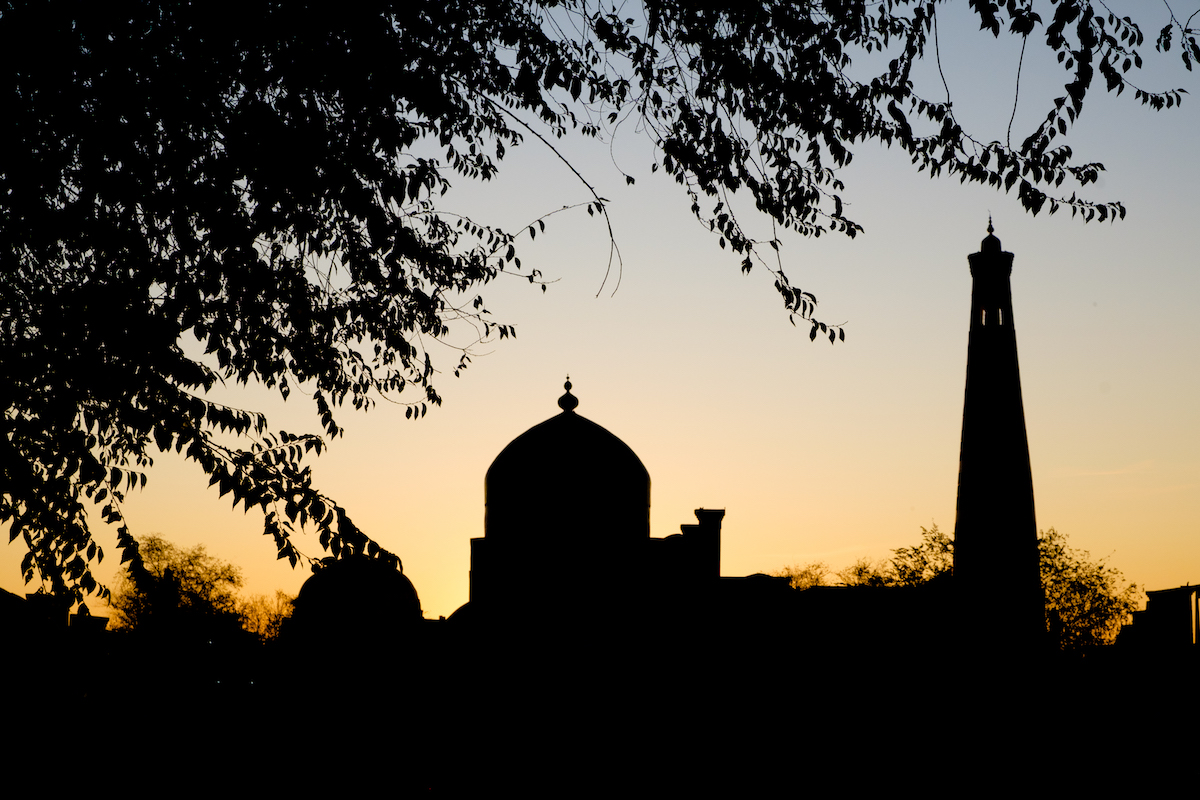 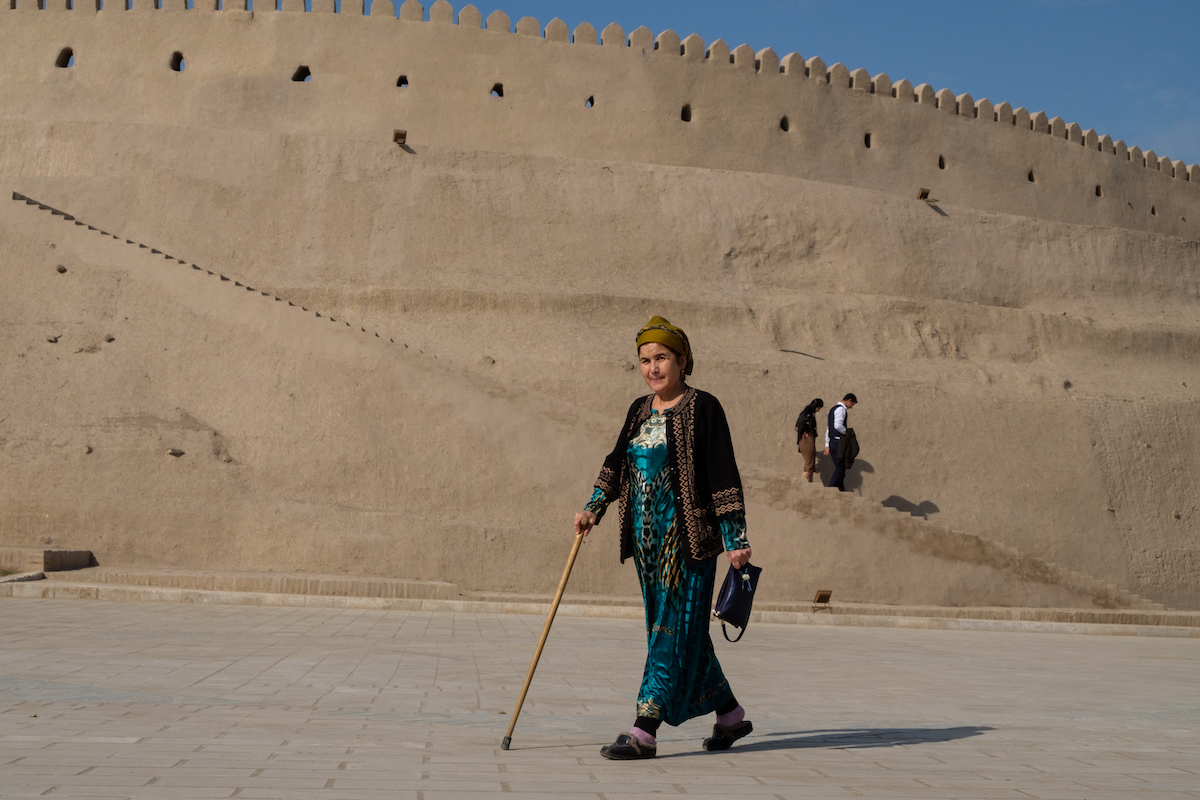 Khiva is surrounded by a big, beautiful wall. 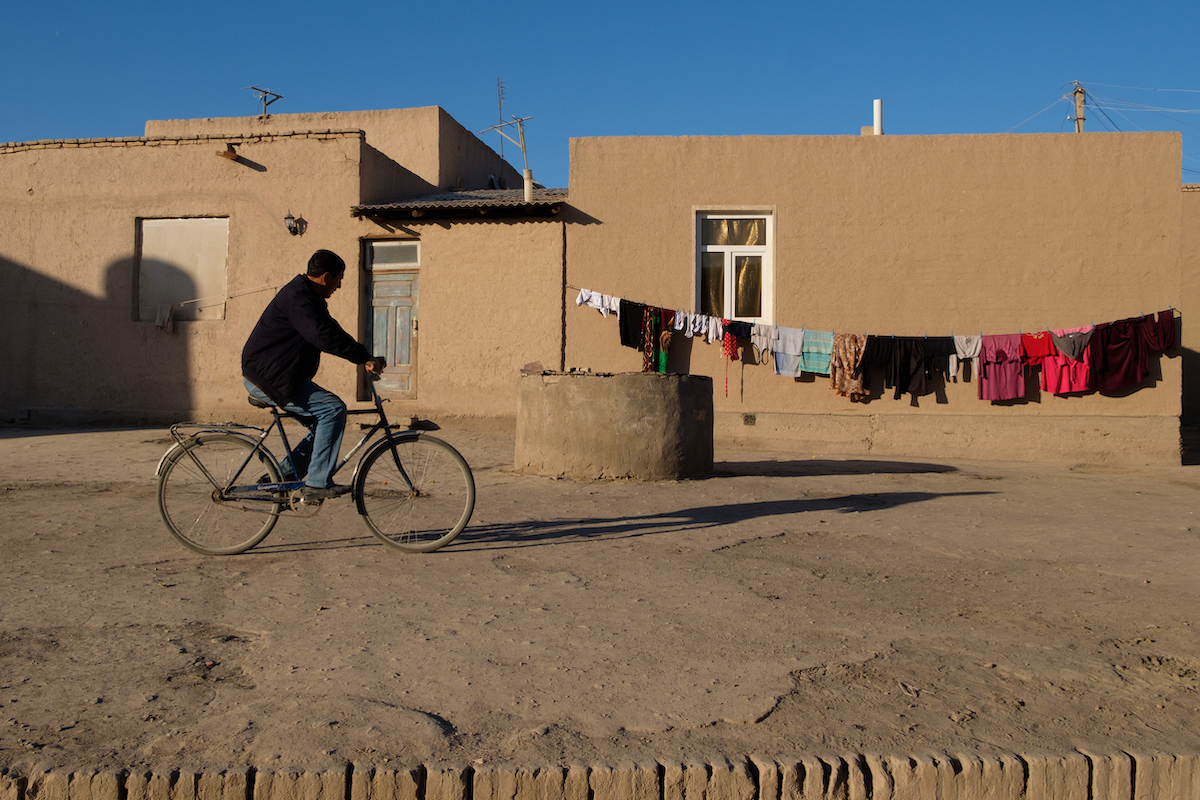 Most of the city streets are unpaved, and the buildings are made of mud or bricks, creating an earth-tone aesthetic. 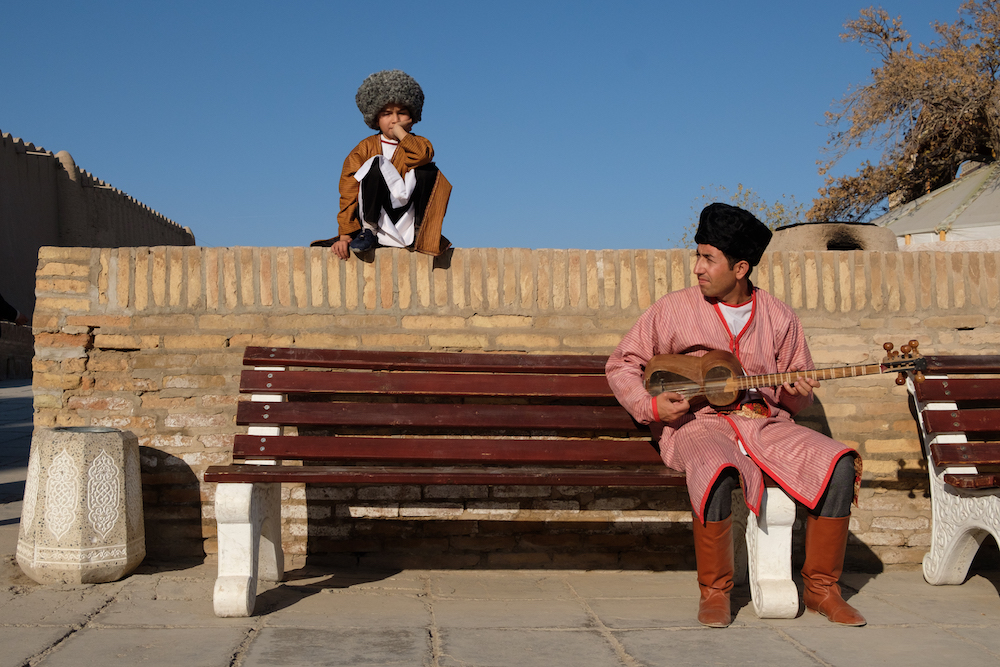 Locals waiting for a wedding ceremony to begin.

This woman and her grandchildren walked by, saw me with my camera, and struck this pose. Uzbeks are amiable people.

One of the opulent, tile-encrusted mansions in central Khiva.

The school kids in Uzbekistan dress formally, with dresses and suit coats.

I traveled to Uzbekistan in late October/early November, the peak of wedding season. I encountered many pre-wedding photoshoots and wedding parties.

At dusk, birds fill the sky, but unlike most Muslim countries, there was no call to prayer. Unfortunately, it is banned in Uzbekistan, which takes away from the atmosphere.

Children on a field trip entertained by a puppeteer. 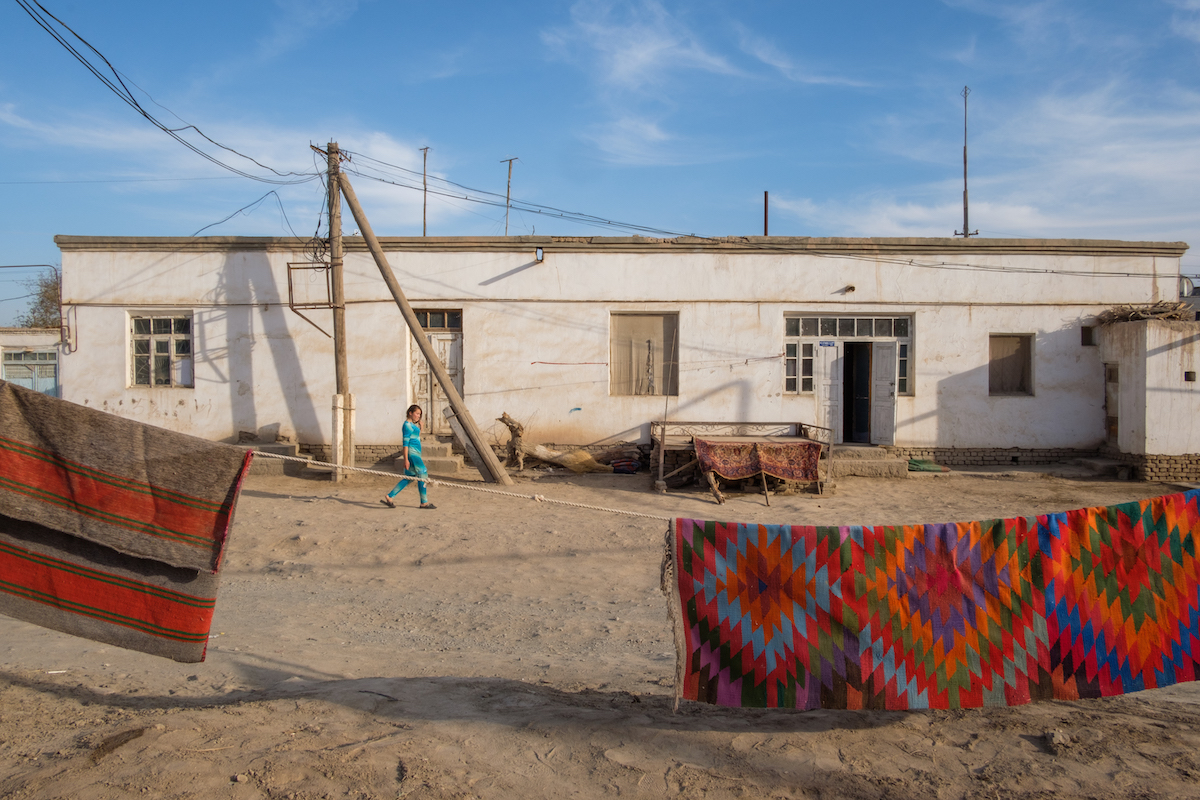 A scene from the residential area outside the city walls. The old town areas consist of earthen homes, many of which are being repaired. Clearly, tourist cash is fueling a building boom.

Group of men playing cards after work. The pace of life is slow in Khiva, and it was easy for me to meet and photograph the locals.

Local woman just walking down the road with her cat, no big deal.

Have you been to Uzbekistan or Central Asia? Is it on your list?

49 thoughts on “21 Photos of Khiva, The Spectacular Walled City in Remote Uzbekistan”