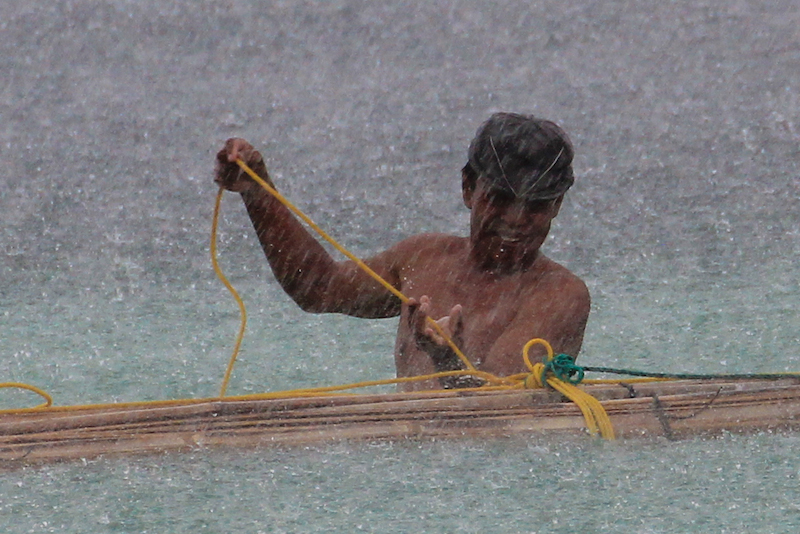 A motorcyclist with a portable food stall speeds by, armed with an umbrella.

I had never heard a racket like it before. I opened the hotel door expecting to see a parade of people banging drums.  Instead, I saw the most intense rainstorm I’d ever seen. We were in the mountain town of Bajawa in Indonesia, and we were getting our first taste of the rainy season. At that moment, I learned that in Indonesia, when it hujans, it really pours.

Every roof in Bajawa is made of tin, and the fat raindrops rattled the roofs like a snare drum. Anyone trying to sleep off a hangover was no doubt in hell. It was raining like a vengeful god was trying to wash away all the sinners into the ocean. So, I did what any normal person would do: I grabbed my camera and headed into the deluge. 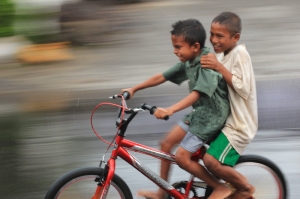 Boys venturing out in Bajawa after the heaviest part of the rain.

I found an awning where I could stay dry and see the street, but I quickly realized that nearly every business had shuttered its doors and the streets were empty save a few frolicking kids. It was reminiscent of a blizzard that paralyzes a city. Although it was 3pm, it was nearly dark. The streets turned into a rushing river, lightning strikes set off car alarms. I made a mental note to never store our bags on top of a minibus again, and to make sure and take my rain jacket everywhere.

Luckily we never got caught in one of the near daily afternoon deluges and our plans were never altered. At our last destination in Pantai Bira in south Sulawesi, the rain was actually a welcome distraction. The sleepy beach town where we were staying was, in a word, boring. Watching the ebb and flow of fisherman heading out to fish or returning for the day was the most exciting thing to do, until the rains came.

In Bira, the locals were seemingly unfazed by the rain. Fishermen took to the sea in flimsy boats, heading into the teeth of menacing rain storms. Men lashed down their gear and tended to their chores as if it were a sunny day. But just to be on the safe side, they were building arks just in case the rains didn’t subside. I felt safe knowing I could commandeer one of the boats in case of an apocalyptic rain storm. 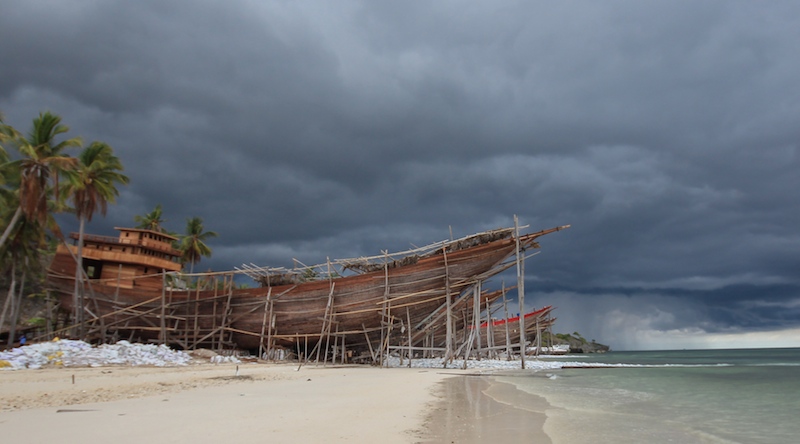 Click on any photo to open a slideshow view. 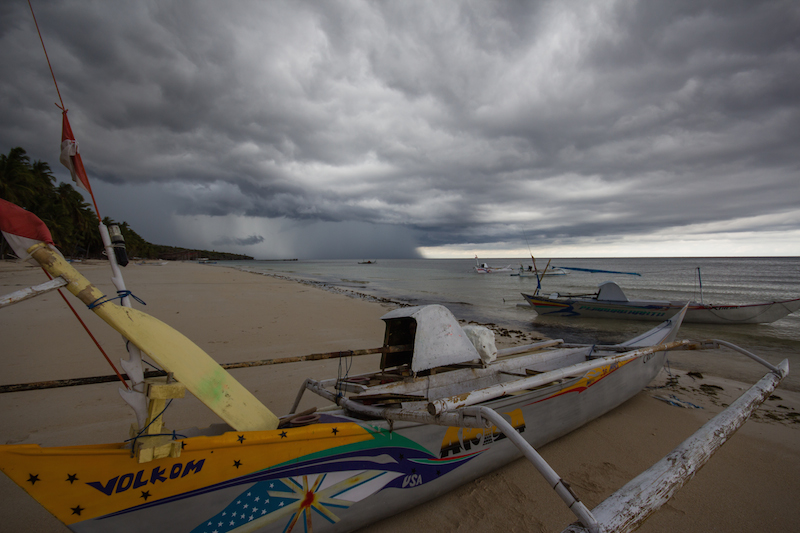 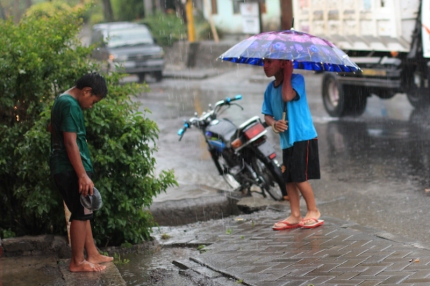 Only the kids seemed to enjoy the rain. 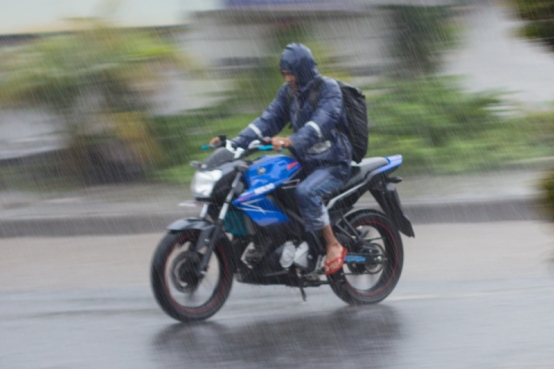 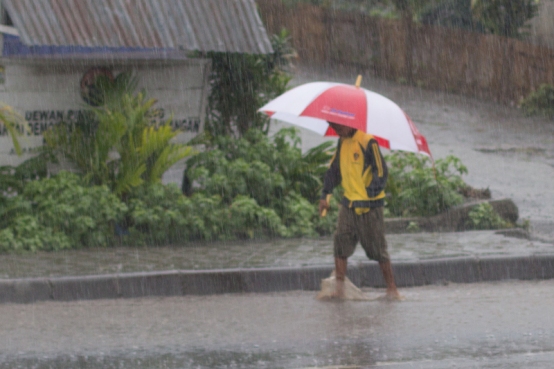 This is how boys clean their feet. 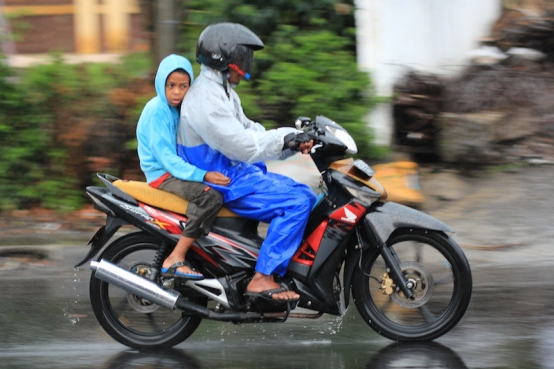 Poor kid has no helmet or rain gear. 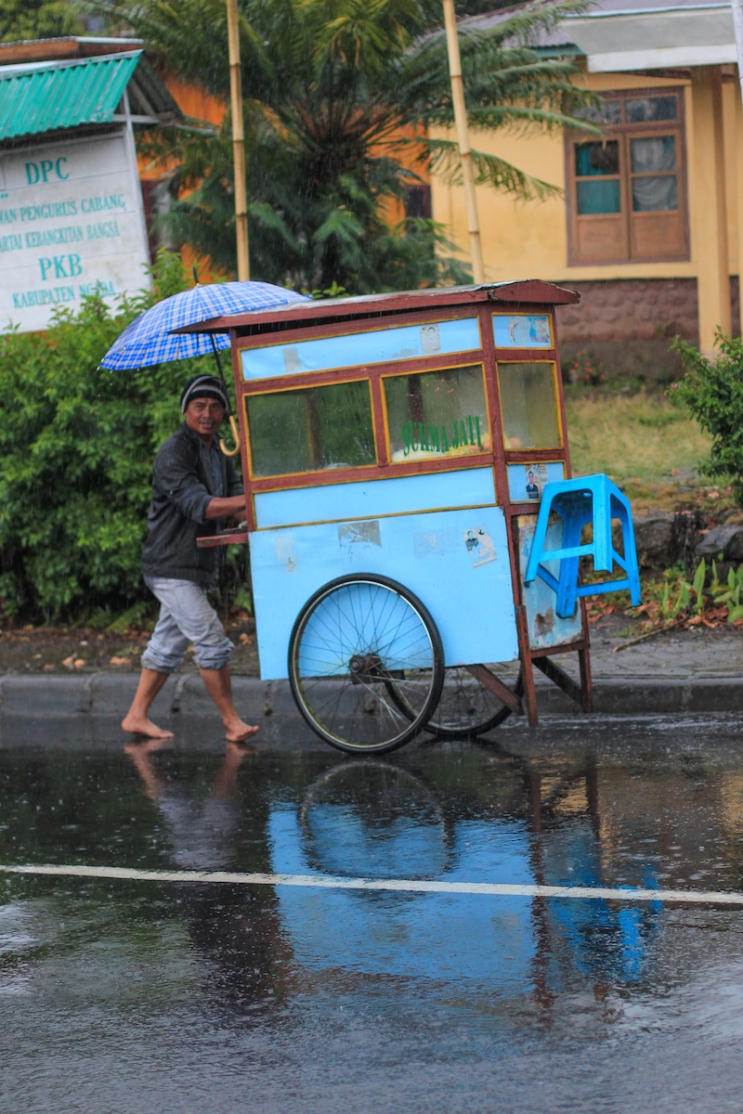 A food vendor is among the first to venture out after the deluge.

It is safe to say that this boy needs to invest in an umbrella or rain gear.

Fisherman at Pantai Bira lashing down something in the ocean during a rain storm. We had no idea what he was doing.

Fisherman returning to shore in the rain in Pantai Bira.

20 thoughts on “When it Hujans, it Pours”