I didn’t know what to expect from the Day of the Dead festivities in Oaxaca, and I was trying not to get my hopes up. After all, many things in this world don’t live up to the hype: New Years Eve, most Super Bowls, Star Wars Episode I.

However, as soon as we arrived in the colonial city we knew we were in for something special. The streets were abuzz with people, the zocalo was packed with vendors, music was everywhere and Catrinas and diablos mingled among the throngs of people. The festivities seemed to be going full throttle, yet the Day of the Dead was still three days away!

Every year at the end of October/first of November, Mexicans take a few days to celebrate the dead. On November 1, or thereabouts, the spirits of the deceased return and family and friends gather to remember, pray and party with the dead. Oaxaca is famous for its celebrations and we went out of our way to be there for the fiesta.

In the days leading up to Dia de los Muertos, small yet raucous parades featuring costumed locals, with marching bands in tow, flowed through the streets, clogging traffic and attracting gangs of spectators. Some parades consisted of kids and others of adults in gruesome costumes who passed out free shots of mezcal as they went along – you gotta love Mexico! Even the dogs took part, with a parade of costumed pets.

Aside from the frequent, noisy processions, the zocalo and squares were filled with activity. Food stalls, craft vendors, lectures, political speeches, rock bands, costume contests, and street musicians all vied for the attention of the hordes of people.

Parade of kids in Oaxaca.

Gruesome costumes at a parade in central Oaxaca.

A Catrina contest in Oaxaca.

A band plays in the zocalo while two young fans dance along. 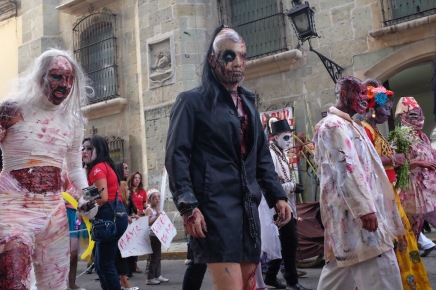 Day of the Dead dog parade 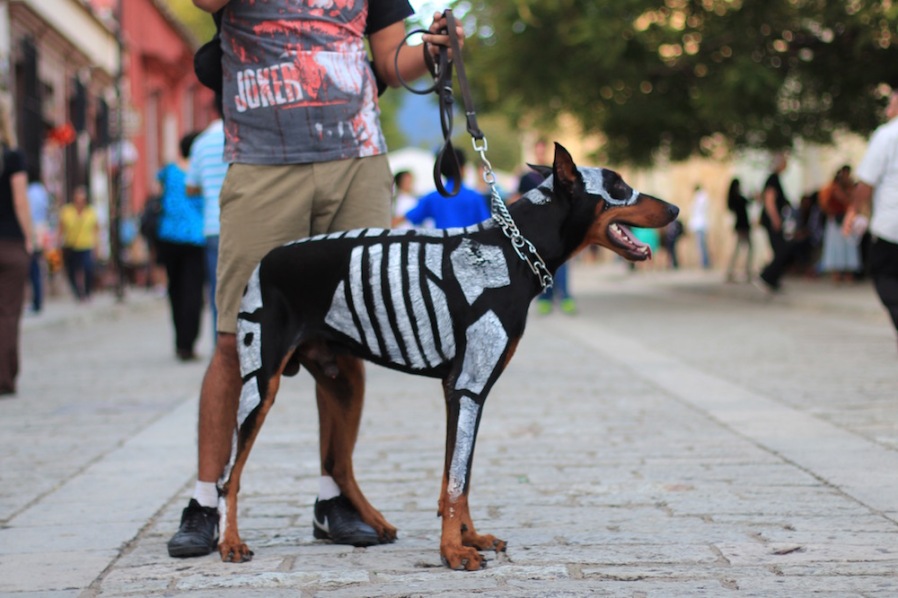 Dancing in the streets.

November 1 – A Visit to the Cemeteries

On the night of November 1, the focus shifted from the streets to the cemeteries. We visited three local cemeteries, all of which had very different atmospheres. First, we went to the San Miguel cemetery, or Panteon General, the main burial place in Oaxaca City. The atmosphere within the cemetery was tranquil and beautiful. On this night, the spirits of deceased children visit the cemetery, so only the graves of kids were decorated. In addition, the burial niches in the old part of the cemetary were illuminated with candles creating an ethereal atmosphere.  Well, to a point…

Near the niches, a makeshift stage was erected in the cemetery and a Beatles cover band was rocking the deceased and living alike. Colored stage lights danced over tombstones and illuminated costumed revelers while crowds of people stood atop tombstones to get a better view. It was a surreal experience.

Just outside the cemetery walls the scene was almost as bizarre – a carnival, complete with games, rides and food stalls – filled the streets. It looked like an independence day celebration, not a day to mourn the dead.

Next, we traveled to the nearby town of Xoxocatlan, known as Xoxo and pronounced ho-ho. Xoxo has two cemeteries, a larger new cemetery and an older, smaller one. The new cemetery was the scene of a riotous party as mariachi bands played while inebriated people danced around graves, nearly tripping over mourners who sat pensively, silently, next to tombs.

The old cemetery was a completely different scene, as all the graves were illuminated with candles and the few mourners sat quietly. Outside the walls, however, was a scene of street food, heavy drinking, loud music, and many people partying despite the late hour.

A mourner lights candles in the old cemetery of Xoxo.

Some mourners sat quietly and commanded the the dead while others partied.

A mariachi band and drinking in the cemetery 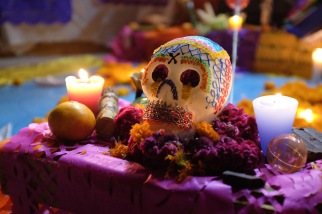 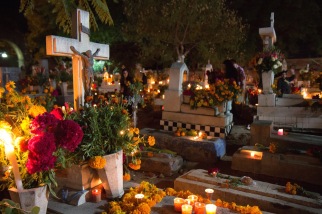 After staying up nearly all night to see the festivities, we had every intention of going to bed early on the 2nd of November. As we had dinner in the Zocalo, the square began to fill up with revelers. Shortly after dark, three raucous parades converged in the zocalo, this time with dancing more wild and costumes more elaborate than the day before. It was a Monday. Don’t these people have to go to work tomorrow?

Swept up in the carnival-like atmosphere, we ended up staying awake late into the night again. “I will sleep when I’m dead,” I thought. Although a couple of times a year, if I’m Mexican anyway, I’ll come back to visit the living and I won’t be sleeping much at all. 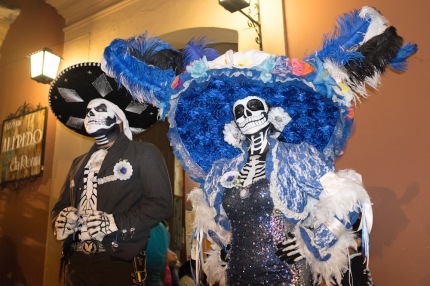 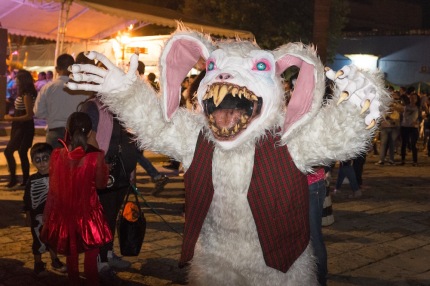 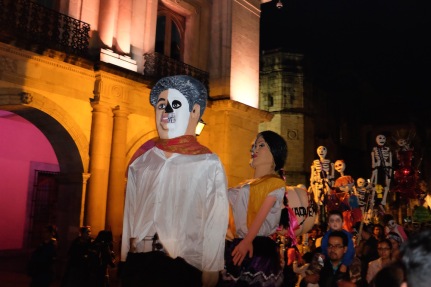 A waiter at a restaurant takes an order. 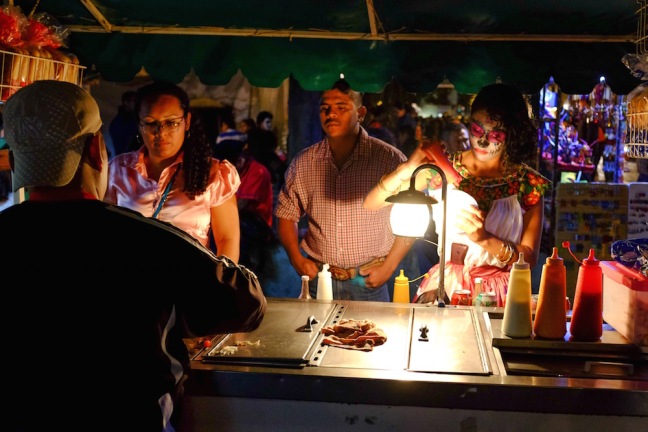 Catrina getting a hot dog.

How do you celebrate the dead where you are from?

Day of the Dead in Oaxaca: A Day by Day Guide (Mexico Retold)

31 thoughts on “Day of the Dead in Oaxaca, or Mexicans Really Know How to Fiesta”