We were in Ayutthya, Thailand, and noticed two signs in front of a restaurant/bar – one in English, the other in Thai script. We were learning the Thai alphabet and one of the few words I knew how to read and write at the time was Chang, or Elephant. I knew this because each letter in the Thai alphabet has a word associated with it, like A for Apple, only in Thai is ช for ช้าง. Chang also happens to be one of the most popular brands of beer. 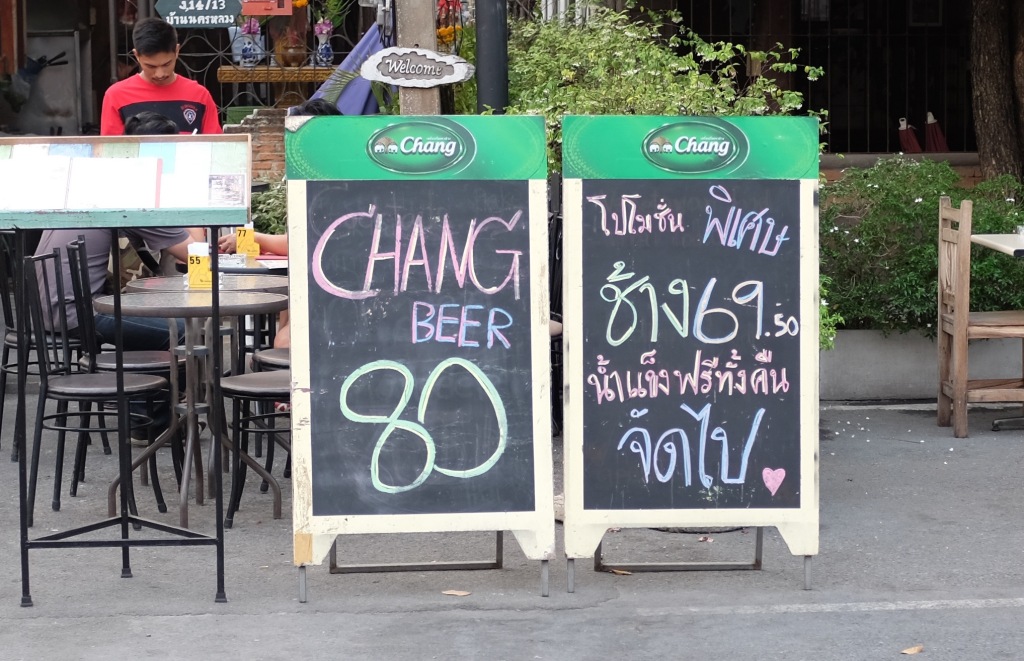 I said to my wife, “Hey look, I am pretty sure they are selling beer cheaper to locals. It is says Chang beer 69.50 in Thai but 80 in English. Plus, there is a heart on the bottom of the sign, a knowing wink.” As we stood there looking at the sign, a bubbly hostess came up and asked if we’d like a table. Maybe, we said, but why are there two prices of beer?

“Oh, for Thai people it is 69.50 and they get free ice all night!” she said cheerfully. Then, realizing what she’d just said, she added, “But since you can read the sign you can be Thai people for the night.”

Listen: 10.50 Thai Baht is only 30 cents US, a third of a dollar. This may not seem like much of a discount, but you haven’t seen the Bells drink. That could end up saving us upwards of $25 by the end of the night.

Even though the discount was small, it raises a larger question about fairness. Is it okay to charge some people more than others?

Earlier in the day at the temples we noticed that the price was 10 Baht for Thai people and 50 Baht for foreigners. I have seen this in other relatively poor countries and I actually have no problem with this. Local people pay taxes that may directly or indirectly go to the preservation of the temples. Even if none of their tax dollars go to the park, they do pay for roads, police, trash collection, and assorted other things that allow people to travel to and enjoy the site.

Dual pricing for Thai and Farang.

I also have no problem with the discount at the bar. I have worked in tourism for many years and we have offered a 10% discount to locals for food and activities. When your customers are a constantly changing stream of tourists, it is nice to reward your local regulars.

However, there are times when this can go too far. Travel writer, school teacher and Thailand expat Richard Barrow, posted on his Facebook page a photo of honey sold at a store/tourist area in Chaing Mai. The price is a whopping 465 Baht, or 13.50 USD, for a jar of honey. Thirteen fitty USD! That better be some damn good honey. It better taste like liquid gold.

But, under it in Thai script with Thai numerals (which aren’t often used) you see that the price is a more reasonable 145 Baht, a huge discount off the regular price. That seems shady to me. If you want to give a local a small discount I can understand, but to be able to sell it to all Thai people at 145 shows just how overpriced the honey must be in the first place. That is a true ripoff.

Mr. Barrow has an entire website dedicated to this subject, with listings of the dual prices all over the country. His opinion is that the dual pricing, if it is going to exist, should be out in the open instead of hidden behind the rarely used Thai numerals.

His website lists a number of places that have the dual price scheme. For example, the Grand Palace is free for Thai people, yet nearly $15 for foriegners. Again, I am okay with this. The Grand Palace is a national treasure, something Thai people should be able to enjoy for free or a cheap price. Asking them to pay 500 Baht would price most of them out of the market.

Mr. Barrow recounts a story of going to a Muay Thai kickboxing match and the price was 2000 Baht for a foreigner and only 450 for a local. He used his best Thai and tried to get tickets at the local price to no avail, and decided to skip the match. It wasn’t worth paying nearly 60 USD for the same seat as someone else, especially because he lives in Thailand and earns local currency. I have to agree – that seems totally unfair.

What do you think? Is this fair? Have you seen this in other countries?

Further Reading: The Argument against Dual Pricing in Thailand – What’s on Sukhumvit

I have photo prints available on my portfolio site.

51 thoughts on “Is It Fair to Charge Foreigners Higher Prices?”