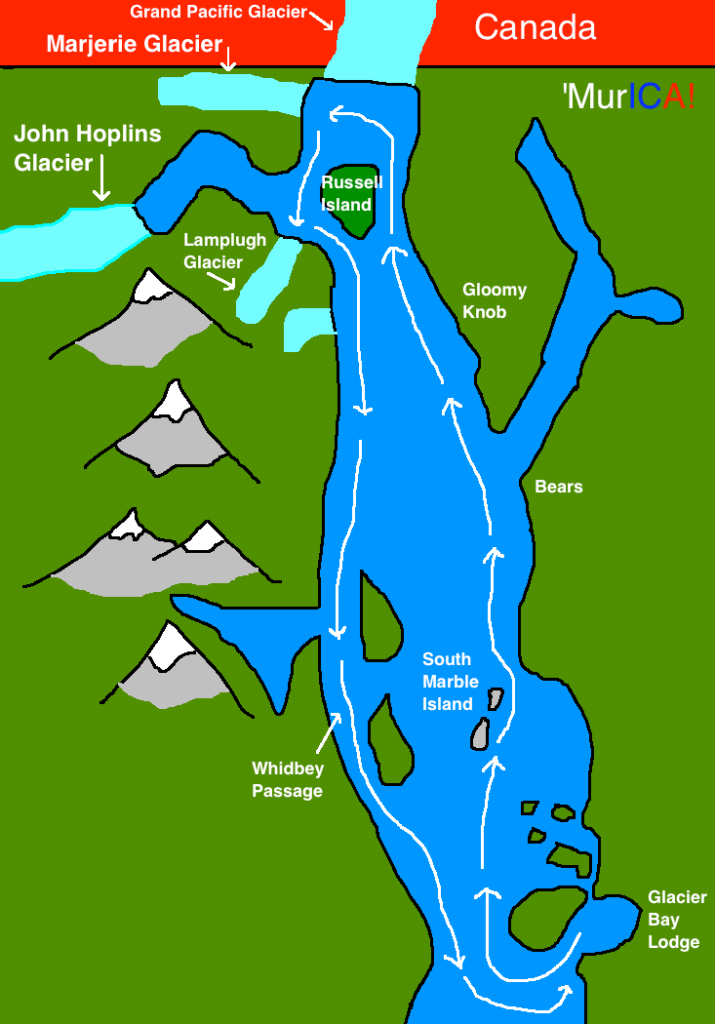 A map of our journey, drawn to painstaking detail.

Maybe I’m biased, or maybe I’m an untrustworthy source because I work in Glacier Bay National Park, but I say that a boat tour up Glacier Bay is one of best things you can do in Alaska. Then again, I’ve spent 11 years traveling around this spectacular state, so I have some authority on the subject. Am I trustworthy? In most cases, probably not, but on this subject I am right.

I will let you decide for yourself. Here is a collection of photos from our tour on Saturday (August 1, 2015) that shows what we saw on our eight-hour tour up bay.

One of the major highlights of the tour happens about an hour and a half into the journey. South Marble Island is a sea lion haul out and the rounded rocks are usually covered with (stinky!) lazy sea lions scattered around, seemingly dead. It looks like Jonestown the morning after.

In addition to the sea lions, this is a nesting bird habitat with sea birds by the thousands. Sea gulls, Arctic terns, horned and tufted puffins, cormorants and guillemonts are among the dozens of species seen at the islands. 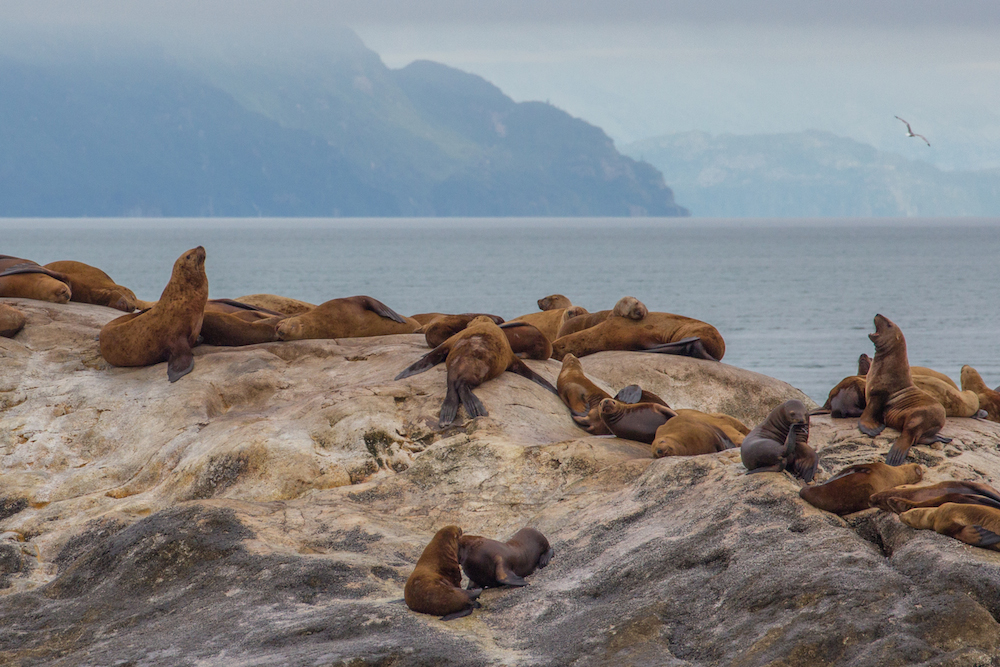 I like to wonder what the sea lions are saying. “Hey Frank! Do you want to come over and watch football tonight?” 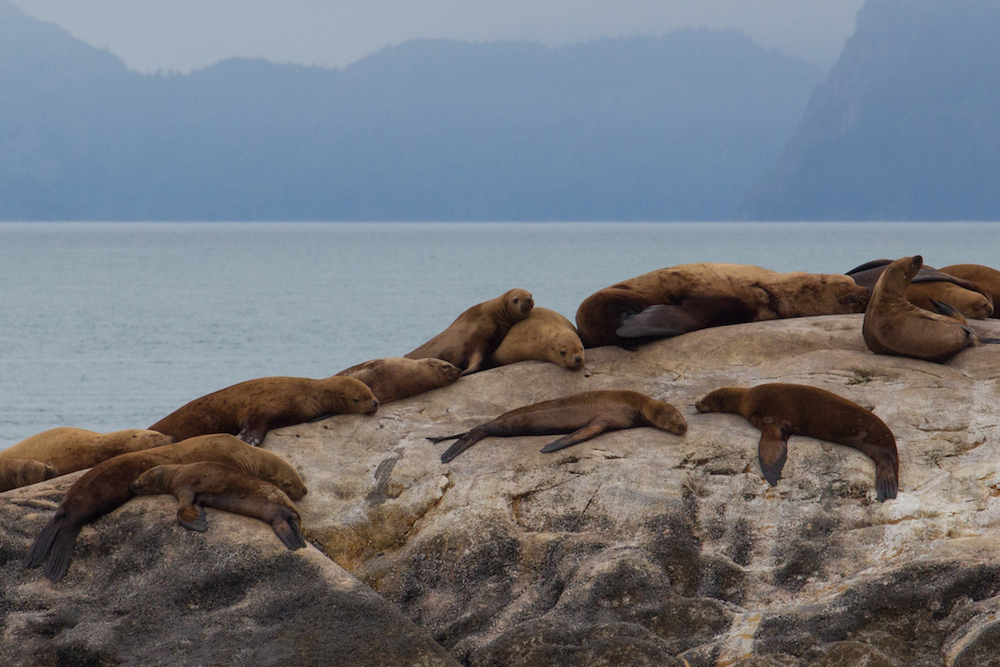 Hey guys, what are you doing?

After visiting the Marble Islands, the boat tour usually follows the eastern shore up the bay to Russell Island. This is a great place to spot terrestrial animals, such as brown bears, black bears, mountain goats and wolves. On our trip, we were lucky to see several bears, a mountain goat, a marmot and several bald eagles on land. In addition, along the eastern shore we saw a pod of killer whales.

At low tide and during salmon run season, bears come down to the shore to look for seafood and fish. This is admittedly not a great photo but it does prove that we saw a bear. 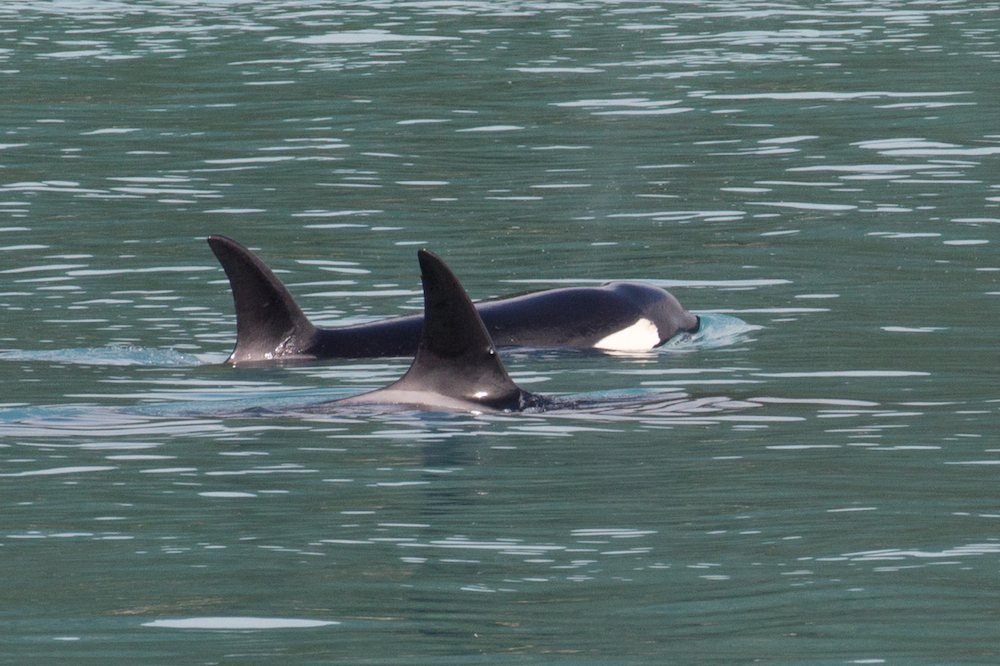 Two megacruise ships are allowed in Glacier Bay each day. Even though they are hideous and out of place, they offer great scale for the glaciers and mountains.

After cruising east of Russell Island, the boat tour has two options: visit Marjerie Glacier or John Hopkins Glacier. Due to time constraints (since we’d stopped for so many animals) we went to Marjerie Glacier. Marjerie is spectacular, but not quite as awesome as John Hopkins. Our great luck with seeing animals meant we’d have to see a glacier that was slightly less mind-blowing. #firstworldproblem 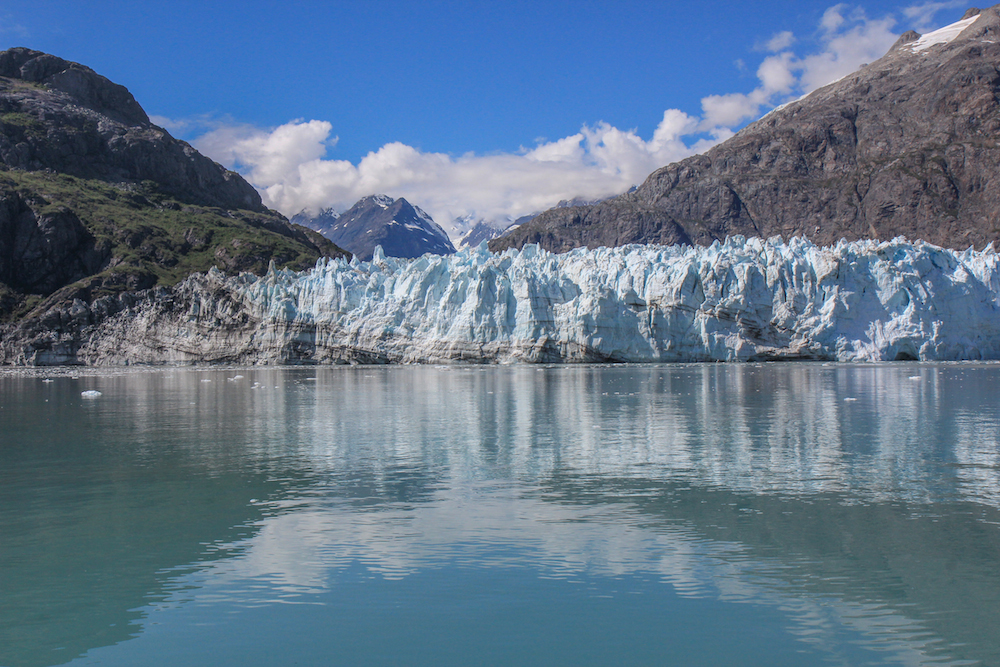 It is hard to believe, but the glacier face is 250 feet high.

What these photos don’t illustrate is the popping, booming and groaning noise of the ice sheet.

On the left you can clearly see the clean and brilliant Marjerie Glacier. It is in America. On the right, you notice what looks like a bunch of dirt. That is actually the Grand Pacific Glacier in Canada. Canada doesn’t take very good care of its glaciers.

After visiting Marjerie, we stopped by Lamplugh Glacier. The boat tour also serves as a ferry for kayakers, and we dropped off a few adventurous souls who were to spend 5 days in the wild camping and kayaking. 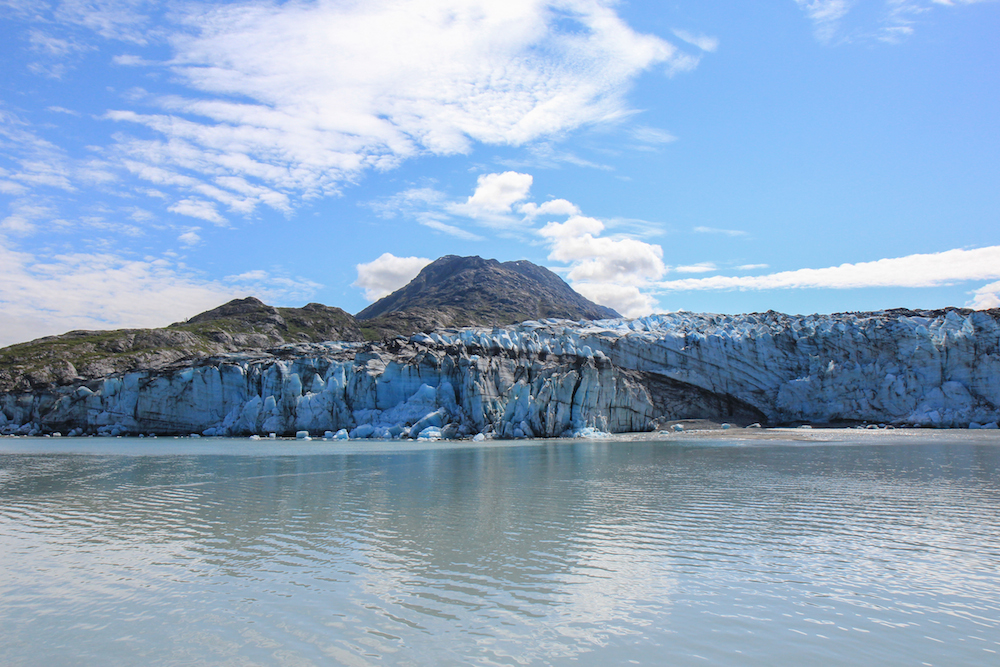 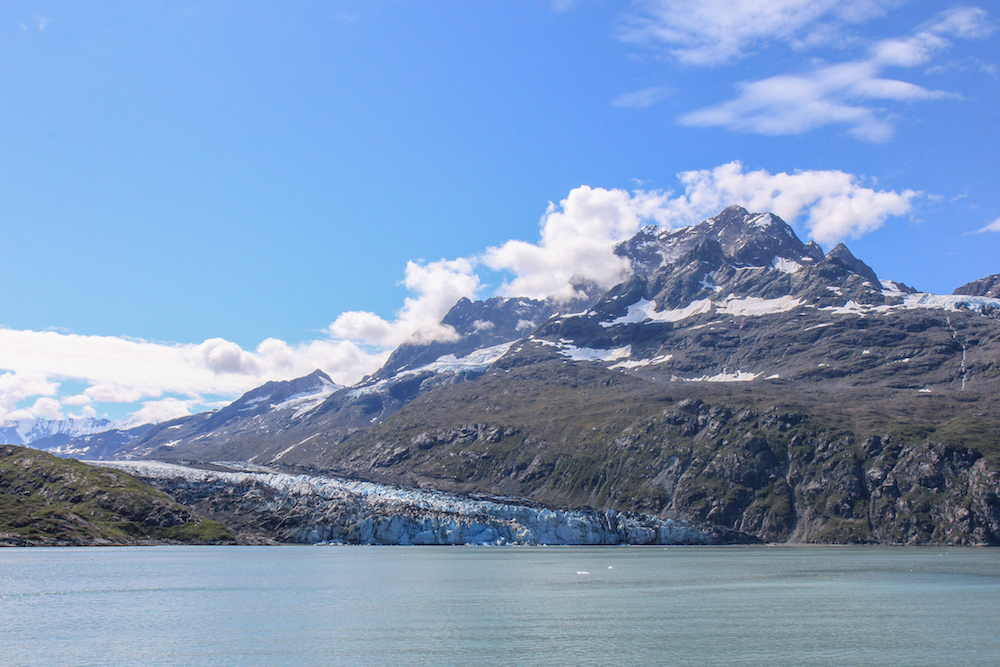 Almost everyone on the boat was drowsy as we made the return cruise home. I drank a beer and contemplated a nap, when up ahead we saw a humpback whale breaching. Everyone was jolted awake. We dutifully grabbed our cameras and went outside.

In the passage, we saw several whales displaying a variety of behavior. Some were tail lobbing, some pectoral slapping, some where breaching, some just blowing snot into the air (aka breathing).

Scientists are not sure why whales slap the water with the pectoral fin. Some believe they are saying hello to tourists, others think they are waving goodbye. 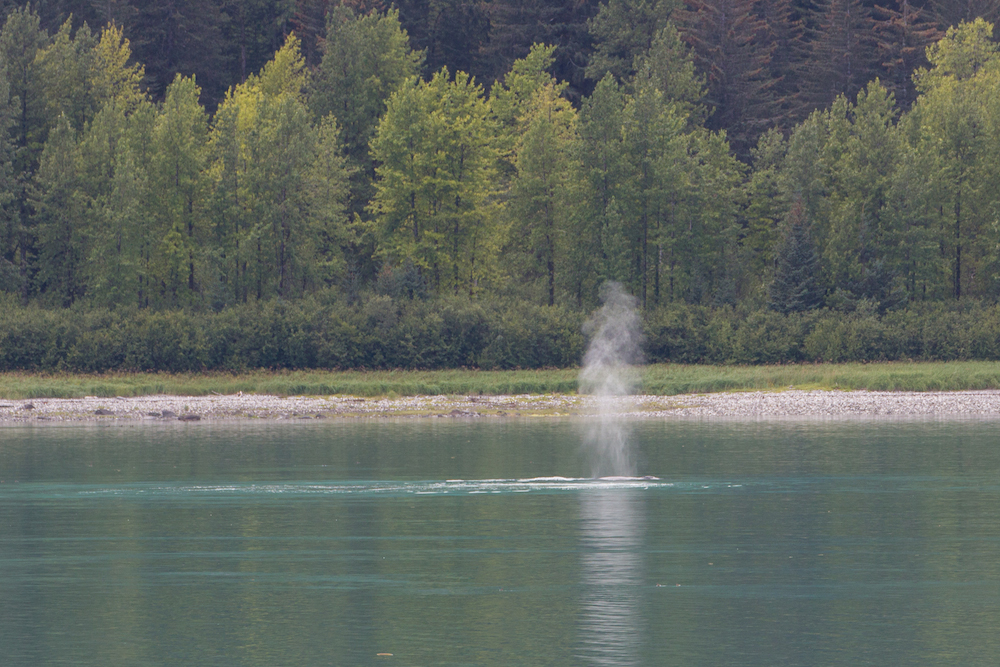 Column of whale breath and snot.

At the beginning of the trip, my lovely wife signed up to become a junior ranger. Part of her duties were to assist the park ranger on the tour, do a service project and complete a booklet of activities. She worked hard all day and earned her junior ranger badge. I’ve never been prouder. 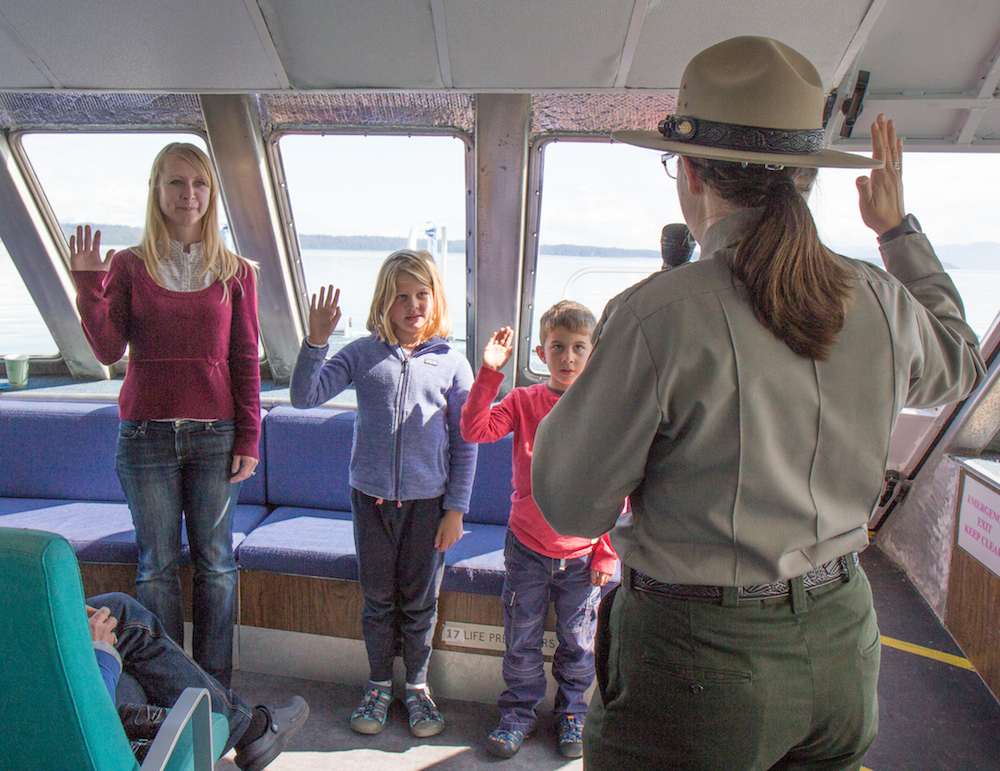 Kristi getting her badge.

So, what is the verdict?

Am I a credible source?

33 thoughts on “Photo Essay: A Cruise Up Bay”