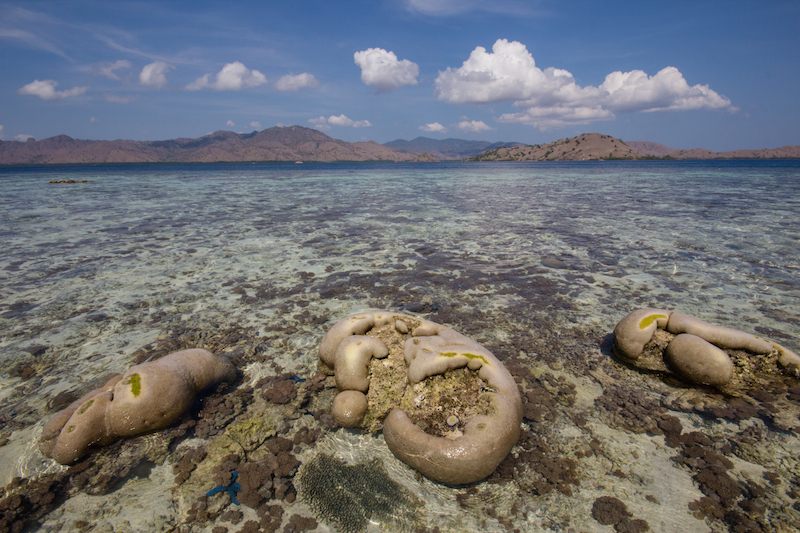 When I was a kid in school learning about Komodo dragons, those mythical giant lizards that live on a few tropical islands far off in the exotic land of Indonesia, I never dreamed in my wildest imagination that I’d go there someday. I dreamed of traveling to the Grand Canyon, Yosemite or Yellowstone. When my imagination was really stretched, I thought going to Europe would be cool. But Indonesia and Komodo? Never.

So, as our boat departed Labuan Bajo at sunrise and took off towards the tawny, rugged islands that are home to Komodo dragons, I felt a certain excitement that is sometimes lost on a jaded traveler. We were going somewhere special.

I could lie to you and talk about our death defying adventures encountering giant lizards or regale you with tales of  swimming with sharks, but the fact is that our trip to Komodo was a soft adventure that was more akin to a vacation than to traveling. We often try to see unique cultures or trek to far off places. This trip was pure fun, with snorkeling, short hikes, camping on the beach, hot Bintang beer and days spent cruising around on the water. Our two days in Komodo were the highlight of our two months in Indonesia, and that is saying something because we had two awesome months in Indonesia!

Our first stop on the boat tour was Komodo Island, where we joined a park ranger for a short hike around the forest in hopes of spotting dragons. I had read several blogs that described these hikes as underwhelming, with Komodo dragons lounging about near the ranger station in an almost zoo-like setting. Perhaps we got lucky, because on the two hikes we did in the forests we saw some cool stuff.

During our walk on Komodo Island we came upon a water hole surrounded by wild boars and deer who were all giving a wide berth to a huge dragon that was greedily lounging in the water supply. As we stopped to watch the dragon, our guide asked how many others we could see. After a closer look around, we saw four dragons that hitherto had been invisible to us. (Note: Komodo dragons are exactly the same color as the trees.)

The next day on Rinca Island, we saw a mother Komodo protecting her nest. It was near a spot where a park ranger had been attacked by a dragon recently. This added a touch of excitement to the hike.

For a wild animal, one bite from a Komodo dragon is fatal due to the toxic brew of venom and bacteria that gets in the bloodstream. It usually takes a few days for the animal to succumb to death. We saw an emaciated water buffalo with a large bite-mark on his hindquarters just waiting to die. The Komodos hunt independently but will join together to feast on the carcass as soon as the buffalo dies.

The fact that Komodos look like tree roots is very comforting.

Even the baby dragons are 4 feet long and sinister looking. 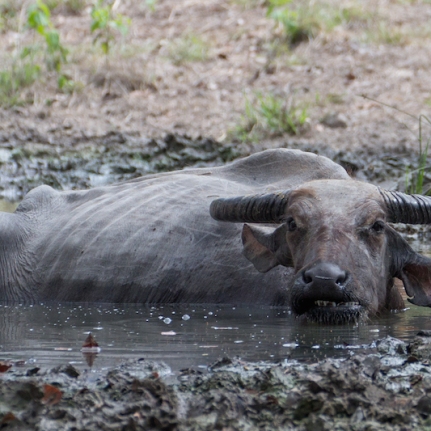 This water buffalo was bitten by a Komodo and is waiting to die. 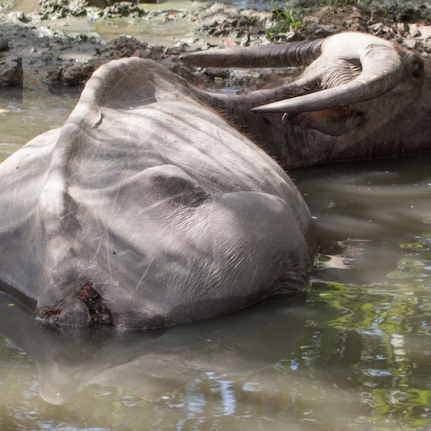 Buffalo dying from a Komodo bite.

Not scary at all. 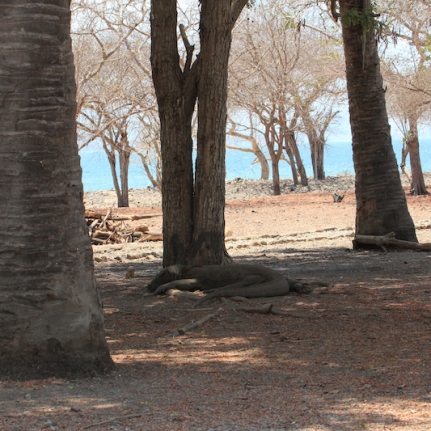 How many Komodos do you see?

Perhaps the highlight of the dragon safaris came at the very end. A girl in our group inadvertently got too close to a dragon who was sleeping under a building at the ranger station. In nature’s universal way of saying STAY THE #$%^ AWAY!, the dragon opened his mouth and hissed angrily. Of course, we all ran towards him with our cameras.

After our morning trek, we cooled off with a snorkeling excursion around Pink Beach. Although Komodo is home to dragons, rugged mountains and drop-dead gorgeous beaches, the real highlight of our trip was the underwater world. If I were an underwater photographer, in this space you’d see photos of sea turtles, manta rays, toothy barracudas, kaleidoscopic corals, and myriad species of colorful fish. Alas, I am not. I am lucky that I didn’t drown, so taking photos in addition is out of the question.

So you will have to take my word that snorkeling was the highlight of our trip. (For great underwater photos, check out Indah Susanti’s blog. She is an Indonesian with awesome undersea photos.)

The currents were raging around this tiny island. As a result, the protected side was a refuge of thousands of fish.

Camping on the beach

At the end of day one, we retreated to our campsite where we ate fish, watched a stunning sunset and drank hot beer around a campfire. Pure bliss. At night we pulled our beds out of the tent and slept under the stars. The moon and stars were so bright, it was almost difficult to fall asleep.

Not a bad place to camp.

The morning of day two brought close encounters with manta rays and a swim to a spectacular deserted island – you know, just another routine day in Komodo. One of the guys in our group had the brilliant idea of doing a jumping photo on the deserted island. This may be one of my favorite pics from the trip. 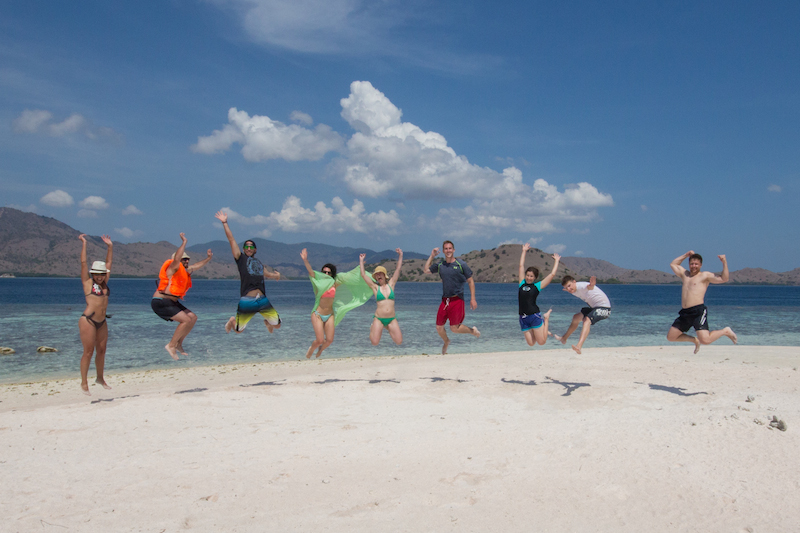 Shortly before sunset, we visited Rinca village where we toured the town and visited the school. All the houses are on stilts, you know, to keep the dragons out. The lone exception is the school which is protected by a concrete wall. Unfortunately, a few years ago (before the wall was built) an eight-year old boy was eaten by a dragon at school. (As if middle-school didn’t suck enough, with bullies, acne, puberty and demanding teachers, these kids have to worry about getting eaten by a dragon too!)

It was an interesting visit to the village that gave us a glimpse into the lives of the people that call these remote islands home.

Girl on a pier at Rinca Island. 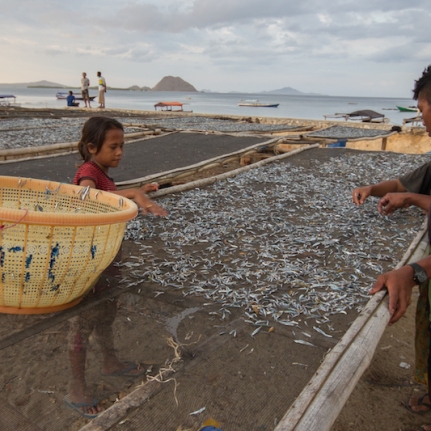 The girl in the purple skirt is in dozens of my photos, always with that scowl on her face.

The school at Rinca Island.

At sunset we anchored near a mangrove island that is home to thousands of bats. Each night at dusk, they take flight, going inland to hunt insects. As we waited in the silence, a few bats took flight across the red sky, then a few more, then a few more. Eventually, the squeaking of bats and the beating of wings filled the air.

We set sail for Labuan Bajo under a dome of stars, with bats flying by high overhead. It was a beautiful end to two great days in Komodo. I had no idea that traveling to this remote land would be so much fun.

Waiting for sunset and the bats near Rinca Island.

Thousands of bats flying out of the mangroves at night.

What are some of the great wildlife spectacles you’ve seen?

Note: we did our tour through Flores XP, a company owned by a Italian-Indonesian couple that I’d highly recommend.

59 thoughts on “Komodo National Park: One of the Great Wildlife Spectacles on Earth”