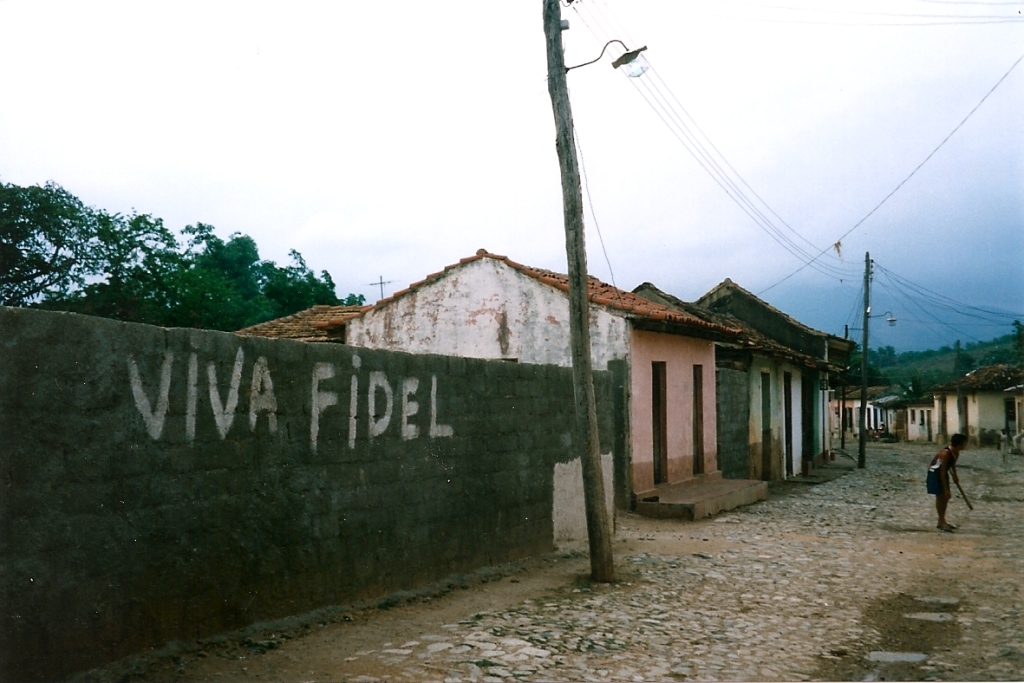 Viva Fidel painted on a wall in Trinidad de Cuba.

“Que es eso?” Asked the humorless customs agent as he held up my toothbrush. The Cuban officials at the airport in Havana had emptied the entire contents of my backpack on a metal table and were going through them item by item, making me explain everything. It was becoming increasingly more difficult to keep a straight face. I wanted to tell him that it was a secret listening device, but one thing I have learned is that people in officialdom are impervious to sarcasm.

That was the year 2003 and I was traveling to Cuba on my own, on a whim. Japanese and European tourists with rolling luggage and giant cameras swinging from their necks went right through immigration. As a solo American, I was getting a more thorough questioning. It was a bit stressful. Had they arrested me, it wasn’t as if I could call my embassy.

After an interrogation that lasted about an hour, the Cuban guard reached across the table, shook my hand and spoke to me in English for the first time. “WELCOME TO MY COUNTRY!” he said with a huge, beaming smile. He was instantly transformed into a friendly man as soon as he deemed that I wasn’t a spy. I walked out of the airport, into Cuba, back in time about 50 years, and right through the American embargo. It turned out to be two of the best weeks of my life.

With the thawing of relations and easing of the embargo by the Obama administration, I think big changes are ahead for Cuba. There will be an influx of American tourists, money, and maybe more freedom for the people of the island nation. This makes me both sad and happy. I’m sad because the amazing country that I visited in 2003 will be transformed so completely once capitalism comes charging in that it won’t be recognizable. There will be mega-hotels, flashy new cars, a wide gap between rich and poor and thousands of sweaty, American tourists waddling about like penguins.

But when change in the form of economic and political freedom comes, overall it will be great for the Cuban people. The Castro regime and Communism are still alive and well, but I think more contact with Americans and more cash into the economy will hasten change. The Castros have held up the embargo as an example of American imperialism and have argued successfully that they are the bulwark between the Cuban people and Yankee domination of the island.

At the time of my trip, it was necessary for foreign tourists to have their first three nights booked in an overpriced state-run hotel. I created a fake email confirmation, something that multiple customs officials closely examined and questioned me on.

As soon as I walked out of airpot after my tense interrogation, a lady said to me, “Do you have a hotel?”

“Do you want to stay at a private home?” she asked.

And just like that I ended up staying with a cranky octogenarian in downtown Havana for $30 per night, vs. the $75 or so for a hotel. Capitalism is difficult to stop.

The next three people I met managed to rip me off. Then I met a guy named Damaso, a smart, young black man with perfect English. He offered to take me around to see the city. We went to the Colon Cemetery and walked through a variety of districts. There are police officers on every corner in Havana, and twice during our city tour Damaso was stopped, questioned and forced to show his papers. He cooperated politely, but he couldn’t hide the annoyance and disgust on his face.

That evening we ended up having a few beers in a local restaurant that was supposed to off limits to tourists. I was very tan then and had on some Cuban-esque clothes. Damaso did the ordering, I did the paying, and we both did the drinking. Tourists at the time were required to spend U.S. dollars (ironically the currency of the enemy) while Cubans used pesos that were about as worthless as toilet paper. We were spending Cuban pesos and it was like drinking for free.

Damaso said to me, “Is it true that in America if you have a car accident, they check to see if you have health insurance. If you don’t, they let you die in the street?” I told him that this was a lie. He asked me hundreds of questions about America, and I asked him hundreds about Cuba.

Damaso was articulate, passionate about his country, well educated and he sexually harassed every pretty girl we saw.

“They like it,” he told me. “It makes them feel good about themselves.”

After a day with Damaso we were walking through the Central Park on the way back home and a portly hooker shouted something at us.

“I had her once,” he replied taciturnly.

When change comes, Damaso will be able to walk around freely without being harassed by the police, tourists will be able to go where they please, and girls won’t have to sell their bodies. And if they do, at least they can get more than $2 per trick.

Beach near Trinidad just waiting to be violated by mass tourism.

From Havana I went to Trinidad where I stayed a week chilling on the postcard perfect beach and hiking in the nearby mountains. The beach in Trinidad and the quaint colonial town will be the first place to be ruined when capitalism comes. The beach stretches on forever, powder soft and gleaming white. It leads to clear water that is bathtub warm. It is pure, quintessential Caribbean. There was one hotel on it. There will be 30 big ones in the future.

In Trinidad a girl proposed to me, well sort of. She gave me her address, said we should write each other and get married. I met an Italian girl who had been proposed to by a local man. The Italian girl was – how do I say this politely? – one of the ugliest girls I’ve ever seen. The Cuban man proposed to her because he thought she might be desperate enough to marry him, I assume. Marriage is one of the only ways people can get off the island.

My plan was to go all the way to Santiago and fly back to Havana. In the weeks before my trip, that flight was hijacked two times and flown to the Florida Keys. That would have been an awkward situation if I’d have suddenly arrived in Key West, trip aborted. I’d have been on the news though. “American Man Has Vacation Cut Short,” would be the headline. I bet FOX News would have destroyed me. I can see a smug Bill O’Reilly or self-righteous Sean Hannity mocking me. Jon Stewart would have lampooned me in the opening monologue.

Freedom of travel and emigration will be great for the Cuban people and they won’t have to hijack airplanes, or worse, propose to ugly girls, to get off the island.

At the time, U.S. credit and debit cards did not work in Cuba. I came with $650 cash and had to ration very carefully. The last two days in Havana, I had $6 each day to spend on food and drink. I ate one meal a day – a massive $4 pizza that they served at a tourist place on the Malecon. Locals would walk by and scoff at the American eating an extra large pizza by himself. Once a fat woman and her kid walked by and she asked for a slice. I declined but she said it was for the child – he was hungry. I gave him a slice but she took it and ate it. Puta.

Being able to use credit cards will be nice, but there aren’t many regular places to spend money in Cuba. The island nation is truly communist. There are no signs advertising cars or iPhones or houses or shampoo. Cubans live on a ration of $10 a month but most everything is paid for. They have some of the best hospitals and doctors in the world. They have a great education system, with literacy rates approaching 100%. Of course what they read in the state newspaper is propaganda, but still. They don’t have street crime or organized crime for that matter, because there is a heavy police presence, but still. Cubans say they live without the good and without the bad. It is true. Arguably, they are better off than their neighbors in crime-ridden Haiti, Honduras and Guatemala. But there is no American Dream, no opportunity to succeed and make a better life.

That will change when capitalism comes. There will be rich and poor, there will be more good, more bad, more iPhones and cars and more unemployment and more struggle. 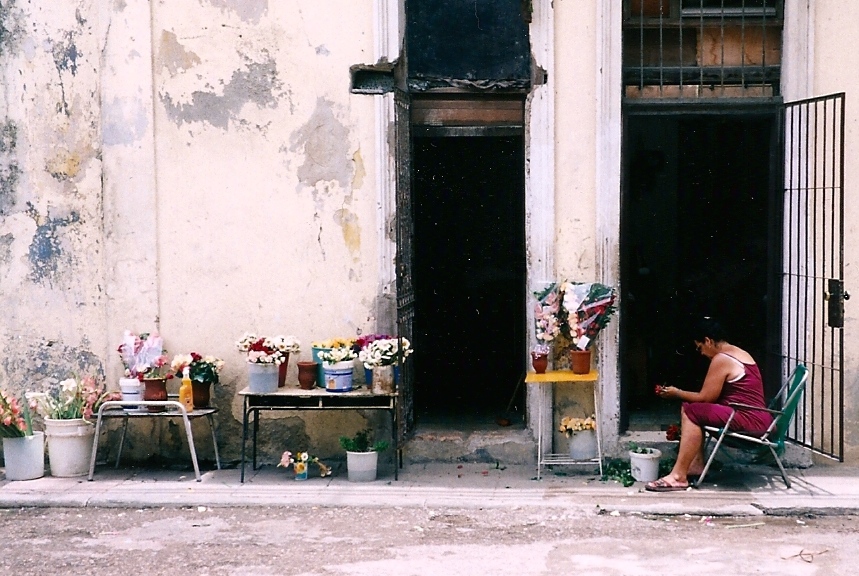 During my visit there were almost no shops or vendors and there were no signs or adverts. That will someday change.

Returning to America after Cuba

I flew back to Guatemala City and then traveled overland through Mexico to El Paso. I was extremely nervous as I went through customs. Cuban immigration doesn’t stamp your passport, so there was no incriminating visa, yet an examination of my passport would show that I flew from Guatemala and returned two weeks later, but didn’t actually go anywhere.

The man at the American border was a chilled out, avuncular man who had the relaxed air of a man days away from retirement. “Where have you been, son?” he inquired nonchalantly.

“Hell, you could have done that here! Welcome home, son.” He returned my passport and I was back in the USA.

Had he known I went to Cuba, I am sure the contents of my bag would have been spread across a large table.

There are no billboards or signs for businesses, but communist propaganda is scattered about. 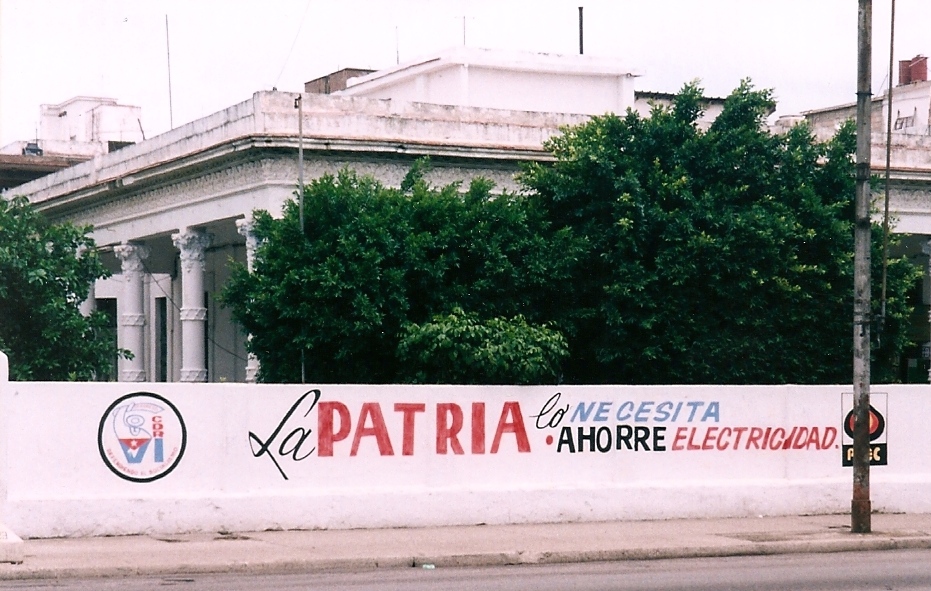 All over Cuba there are signs of propaganda like this one imploring people to save electricity. Not a bad message, actually.

All the cars are old school American models. It is terribly photogenic and nostalgic, but it has to be a pain in the ass to keep them running.

The grand Colonial architecture in Old Havana is crumbling. The island desperately needs and infusion of cash.

I visited shortly after the invasion of Iraq. Cuban newspapers featured cartoons such as this one.

Have you been to Cuba?

Is it time to end the embargo?

Related: Cuba looking to replace Venezuela oil with US Tourists

31 thoughts on “Memoirs of My Trip to Cuba, or Change Is Coming”