Today, I am going back to Rome. When I went 12-plus years ago, it was the most hectic, chaotic city I’d been to at that time. Although I loved it, I never did quite relax and enjoy it. Now, having been to much crazier places like Delhi, Cairo and Disney World, I expect it will be a different experience.

In addition to Rome being chaotic, there was another factor that contributed to my anxiety: I was visiting five days after the 9/11 terrorist attacks.

On 9/11, I watched in shock and horror from a hostel in Switzerland, as the twin towers burned.

I watched with four other Americans, all of us sick to our stomachs. A Swiss guy came over and started laughing at the TV. “Not all people at the Pentagon are good people,” he said with a evil laugh. I thought my traveling companion, Kyle, was going to strangle him. I was afraid that this was going to be the general consensus among Europeans, but that was not to be true.

On September the 12th, we went to bucolic Cinque Terra, where we spent four days far removed from the world. The terrorist attacks seemed more like a bad dream, not reality.

Then we went to Rome. We were thrust back into the world – a world of fear and uncertainty.

Immediately upon reaching the city, we walked out of the train station into the middle of a Palestinian rally. At the time, I understood little about the Middle East. I just knew there were angry Muslim people protesting in the street and a few days earlier, angry Muslim people had attacked the World Trade Center. (Now, having been to Palestine, I support their cause. Sorry, Israel.) It was a jolting, disconcerting welcome to Rome.

In Europe, there was a palpable sense of dread and anxiety. Everyone seemed to know that some sort of war was imminent, and there was concern over further terrorist strikes in the USA or Europe.

At piazzas in Rome and squares all around Europe, there were shrines to the dead, shows of support for the USA and the victims. Almost everyone we met, upon learning we were American, offered heartfelt condolences. Europe was with us, something our leaders squandered by going to war with Iraq. 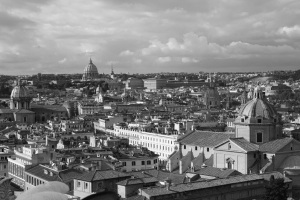 Our last day in Rome, we checked into our third different hostel in three nights (long story). We left our backpacks in the care of the front desk agent, who upon checking us in and seeing that I was an American, proceeded to give me his unvarnished – and unsolicited – opinion of George Bush. “Bush is a bad man. He will start wars. He will attack Iraq!” he declared.

At the time, I was in full support of Bush, of my country. He had 90% approval ratings. Hell, I even liked Cheney at the time. Plus, the idea of attacking Iraq over the terrorist attacks seemed ludicrous.

These were fighting words, but I wasn’t going to get into an argument with the guy who I was entrusting to watch my belongings. Twelve years later, I realize his statements were eerily prophetic.

Twelve years after that horrific terrorist attack, the world is most certainly a different river. Now a 35-year-old married man, I am certainly not the guy I was then.

What do you remember thinking and experiencing in the week after?