I remember checking into a hostel in Copenhagen in 2001 and thinking I might have accidentally checked into a homeless shelter. Across a cavernous arena stretched never ending rows of bunk beds. I got the last bed high atop a three-tier bunk. From my lofty perch, the prospect of rolling off to my death was a real and terrifying prospect.

When I finally settled down to sleep, a chorus of snores rattled the building. I seriously thought the vibrations might be strong enough to bring down the roof. It might have been the worst sleep of my life, but luckily, I had been to the Freetown of Christiania earlier that evening, and so slipping into an unconscious state wasn’t all that hard, considering the circumstances.

The next morning, a rather sizable queue snaked outside the two bathrooms for the 100+ hostelers. I waited in line, impatiently, behind seven other fidgety people with crossed legs. I’d never had to pee so badly, and I wondered with some degree of panic whether or not a bladder could rupture.

Then, in that moment, something magical happened. Brushing her teeth in one of the two sinks, was a Scandinavian Blonde-Bombshell-Super-Model. Mesmerized, I was distracted long enough to hold it until the bathroom became free.

I was 23 years-old. It was my first time traveling. No hostel was too dirty, no bus ride too long, no street food too sketchy. I was unemployed, young, hearty, liberated and happy. And about to be broke. The end of the trip would mark the end of my savings.

Truth be told, that miserable hostel, complete with snoring, dodgy sanitation standards and two toilets, was one of the better places I stayed. We stayed in a hostel in Switzerland where the mattresses were laid out on the floor, each one next to the other, each bed the size of a camping sleep pad. I fell asleep trying to be as still as possible, not wanting to roll over and accidentally cuddle either of the dudes next to me.

I slept on the floor of a train because I was too cheap to pay $40 for a bed. I slept in the Filthiest Hostel in Rome with bunk beds likely salvaged from a WWII concentration camp. We found that place by following a tout from the train station. (What were we thinking?) The bathtub, which was used by all 60 guests at the hostel, looked more like a therapeutic mud bath than a place to get clean.

I ate margarita pizza for countless meals since it was the cheapest thing on the menu. I skipped breakfast. I walked everywhere, almost never getting in a taxi. I rode subways without paying. I traveled like a homeless person, or like a participant in a game show trying to spend as little money as possible. 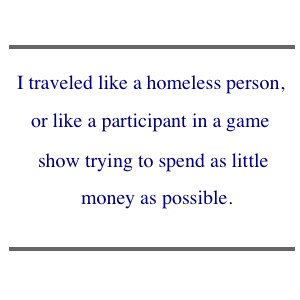 I am still a budget traveler, a backpacker, but sometimes I splurge for A/C. When researching hotels in Lonely Planet, I don’t automatically dismiss those in the “Midrange” Section.

I eat pizza with meat on it. My wife and I get private rooms – no more dorms for us! We don’t always go for the cheapest class of train. We even take a private car from one place to another when it makes sense.

We still love street food, but we are not necessarily scared off by a place with a server, a menu, a table and chairs.

In short, we have graduated to the class of backpacker known as flashpackers. It feels a little wrong.

Traveling with a high maintenance wife

A big reason my standards have changed is because my wife, Kristi, is high maintenance. She thinks hotels should provide towels. She sees no point in suffering through a 24-hour bus ride that costs $40 when you can fly there in 2 hours for $75. She thinks that food should be served from a clean kitchen and that when you eat meat, you ought to know from which species of animal it came from.

She thinks pillows should come, get this, with pillow cases.

Maybe she isn’t that high maintenance. She did, after all, drink beer from a bucket in an African slum.

She is so demanding.

With these changes, Kristi and I are no longer backpackers, but have evidently graduated to the class of “flashpackers.” We still travel like backpackers, but we have slightly larger budgets.

Whereas on my first two trips I was traveling unemployed, I now have a job to return to. We work seasonal jobs; we have quasi-careers. Some of my co-workers look at us as being grown-ups, but many people in the real world think of us as slackers. The reality is probably somewhere in between.

On the first trips I took, the end of my money was the end of the trip, so saving was critical. Now, if we go over budget a little, it’s not much of a concern.

I have to admit that I have one of the best wives/traveling companions of all time. If we were not married, I’d travel alone exclusively. There is no better way, in my opinion.

Kristi lets me make most of the itinerary. When my ideas go off the rails, like the one time I wanted to do a 5-day camel trek across southern Jordan, she allows me to have my way knowing I will come to my senses.

Me: Let’s do a 5-day camel trek across southern Jordan!

KB: Okay. Whatever you want.

Me: (thinking: that was too easy.) THIS WILL BE AN EPIC JOURNEY OF DISCOVERY!

Later after thought and research.

Me: You know, although a 5-day camel trek would be epic, but I am thinking, purely due to time restraints of course, that we ought to opt for the 4-hour camel trek at Wadi Rum.

KB: Are you sure? I know how much you’ve had your heart set on that 5-day journey.

(Later while on a Camel)

JB: Holy $%^& this camel is uncomfortable. There is no way we could be on one of these moody, grumpy, stinky beasts for 5 days. Luckily, I talked you out of that one.

A year and a half ago, we got to step back into a different life and see what it was like to be a poor backpacker staying in the dorms again. We arrived in Victoria Falls, Zimbabwe, after a long and arduous overnight bus ride from Namibia. We went to the Mousebird Hostel, a friendly and funky place with a swimming pool and pizzas on the menu. They were sold out, save two beds in a dorm. Exhausted, hungry, stinky, we decided to stay in the dorms for one night.

It was one of the worst decisions I’ve ever made.

The room had no fan, no circulation and it stayed about 95 degrees in the room all night long, even after the outside temp dropped considerably. It was like an oven in there, meaning that it truly had stagnant heat that cooked us. I got out my towel, wetted it down and laid it on me. We opened the window and every now and again a tiny hint of a breeze would drift in and give a millisecond of comfort.

Utterly exhausted, we crashed out at 9pm. Just outside our room, the cool vibe of the bar area became the scene of a huge party, with eardrum splitting, soul-rattling base pumping out of huge speakers. We heard alcohol-infused conversations all night as the bonhomie of people taking shots and singing songs echoed through our room.

Our open window offered the occasional respite of breeze, but it also allowed a continual barrage of mosquitoes to eat at us. All night I’d hear Kristi and our dorm mate slapping at mosquitoes. I was covered with bites the next day.

The only bright side was our dorm mate, a tiny, sweet Korean girl who didn’t smell, snore or take up space.

The next morning we had the following conversation.

Korean Girl: Did you sleep well?

Korean Girl: Of course not. (Said with exasperation and the perfect inflection of a native English speaker)

Unless it is an emergency, I’ll probably never stay in a dorm again. I am okay with that. But I do feel a tinge of guilt when I get the 2nd class sleeper car, knowing full well that 3rd class would be acceptable. I feel slightly snobbish when I get the $20 room with a balcony and A/C when the $11 room without such luxuries would have worked just fine. I feel the cognitive dissonance when we meet true backpackers, and they deny themselves pleasure or convenience due to their frugality or poverty.

I am thankful that I have means to travel at a slightly higher level, to enjoy more comforts. It feels a little wrong, but it also feels so right.

14 thoughts on “How I’ve Changed as a Traveler, or The Cognitive Dissonance of a Flashpacker”