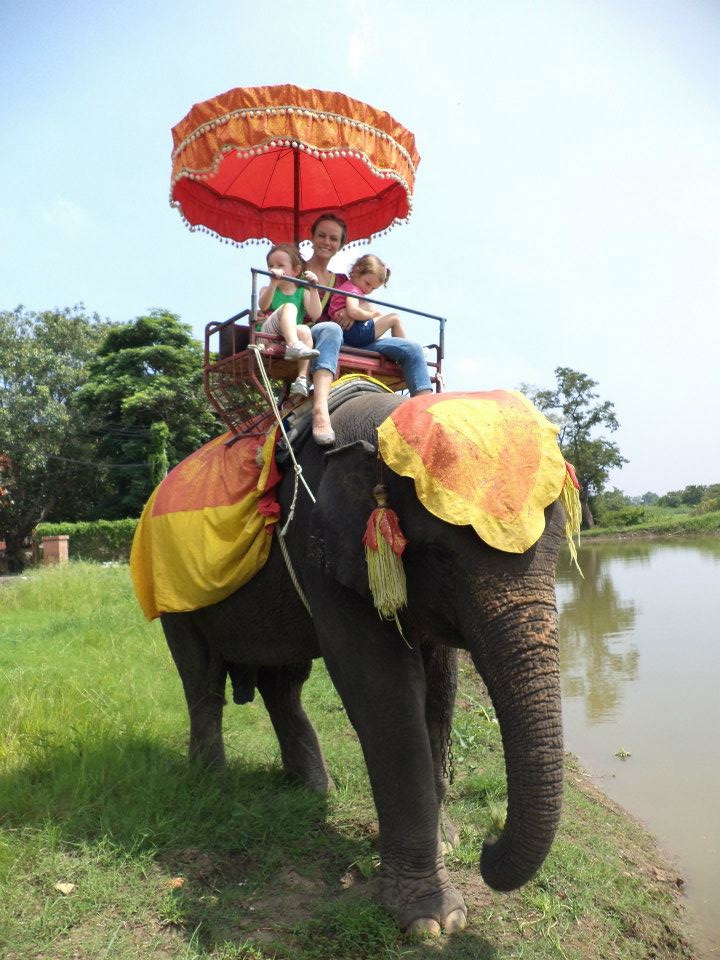 The Bruso family at the Grand Palace.

People often say that you can’t travel once you have kids.

Try telling that to Dominick and Becky Bruso.

In their short time in Southeast Asia they have had the chance to travel and experience a much different culture. They prove that it is possible to travel with kids, even though it is harder, presents different challenges and there are presumably more meltdowns at World Heritage Sites.

Kristi and I met Dominick and Becky in 2006 when they were newlyweds just like us. We worked together in Denali National Park, Alaska. Much has changed in their lives since then, but their desire to see the world never waned even as their family grew.

Below is an interview with the Brusos about their life in Thailand and the challenges and rewards of living abroad.

What are your jobs?

Becky is at home with our youngest and plays the piano a lot for the choir classes at my school. Becky also volunteers once a week and teaches a free English class to people in the community.

Why did you decide to work in Thailand? Did you consider other places?

We were off to an adventurous start as a couple when we worked in Denali National Park for a cruise line after only 6 months of marriage. It was such an amazing experience that we started talking about the possibility of teaching abroad.

I was going back to school to get my teaching certificate and didn’t see any way on an American teachers salary that I could ever afford to see the places that I was teaching about. So even before I finished with my teaching license I started looking into teaching for a Department of Defense school. The problem is that the DoD schools are very hard to get hired into and so I had a friend in my master’s program who had taught in Ethiopia at an international school. He raved about the experience and he got me hooked!!!! I spent the next 2 years trying to get into an international school career fair. Most international schools try to hire teaching couples, and as I was the only one teaching, with 3 dependents, I was not the ideal candidate for many schools.

In January of 2012, I went to a career fair in Cambridge, Mass. It was chaos: 150 schools in a large ballroom, and everyone vying for an interview. It was a lot like speed dating. You stand in line for a school that has an opening that fits what you teach and when you get to the front you have about 15 seconds to try to sell them on why you should get an interview. Then you spend the next 3 days interviewing! By the end of the weekend I came out with 6 offers. I was offered positions in Cairo (two schools), Kuala Lumpur (Malaysia), Saudi Arabia (working for a school owned by Aramco Oil), Mexico City, and Bangkok.

Our decision really came down to Mexico City and Bangkok. We chose Thailand 1) for the standard of living and 2) the culture. We felt a lot safer bringing our two young daughters to Thailand than Mexico city (a lot of violent city crime) or Cairo (this was right before the soccer riot where 72 people were killed), and the words “Saudi Arabia” just say it all. Besides, our money can go a lot farther in Thailand, where labor is cheap, and fresh fruits and vegetables are inexpensive and plentiful. Also, we had never been around large amounts of Asian culture and it was something that really seemed to speak to us. 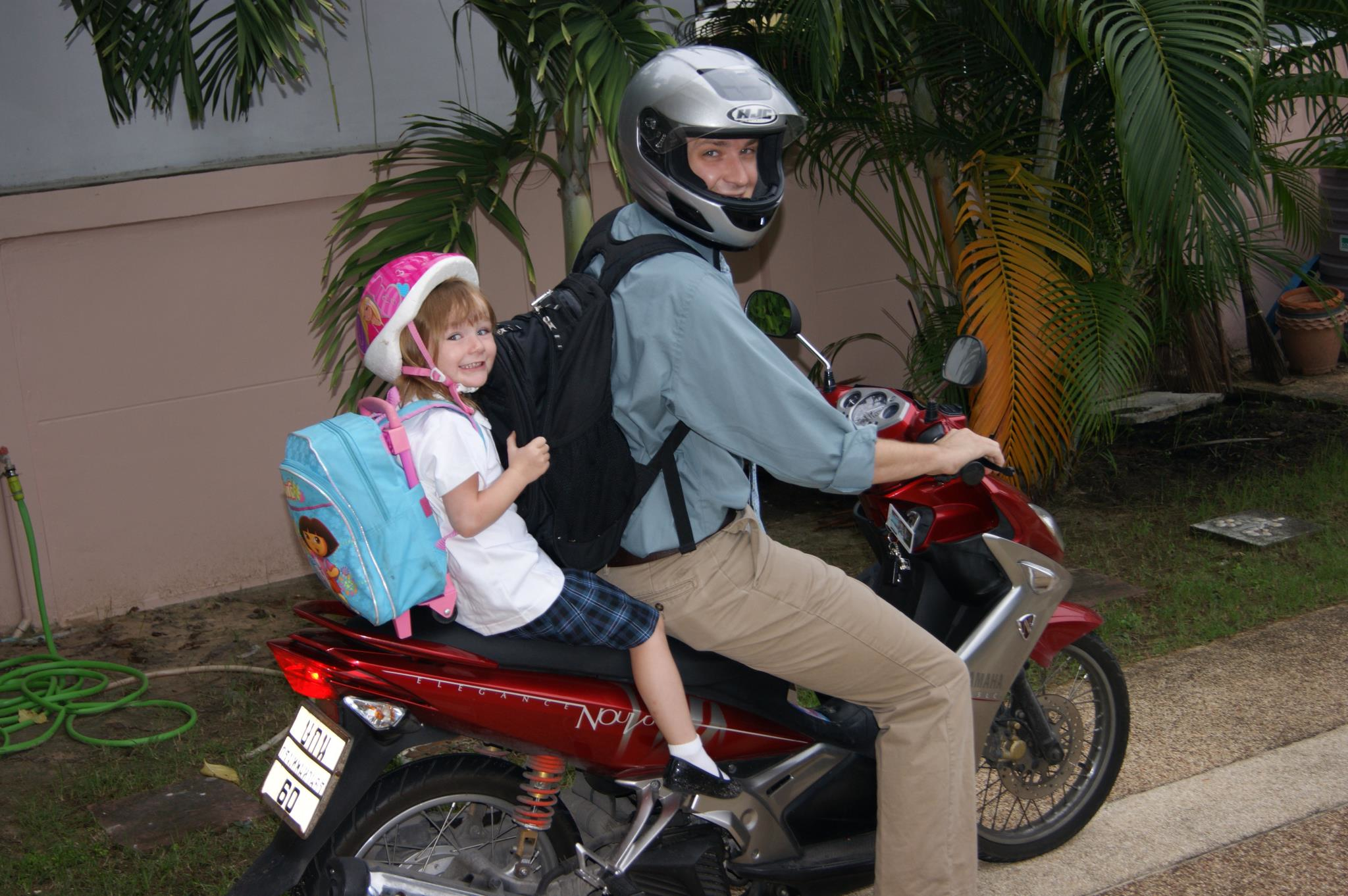 What has been the biggest adjustment to living in Thailand?

1) The Thai language is one of the most difficult in the world! They use different characters and 5 tones, and there are really no similarities to English.

For instance the word Khao (pronounced cow) can mean 5 different things depending on the tone. It can mean rice, mountain, fish, white and ‘him’! The first time I tried to go get rice and vegetables was an adventure. I said it with the wrong tone and she stared at me like I had an eye on my forehead.

2) The heat! Southeast Asia is hot!!! When we showed up at the end of July it was high 90’s with 100% humidity. It felt like 110! The humidity can be absolutely draining. I have since gotten used to being sweaty all the time.

How much stuff did you bring?

Each of us brought two checked bags and we carried on 5 bags. We brought some toys for the girls, a few food staples (taco seasoning and grated parmesan cheese) and lots of warm weather clothes. We left some things with family back home, but we sold most of what we owned and started here fresh!

What were the reactions of your kids when you told them you were moving? Your family?

Becky:  The kids were really excited. We watched a lot of Travel Channel shows and showed them a lot about Southeast Asia. Our 3-year-old watched a Samantha Brown episode where she visits an elephant sanctuary in northern Thailand, and she takes care of it for one day. All the girls could remember is that it pooped in the water, and that was the first thing they wanted to see in Thailand.

Our parents and siblings had different reactions. Dominick’s parents were perplexed and wondered why we’d ever want to move across the world. My family had lived a lot closer to us since we were married and were very sad that our daughters would be so far away.  Within the first 2 months, my sister and mother came to visit;  it was so much fun to have an adventure with them!

Yes! They love rice, chicken, veggies in oyster sauce, and are very good about trying new things. The hardest thing, however, is the amount of food that is spicy. The other difficulty is avoiding peanuts—our 4-year-old has a severe peanut allergy, and we have already been to the hospital once because of a donut with peanut butter hidden inside!

How do the locals react to your kids? Has having kids with you opened any doors with locals when traveling?

Oh, my gosh, people love our girls! Everybody tries to talk to them or touch them. Sometimes it’s a little annoying when they whistle or snap at them like dogs to try and get their attention. We also love it when in big public places people just start taking pictures of themselves with our kids. Giada endures it pretty well, but Lizzy won’t be bothered…she’s too shy and not as outgoing, so people scare her when they pull her away from us into a picture, and we don’t force her. Yes, in some ways it has helped open conversations and people give them sweets and treats, but I can’t say that we have gotten any nights in a hotel for free because are girls our so darn cute.

The first week we were in Thailand we were eating at a McDonalds. We were by a big window and a Thai woman walked up to the glass and was eating meat on a stick. The girls were not paying attention and so the lady knocked on the glass like we were animals in a zoo while she kept eating her meat on a stick. That is what we sometimes endure. We are stared at a lot especially because we are not in a touristy area of Bangkok.

Where have you been able to travel so far? Where do you plan to go in Southeast Asia?

We have just been within Thailand so far—to the touristy sites of Bangkok, to the old ruins of Ayutthaya, Siam’s old capital, and to a couple great beaches—Koh Larn and Koh Chang (Koh means Island, Chang means Elephant). We will also go north to Chang Mai and Chang Rai, south to Phi Phi and Krabi.

Outside Thailand, we hope to travel to Burma, Vietnam, Cambodia, Singapore, Hong Kong, Taipei, Sri Lanka, and anywhere else we can! Bangkok is a great travel hub in South East Asia, and it is easy to get to nearby countries. The airlines are amazing, as well, some of the best rated in the world!

Becky and the girls riding an elephant at Ayutthaya National Park, Thailand.

What are some of the most noticeable cultural differences?

What are your plans after this? Do you plan to work somewhere else abroad or return to the USA?

Not sure yet. We miss our families, but thanks to Skype and MagicJack, we can talk to them every day if we want to! Something tells us that when we get close to our 2-year mark, we won’t be ready to go home yet! We just hosted some friends of friends who came from an International School in Uruguay. After talking to them about life there, maybe we’ll head to South America next!

What advice would you give to anyone who is thinking about doing the same thing?

Give it a try! It can be nerve-racking and hard to turn your world upside down, but it is an amazing experience and opens your eyes to the world. You will see how good you’ve had it all your life. You will see how so many people can be happy with nothing. You will be more grateful for your family. You will find something that makes you want to change the world.

(footnote) Dominick coached our softball team in Alaska. Even though he is a giant Mets fan, I can assure you those kids in Asia have a good coach.