I SURVIVED! It took a lot of self-medication (booze) and deep breathing exercises, but I survived my family Disney Cruise vacation and kept my sanity. At least I think I did. Perhaps I will start to show signs of PTSD or start having nightmares about children and Disney characters. Time will tell.

Despite my fears, I have to admit that I enjoyed the cruise. But everything I that I loved, I also simultaneously hated.

Let me take this time to explain my love/hate relationship of cruising.

I love and hate the food

The food on the Disney cruise ship was absolutely phenomenal.

Each evening all thirteen of us dined in one of the opulent dining rooms. The food was perfectly prepared, creative, fresh and presented beautifully. We all ate an appetizer or two, a main course and a decedant dessert. It was an event that took over two hours each night and I assume I took in at least 2000 calories for each dinner.

For breakfast and lunch we dined at the buffet which was just as good as the dining room as far as quality. One day at the lunch buffet, I got a reasonable helping of the creamiest macaroni and cheese in the history of the world, a cajun-spiced fillet of Mahi Mahi and five shrimps with cocktail sauce. Total calories: about 700. Not too bad, right?

I went back to the buffet and got exactly the same thing – a duplicate plate of mac & cheese, fish and shrimp. Total calories for both helpings: 1400. Then I got a cookie for another 150 calories. And then a bowl of pineapples for 150 calories. So my total lunch was a delicious 1700 calories, but I’d have been sated at less than half that.

According to some articles I’ve read, the average cruise passenger gains one pound per day.

Let’s look at this in detail.

The people on our cruise ship, in theory, packed on 8000 pounds! That is 4 tons of fat! That is disgusting.

The woman at the bar actually weighed 105 lbs before the cruise.

At this moment, I am suffering residual fat gain effects as I am having a difficult time adjusting to a normal amount of food. After having my tastebuds bombarded with flavor and after having so many sweet deserts, I am craving cheese, meat, carbs, fat, and sugar. I NEED SUGAR!

Seriously, somebody get me a #$^%ing candy bar!

In eight weeks in India, I lost eight pounds. I ate mostly vegetarian meals of hearty curries made from fresh, organic vegetables and fiber-filled whole wheat bread. I ate some rice, some fruit and some deep-fried snacks like samosas. I drank beer here and there. I still lost a pound a week.

Over that time, I saw my belly slowly shrink. In the four days on the boat, I saw my belly rapidly expand. I am afraid to step on a scale as it would be shocking, embarrassing. All that gradual weight loss is out the window.

I Love and Hate The Kids on a Disney Cruise

The Kids area on the Disney Dream. This photo does not illustrate the chaos during the daytime

Kids were the greatest source of my pre-trip trepidation, but I never really felt like I was on a Disney Cruise. There were a number of adult only areas, which made it easy to escape the urchins. Moreover, I realized that the real draw for parents to a Disney cruise is that there are so many activities for the kids, that the kids can run off and play and the parents can relax away from them. Brilliant.

There were two pools areas on the top deck – one for kids, the other for adults. The adult only pool featured a swim up bar and was usually empty. There was an adjacent coffee shop and an 18+ hot tub. This is where I lived. It was gloriously kid free.

Whenever I went to get a drink from the beverage station I walked past a partition that separated my serene adult area from the anarchy of the kid zone. It had a mad, end-of-times feel to it as kids ran around like savages, jumping into pools, screaming and shouting. The hot tub was always filled with about 40 kids bobbing up and down like vegetables in a stew.

As I’d quickly make my way to the drink station and back, I’d pick up bits of conversation, which usually consisted of crying children and parents admonishing them or kids shrilly yelling at one of their friends. Or kids just screaming for no reason. It was an assault on my senses worse than anything I experienced in the crowded cities of India.

At the Artists Palate Dining room, animated characters interacted with the diners. This was cool, even for a big kid like me.

The kids could be avoided in most areas of the ship but not at the buffet where they drove me crazy. Actually, so did the adults. If one didn’t know better, they might assume the boat was lost at sea and that we were about to disembark on a deserted island and that everyone had been instructed to eat as much as possible for it was the last time we’d get fed in an unknown amount of time.

The tourists drooled, snarled, and packed into lines to heap mounds of food on their plates. The kids were left unattended and ran around bouncing off passengers who were trying to balance multiple plates of food in their hands. Armies of cooks raced around with industrial sized containers of food replenishing the buffet as soon as it was decimated.

So, in the end, the kids drove me crazy at times, but I got to hang out and perhaps bond a little with my 9-year-old, 12-year-old and 14-year-old nieces. The 12-year-old even gave me a hug. I think that was a first.

I am very upset with Disney right now. The service on the boat was so absurdly excellent and consistent that it has ruined me in the real world. Also, I work at a hotel and I feel an inferiority complex as I don’t think we could ever achieve their standards of excellence. Thanks a lot, Disney.

Back on dry land I went to the movie theater. The employees at the snack bar were having a conversation and didn’t stop to take my order until they were ready! The hotel staff didn’t flash me a genuine smile when they saw me! We asked an employee at Wal-Mart a question and she told us to go look ourselves! 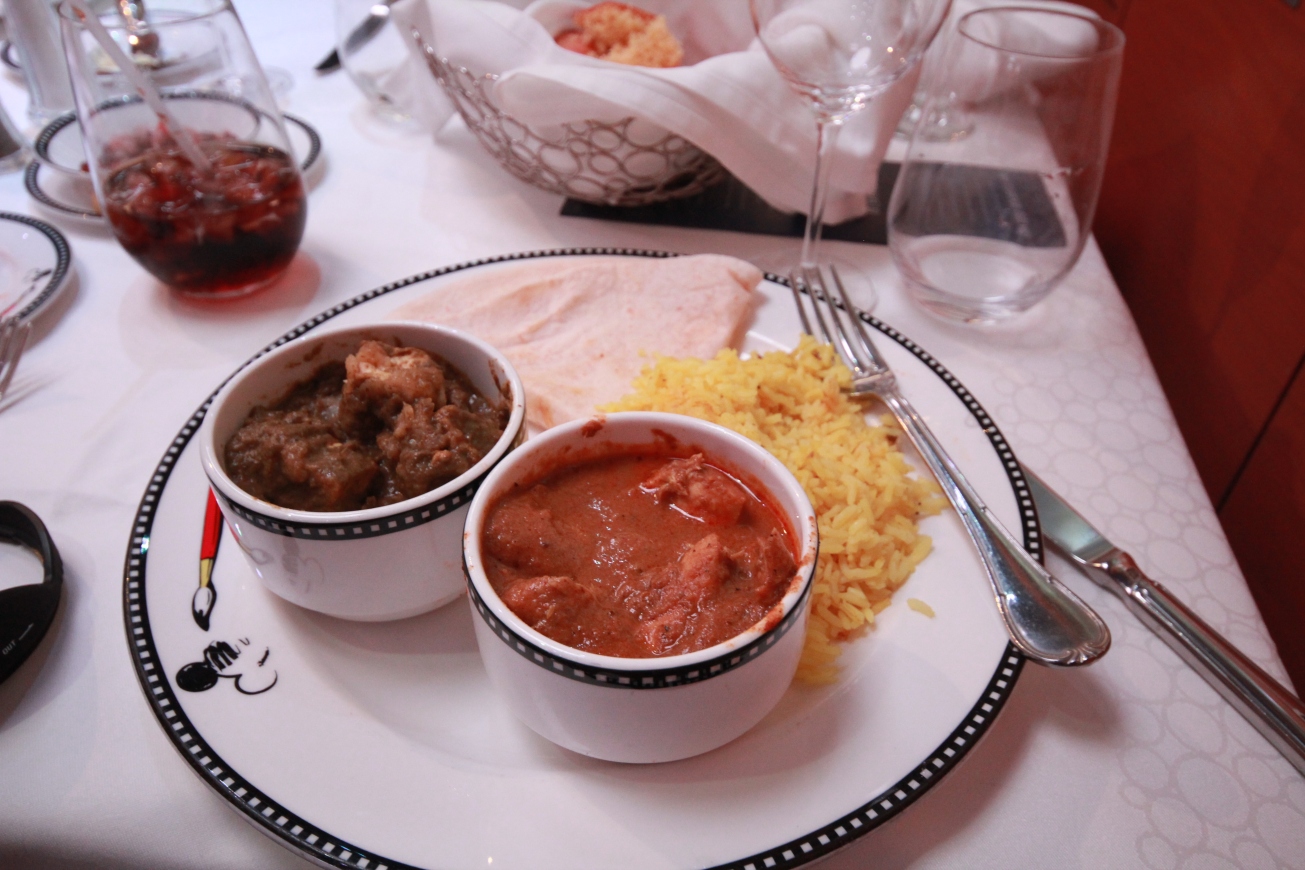 The restaurant manager was from India. We told him we’d recently visited and loved the food, so they specially prepared Indian food for us. That is excellent service.

I enjoyed the crusie, but cruising really isn’t for me. I belong in a dirty 3rd-world country, wearing an overstuffed backpack, eating something that is likely to make me sick, arguing with a tuk-tuk driver about a fare. But, if I were to go on a cruise again, say with just my wife, I’d pick Disney over any other cruise line. The service, food, ship and entertainment, I believe, are second to none.

The best part of cruising for me is that I can wear outfits like this and not stand out as looking ridiculous:

Those shorts are money.

Have you been on a Disney Cruise? Do you like cruising?

12 thoughts on “3 Things I Love and Hate about Cruises, or I Survived Disney with the In-Laws”