Yesterday was the culmination of 10 days of Indian festival, as the 9-day Navrati festival gave way to one big blow-out called Dussehra.

We watched the festival in Jodhpur, where a parade started in the afternoon at the gates of the imposing Meherangahr Fort and flowed as a river of noise and chaos down the narrow, twisting alleyways of the old city  to the broad, dirty and ugly streets of the new city. The parade ended at a dilapidated cricket stadium with a dirt pitch – part of which seemed to double as a trash dump – where the effigies of the demon Ravana and four of his sidekicks were burned amidst a storm of fireworks.

The parade in the colorful old city streets consisted of groups of 20-40 men who would pause at the intersections and fight with sticks, dance, play music, beat drums and perform tests of strength, like riding a motorcycle over a dude laying on a bed of nails. 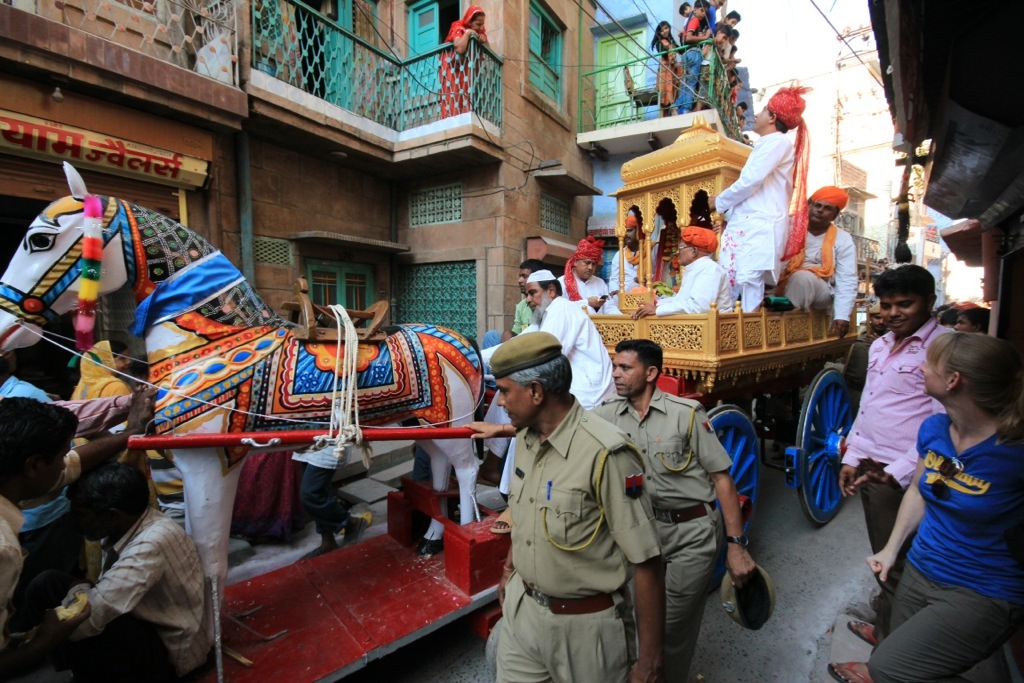 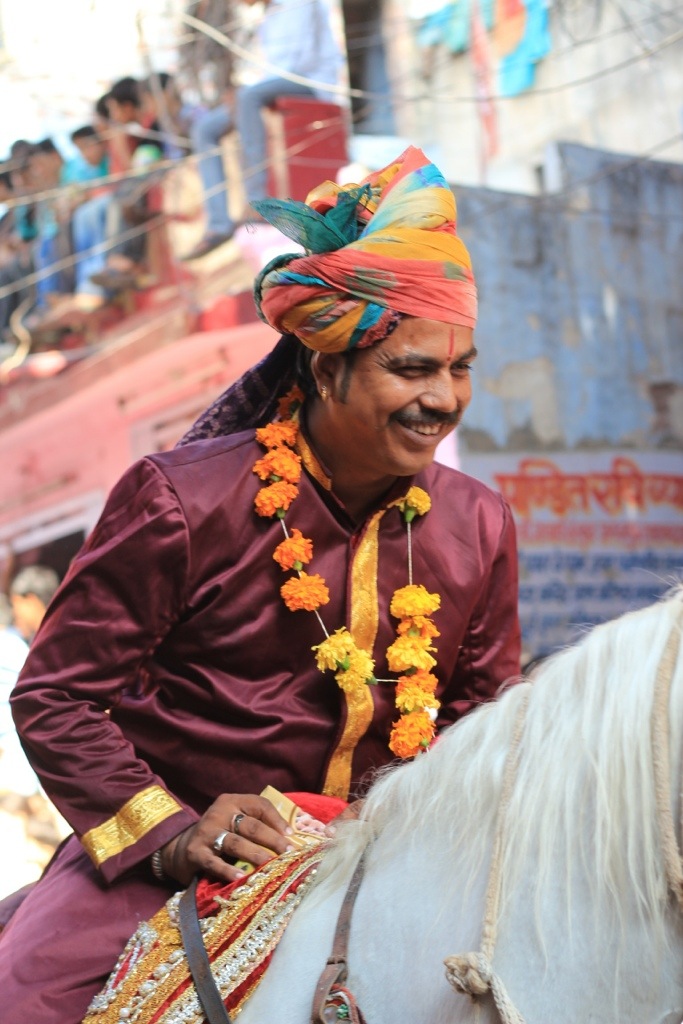 People gathered on the streets, perched on balconies and rooftops and hung from windows to watch the raucous parade below. The friendly locals would invite us to sit with them or see me with my camera and put me in position to get the best photos. People in the parade would often pose for photos and sometimes stop to talk to us. One time this earned them the ire of their group leader who screamed at them and whacked at them with a stick like they were disobedient mules.

We Need to Burn Demons in Effigy

At the stadium, the fireworks and idol burning started at dusk in an atmospheric setting of soft orange natural light, bright floodlights, explosions, emotion and shouting. The demons were incinerated in a storm of fireworks and the crowd cheered the way one might at a public beheading. As soon as the demon burning was over, the females and families made for the exit of the stadium while the men and boys converged towards the stage where there were fire-breathers, fire-dancers and fireworks.

Indian men stood a few feet away from exploding rockets. These were not small fireworks; they were legit 4th of July celebration rockets exploding in the sky. You could see the smoldering canisters fly into the crowd. It was, to say the least, dangerous. I kept waiting to see a burning Indian man run through the crowd screaming in agony like he’d been set alight by Rory Breaker.

Where you have fire and explosions you have men and boys. Where you have fire, men and boys you have adrenaline and testosterone. Kristi and I were the only westerners we saw at the festival and she was the only girl near the fires and the stares and attention she was getting made her uncomfortable so we decided to leave a little before I was ready. (Hey, I’m a boy and I like fire!)

The streets were packed (more than usual) with Indians as blaring music, honking horns, smells of fried food, dust, and chatter from a billion voices swirled in the air. When we got back home we enjoyed silence and calm, a treasure. My head ached like I’d been chained to the speakers at a Limp Bizkit concert and I was dirty and smelly like I’d been a participant in a rodeo.

After seeing the fire show at the cricket stadium it made me realize that in America we need to burn more stuff in effigy. On Independence Day, not only do we need to blast fireworks but we also need to burn a giant statue of King George III, a model Big Ben and the Tower Bridge. Maybe on Valentine’s Day a new tradition of burning giant candy hearts can be started by those without dates; maybe burn effigies of Romans and Satan on Easter. In short, we need more explosions in our culture.

RELATED: Indian Festivals are Awesome, or I am the World’s Worst Dancer

7 thoughts on “Indian Festivals are Awesome Part II, or We Need to Burn More Stuff in Effigy”