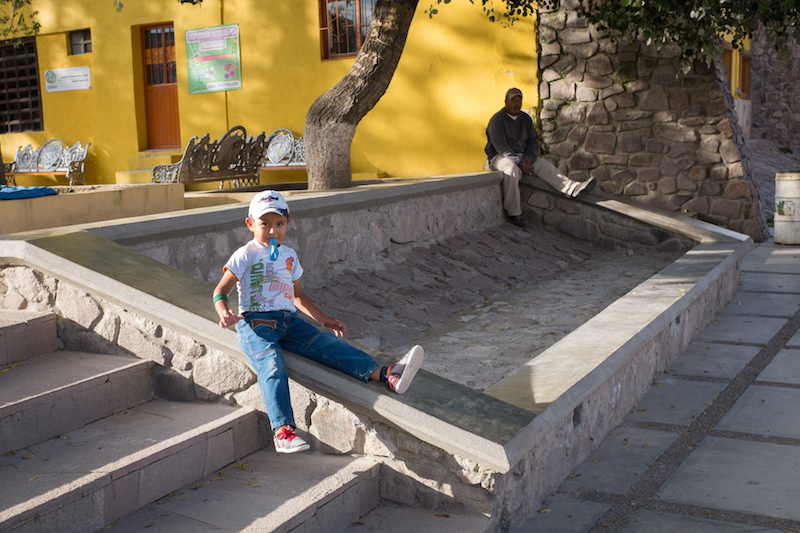 The mean streets of Chihuahua

This is the big question people have before making a trip to Mexico, or for nervous relatives who have a family member taking a trip south of the border.

With all the violence reported in the media, it would be easy to assume that this massive country – which is bigger than Germany, France, Italy, Spain and Great Brittian combined – is a perilous place to live or travel, but a closer look reveals a more complicated situation. I could recite stats on Mexican murder rates or crime, but that is available all over the internet. Instead, I am going to share my personal observations and experiences from the first two weeks in Mexico.

Is Mexico Safe for Tourists? – My Personal Experience

The U.S. government has travel advisories for only a few states, one of those being Chihuahua. Naturally, we started our trip in Chihuahua.

The Chihuahua city center seemed very safe. Well after dark, we saw women and children walking in the streets, couples canoodling in parks, people working out in gyms, plenty of traffic on the road – all signs of a secure city. At 11pm on our first night, we walked several miles from a restaurant, across the central squares, to our hotel about 1/2 mile south of the Plaza de Armas. We didn’t feel the least bit concerned, as we saw other pedestrians out and about.

We saw only a moderate amount of security around buildings. In southern Africa and Central America, for example, almost every fence is topped with a skein of razor wire, barbed wire, and electrical wire,  just waiting to entangle and electrocute any would be intruders. In addition, most windows are secured by iron bars and decorated with an ADT security sticker. Many office buildings and apartments even have an armed guard out front. This is a sign of a truly dangerous place.

Although we did see some razor wire and some bars on windows, overall it wasn’t the norm in the center, and we saw very few security guards.

We then spent four days in Creel in the Sierra Madre – a region known for its marijuana and poppy production and narcotrafficking routes. We explored the area by riding mountain bikes in the countryside and hiking in a national park. Many places I’ve been, this would have been a certain way to get mugged. We saw families enjoying the countryside and everything felt very safe, although it is wise to stick to the beaten path in the area.

The mean streets of Creel

In Creel, I spoke to a local who said that there are no small gangs in Chihuahua. You don’t so much have to worry about street crime because the gangs are focused on the big money business of drug trafficking. He said it is strange, because the people of the area are very friendly and peaceful, but are juxtaposed with gangs that can unleash extreme violence.

During our week in one of Mexico’s most dangerous states, we felt very safe and had a great experience.

We next visited El Fuerte, a colonial town in the state of Sinaloa. You may know of Sinaloa because the infamous cartel boss and one of the world’s most wanted men, Joaquin “El Chapo” Guzman, is head of the Sinaloa cartel crime syndicate.

El Fuerte is one of the most relaxed, tranquil and peaceful places I’ve ever been. After dark, we saw kids playing in the park, couples strolling around, lone women in the streets, people enjoying sidewalk cafes. They all seemed totally unconcerned with street crime, and we saw minimal security around. El Fuerte is no doubt very safe for tourists.

Next, we went La Paz, a city of 250,000 people on the Baja Peninsula. La Paz, meaning peace in Spanish, lives up to its name. The malecon, or seaside walkway, is busy with kids, skateboarders, joggers, families, and tourists at night. We drove our rental car around the less touristy places in town and around the countryside and everything seemed very safe and secure.

We met an American in La Paz who was very surprised to hear that we traveled through Chihuahua and Sinaloa. “I bet you kept your head down through Sinaloa,” he said. He went on to say that he had a Mexican co-worker who said a white person should never visit Chihuahua. My three traveling companions and I were stunned into silence. We never felt the least bit of danger or concern on the mainland.

The mean streets of El Fuerte

Signs that things aren’t quite right

However, we have seen things that drive home the point that this area isn’t totally secure and Mexico is at war with the cartels. We have seen camouflaged pick-up trucks with army soldiers in the back, all armed with machine guns, cruising the streets of Creel and La Paz, and we’ve encountered state police roadblocks with cops armed to the teeth.

While riding our bikes in Creel, we came up to a house with three cop cars and five men outside with big machine guns. They motioned for us to go the other way. We obliged.

The Copper Canyon train had a very friendly man, with a very big gun, on board for security. The ferry from the mainland to Baja included some intense security. Drug dogs sniffed all our bags and guards waved a metal detector wand over our bodies. The security was more strict than boarding an airplane in the USA.

And of course, the big item in the news right now is the manhunt for “El Chapo” and the recent shootout in Sinaloa, which took place about 275 miles south of El Fuerte.

I think the lesson, from what we have seen, is clear: if you travel during the day, are careful where you go at night and use basic caution, Mexico is quite safe. If you want to become a drug mule or buy marijuana for export, Mexico can be fatal.

Having said all that, clearly one of the most dangerous things in this country is riding in a car. In fact, the national homicide rate of 12 per 100,000, is identical to the death by car accident rate. Trust me, I am far more likely do die in a car with one of these loco drivers than at the hands of a narcotraficante or street mugger.

The mean streets of La Paz

Have you been to Mexico?

Did you feel safe?