“You know son, since 9-11 they don’t let you carry weapons on airplanes anymore.” My dad said this to me in January of 2003, the night before I was to depart to Guatemala. Hitherto this moment, he hadn’t asked about my trip.

“As soon as you get off the plane, you are going to need a gun or knife for protection. It is rough country down there.”

This led to a small argument and some awkward moments at the bon voyage dinner we were having at a Chinese restaurant. Back home, I spread out my giant map of Mexico on the kitchen table. I had booked two weeks of Spanish language instruction in Antigua, Guatemala, and aside from that, didn’t have a real plan; however, I had fantasies of travelling overland from Guatemala back to Oklahoma by bus through Mexico. I had a one-way ticket to Guatemala, I was unemployed, I had a year’s worth of savings in my bank account, I was single and about to be at large in the world. It was a feeling of unimaginable freedom, something I’ve never had since, and will never have again.

“Do you even know where Antigua is?” my dad asked. “Tom Gilliland from work says that Antigua is an island! And Joe from work is from Mexico. He said they don’t even speak Spanish in Guatemala!” 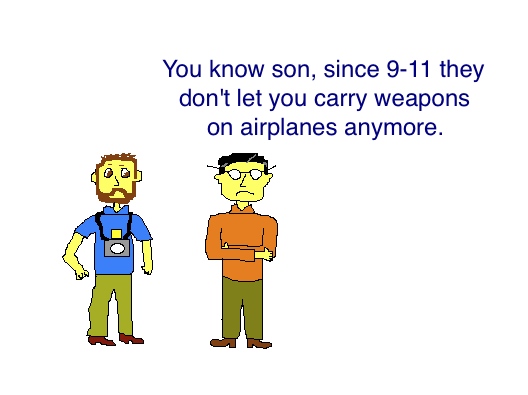 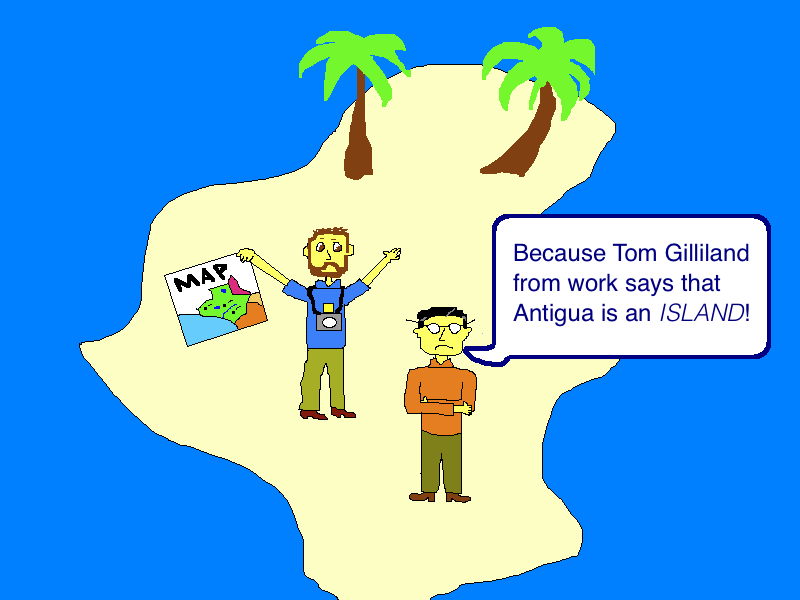 As I showed my dad the map, my mother was in the front room. “Come look at this,” my dad implored her. “I don’t want to,” she argued.

“Just come look at it to see where he is going!”

It was as if not seeing my map and plans made it not real. That way, she wouldn’t have to face the fact that her son was going to the lawless land south of the border.

“I guess if you disappear, I’ll get Joe and come down there looking for you,” my Dad said gravely, after he realized I wasn’t going to be talked out of leaving.

Traveling Across Mexico By Bus

Cinco de Mayo, Oaxaca. I spent the entire day looking for 2-for-1 tequila shots, Tex-Mex cuisine and endless bowls of chips and salsa, but alas, the Mexicans have no idea how to celebrate Cinco de Mayo.

On that trip, I lived spontaneously with very little planning. Basically, I did whatever I wanted and it was unexplainably awesome. I ended up studying Spanish for 10 weeks in Guatemala, went to Cuba on a whim and traveled around Honduras. In the end, I still wanted to travel home by bus. Armed with passable Spanish and no gun, I traveled to Tapachula on the Guatemala/Mexico border, one of the great hellholes of the world.

From there, I traveled 2200 miles by bus across Mexico. Here are the highlights. 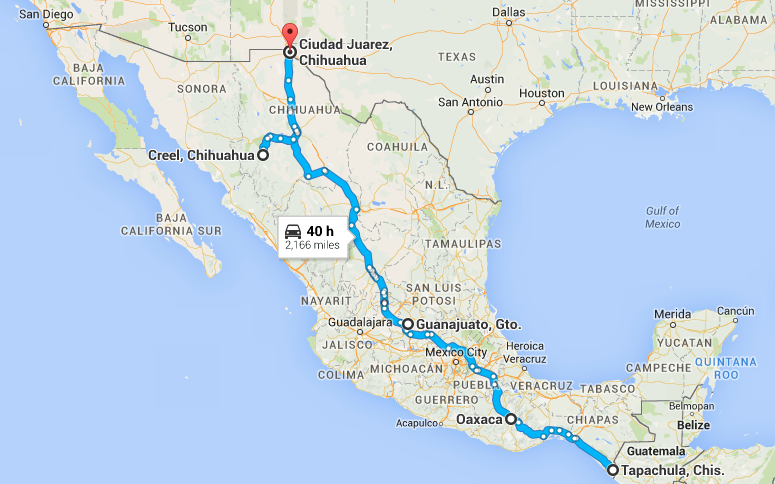 As you can see, I didn’t exactly have a great time in Mexico. After four life-changing months in Central America and Cuba, I was lonely for the first time, sick, tired and ready to be home. However, I feel a certain amount of pretentiousness when it comes to Mexico. I know tons of Americans who have been to Cabo or Cancun, Mazatlan or Puerta Vallarta. While they were enjoying cheap drinks on world-class beaches, I was having a true adventure traveling across the real Mexico. It doesn’t matter that they actually enjoyed their trip and I was lonely and miserable. I merely tell them that I’ve traveled the entire country by bus and this makes me a bad ass. 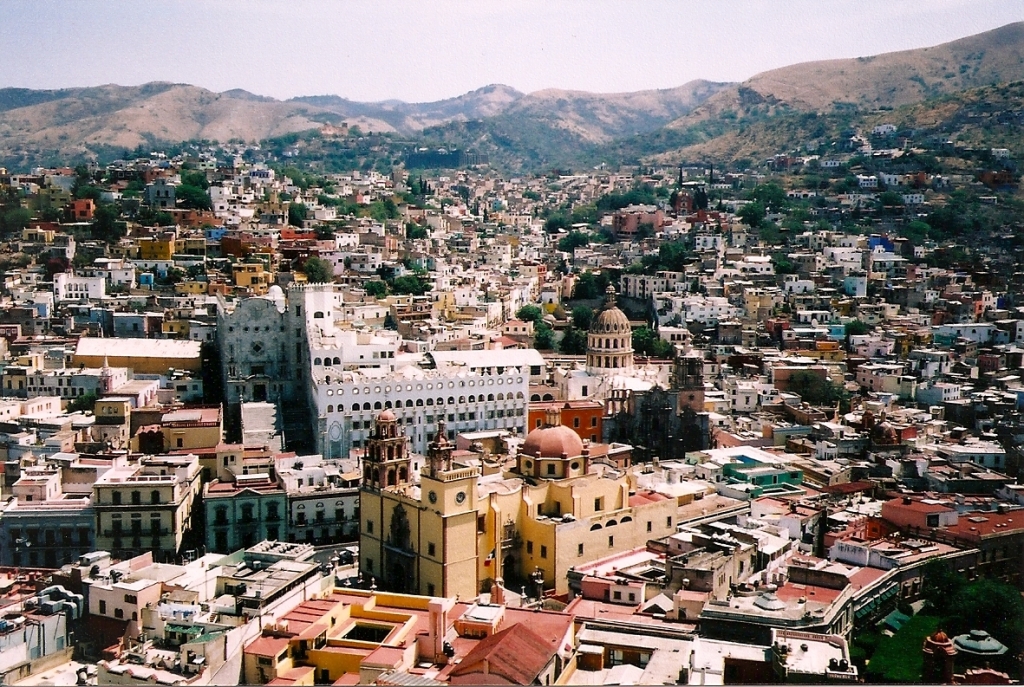 Guanajuato – a lovely place to get amoebic dysentery.

Last week, I booked tickets to Mexico. On October 7, we have a one-way ticket to Chihuahua, which is a mere three hours of flight time from Oklahoma City. On December 17, we fly home from Cancun, another short travel day. I got both tickets using airline miles, paying a total of $161 in taxes/fees. After flying to Johannesburg, Delhi, Istanbul and Jakarta on our last four trips, this one will be shorter and much cheaper, even if Cancun evokes less exotic mystery than the other locations.

We are flying to Chihuahua in order to explore the Copper Canyon and take the famous train that passes atop the world’s deepest canyon. From the end of the railway line, it is a six-hour ferry ride to La Paz and the stunning islands and beaches of the Baja Peninsula. After a week of hiking and exploring the canyons, some rest will be in order.

From there, we will scale pyramids and explore colonial cities, swim in cenotes and hike in jungles, get mugged in dark alleys and see the infamous Day of the Dead celebrations. Mexico is an amazingly diverse country and it is a shame that so many people only know it for drug trafficking, beach resorts and two-for-one margaritas on Cinco de Mayo.

Hopefully, if my camera doesn’t get stolen, or I don’t get stolen, I will have a collection of photos from some of the less touristy places that will show my dozens of readers a different side to this amazing country. Stay tuned.

Tentative Travel Plan, or Plan of the Day

Does anyone have Mexico travel tips for me?

Know of any off-the-beaten-path destinations?

33 thoughts on “We are going to MEXICO! or Righting a Past Travel Wrong”