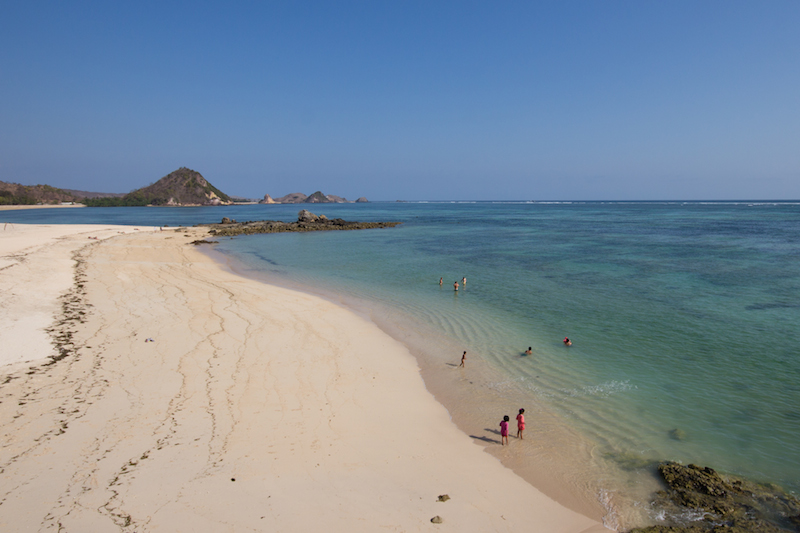 The beautiful and mostly empty main beach at Kuta, Lombok.

“I’m embarrassed to be here. This is horrible,” I said as we were walking amongst the chock-a-block restaurants, massage parlors, bule bars, Circle Ks, T-shirt stalls, surf shops, travel agents, and hotels in Kuta, Bali. Kuta is packed with the highest density of tourist crap I’d ever seen before. It was every bit as terrible as expected.

We never intended to go to Kuta, Bali, but ended up staying two days due to some logistical issues. Lonely Planet described it as “loud, frenetic, and brash,” yet this is the number one hotspot for tourists in Bali. In a sick sort of way, I wanted to see it just to see how bad it was and why people spend their hard earned money and precious vacation time in a place packed so tight with tourists.

The first afternoon I was miserable. After walking around the town in the claustral heat, we went to the beach but found it to be rather uninviting. Locals crowded into the shade, a few hard-core sunbathers were tanning in the blazing sun, and a handful of people were learning to surf on the languid waves. We retreated to the safety of the air-conditioned mall.

Then at sunset, everything changed.

Kuta beach on Bali buzzes with activity at sunset.

We decided to watch a sunset at the beach, and we were amazed at what we saw. For miles in each direction were hundreds of people, probably half of them locals, playing games, drinking beer, jogging, shooting photos, strolling with the family, or just relaxing and enjoying the sunset while their kids frolicked around. It was totally unexpected.

Jaded, I had left my camera at home – I didn’t think there would be anything worth photographing. The sun slipped below the wiry clouds, and we were treated to a glorious +2 sunset. I lamented not having my camera.

We noticed a high density of locals on one end of the beach and decided to see what was going on. Turns out, this section of the beach was near the car park and bus stop and was thus convenient for the locals. We were mobbed by a bunch of teenage girls wanting photos with the bule. I had sweaty teenage girls draped on my arms in different permutations so they could all get a photo with their camera. I didn’t expect this at touristy Kuta.

Then we went to a place called Eat and Eat. It is a collection, albeit in a Disney-esque sort of way, of little food stalls from around Asia. We walked around three times trying to decide what to eat, before settling on dumplings from China, curry from India, fried shrimp from Korea and the spiciest fish of all time from northern Sulawesi. It was delicious and fun.

Suddenly, my mood was restored. Give me a magnificent sunset, sweaty teenage girls, spicy food, and I’m happy.

Even though my mood improved and I enjoyed my two days in Kuta, Bali, I couldn’t help but wonder why so many people flock to this Paradise Lost. Yes, it is convenient, a mere 20 minutes from the international airport, which has great connections. There are a wide variety of accommodations and restaurants. And yes, the beach was great – a long, wide, soft arc of sand that extended for miles. It wasn’t the most beautiful beach, sort of plain without any rocky headlands to break it up, but great for families and sunbathers and surfers when the waves are right.

However, Kuta, Bali, absolutely isn’t for me. Techno music bleated out of countless bars, half of Australia was walking around in singlets sporting pink sunburns, and every block had a Circle K, Indomaret or Mini Mart. Often, there were two Circle K’s across or down the street from each other. Like a sailor afraid to lose sight of the sea, a tourist would never have to worry about losing sight of a convenient store on a walk through Kuta. Also, there was a wall separating a busy street from the beach. There were no beachfront bars or restaurants, making the whole town feel like a downtown metro area and less of a tropical paradise. To me, the Bali version of Kuta sums up everything that is wrong with tourism.

We got on an airplane in Bali and flew for 25 minutes to the neighboring island of Lombok to a town also named Kuta. However, the Lombok version is much different. First, the Lombok airport is new and doesn’t have many international connections. Yet. But there are flights for as little as $25 for the 20-minute trip from Bali, so it is very accessible.

Lombok’s undeveloped beach is broken up by rocky peninsulas, which create many secret beaches, tide pools, coves, and mangroves. It is a breathtaking, photogenic, tropical paradise. I imagine this is similar to what Bali was 20 years ago.

Watching surfers battle the waves is a great way to spend the day in Kuta, Lombok.

And yet, you can see the tides of change coming. I doubt Kuta Lombok ever becomes Kuta Bali, but it will get developed shortly. Tourists seeking un-crowded surf lineups, pristine beaches, peace, and quiet away from the dance music, will begin coming here in more significant numbers. Hopefully, tourism can be done tastefully and fit in with the local character of the place. Kuta Lombok doesn’t need foreign owned, multi-story hotels, a wall to separate the beach from town, blaring dance music, and a million Circle Ks. Hopefully, it can retain its character as it grows and expands. In short, I hope I can return there someday and still like it.

One more time in Kuta, Bali

We ended up staying one more night in Kuta, Bali, later in the trip to catch a flight. That night at sunset, I yet again foolishly left my camera. On the beach was a 30-person procession, with dancing girls dressed in colorful clothes and men banging drums. It was the sort of spontaneous, beautiful parade I thought I’d see in Ubud but never did. I never expected it to occur on Kuta beach. As the dancers and drummers marched by in front of the setting sun, a 12-man drum circle started a short distance away. It consisted of eight men with bongos and four men with upright drums. They played song after song and drew a rather sizable audience. They were not expecting to get paid – they were simply pounding their drums for the sheer joy of doing so.

Then an assortment of fire dancers came out, swirling around to the beat of the hypnotically powerful drums, one of the most photogenic scenes I’d ever witnessed.

I sat there in awe, transfixed by the dancing, the drums, the sunset, and the convivial atmosphere. Kuta Bali had won. It cast a spell on me. 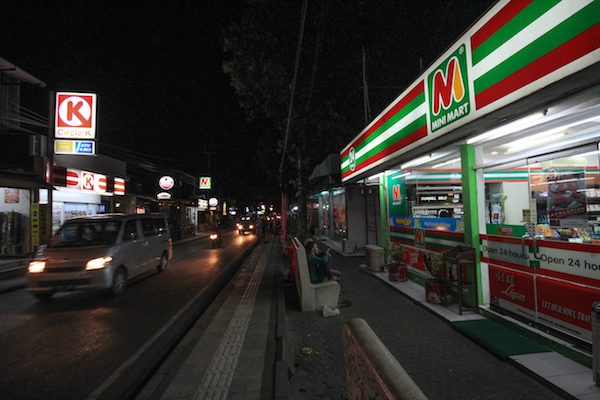 This photo sums up the town of Kuta – a mini-mart across the street from another mini-mart and Circle K. It is on the street with countless tourist shops.

Sunset at Kuta Beach in Lombok.

Have you been to either of the Kutas?

Which one do you think you’d prefer?