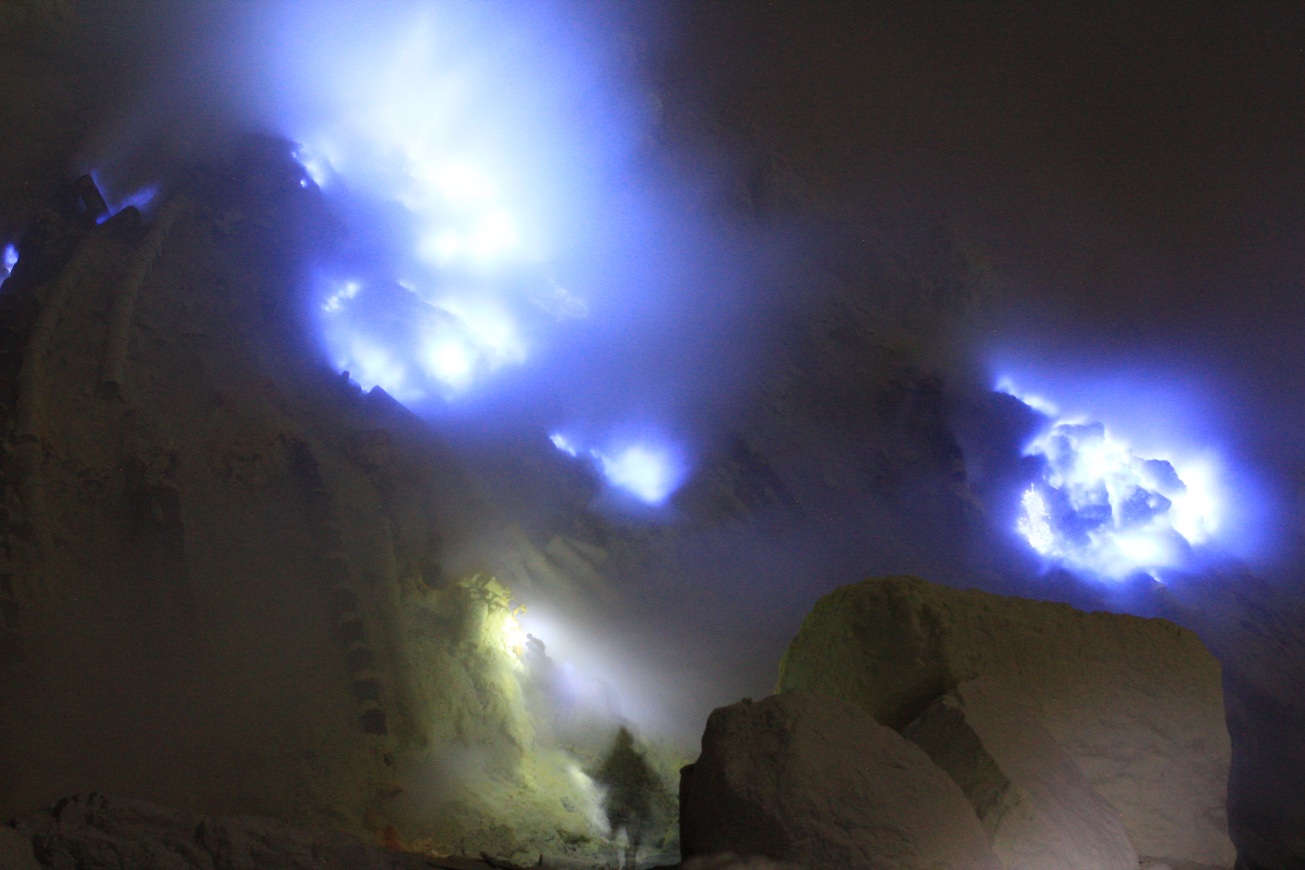 The Ijen Volcano in eastern Java is famous for many things: burning sulfur that emits blue flames at night, a turquoise crater lake, and the tough-as-nails miners who chisel out the sulfur and haul it down the mountain. I had to see it for myself.

After waking up at 1am and driving through the dark to the trailhead, we started a steep and steady ascent up the active volcano. As if hiking in the dark wasn’t eerie enough, we hiked through a brushfire and gale force winds to get to the summit. If the wind were not blowing so hard, I could have taken some dramatic photos of burning trees and flying embers in the night sky. Frequent gusts of wind blasted us with ash, dirt, and burning embers, forcing us to stop, close our eyes and cover our faces until the gusts subsided. It was a miserable slog and I questioned my sanity a couple of times on the trek.

After reaching the crater rim, we debated climbing down to the blue flames when a sign emphatically warned all visitors against it. We noticed that all the tourists with guides were going down, so we followed. The uneven trail was hard to find in the dark. It was hard enough to do in sturdy shoes while carrying a light backpack; I can’t imagine doing it with a load equal to my body weight.

And that is exactly what the badass miners of Ijen were doing.

Our rather strange idea of a vacation activity is a way of life for the DIY miners who chisel off chunks of sulfur mere meters from the burning flames and haul the rock first up the crater on a rocky goat path, then down the mountain in two baskets suspended across their backs by a bamboo pole. The weight of the load, between 60-80 kg, or 135-175 pounds, is heavier than most of the miners.

These guys are beasts. Most of them were working in flimsy rubber boots and wore only a scarf to protect their faces from the caustic fumes, although some did have respirators. A miner let me carry his load. He rested it on two rocks so that I could get under it, kind of like a squat rack at the gym. It was at a little bit of an awkward angle, but still, it took all my strength to get the basket/pole onto my shoulders and up in a position to walk. I have strong legs (from hiking in Alaska and carrying around 25 extra pounds of body fat) but carrying it out of the crater and then down the mountain, well, that would have been impossible.

“You are strong!” I said as I grabbed the arm of the willowy miner. His arm was half the size of mine but 10 times stronger somehow.

When we first made our way down to the blue flames, the wind changed and a toxic cloud blew into our faces, sending the tourists scrambling up the hill. The sulfur assaulted my tastebuds and scalded my nose. I was coughing and gagging. It was the taste and smell of hell.

“Have you ever been tear gassed?” asked a Dutch guy who has worked in Pakistan, Cairo, Bangladesh and east Africa, you know, places where tear gas gets used with some frequency on crowds.

“Well, it is a lot like that, maybe a little worse,” he informed me.

Back at the crater rim, we watched the most surrealistically beautiful sunrise I’ve ever seen, with a pink sky, the turquoise crater lake, flaming bright yellow sulfur emitting the toxic smoke, and multicolored rocks in the crater rim changing colors with the emerging light. I also saw something else mind-blowing: Kristi was nearly black with dirt.

“YOU ARE FILTHY!” I exclaimed. All of us hikers were dirty, come to find out. My ear had enough fertile volcanic soil in it to start a rice plantation; my face was so dark I looked like a different race. Back at the parking lot, hikers took turns washing their faces and hands. I accidentally scratched my head and discovered dirt and ash packed in my hair.

We took a bus down the mountain, a ferry to Bali, the slowest minibus of all time to the beach at a laid-back town called Pemuteran on the northwest coast – the closest beach to Ijen. Kristi left me with the bags and went to check on the affordability of the nice looking hotel we were by. They had a pool that looked absolutely exquisite. She returned with sort of good news.

“It is rich white people heaven over there,” she declared. Not exactly our sort of place, ordinarily. But they had a room we were willing to splurge on.

At reception, they gave us a welcome drink and a cold towel – A COLD TOWEL! I guzzled the orange juice in about 3 seconds, my straw causing a violent sucking sound when it ran dry. I wiped off my face with the gloriously cold towel causing it to turn from blue to black. I looked at Kristi, she was covered in dirt, a far cry from the other couple at check in: the lady had on a huge sunhat, a summer dress and an absurdly oversized purse, the guy was wearing a white fedora. We were not the normal clientele.

We hadn’t eaten anything all day, we were dehydrated, in need of a shower and some sleep. After a cold shower in which I washed my hair twice and my face three times, an overpriced lunch by the sea and a dip in the pool, I was almost human again, and Kristi once again was a fair-skinned blonde, a different look from the mocha skin and rust colored hair she was sporting at check in.

“Let’s walk by reception again so they can see what we really look like,” she said.

So, in summary, what some people do for vacation, others do for work. And climbing up the Ijen crater was so hard on us we had to bust our budget to recover at a nice hotel, yet these super tough miners of Ijen do it for a job.

Next time I am not so happy at work, I will think about the Ijen miners, and I won’t complain. Okay, maybe a little. 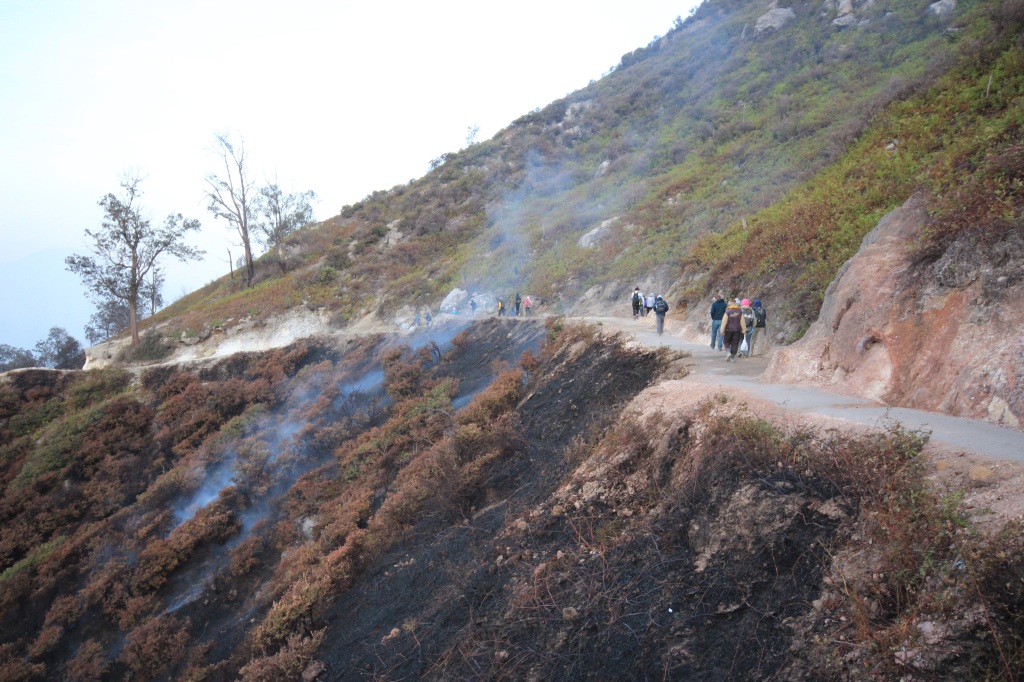 We hiked through gale force winds and a forest fire through the night, only adding to the surreal drama.

Toxic fumes pour from the burning sulfur. Turst me: you don’t want to breathe it.

Have you ever climbed an active volcano at night?

Questions, comments? Add to the conversation by leaving a note below.