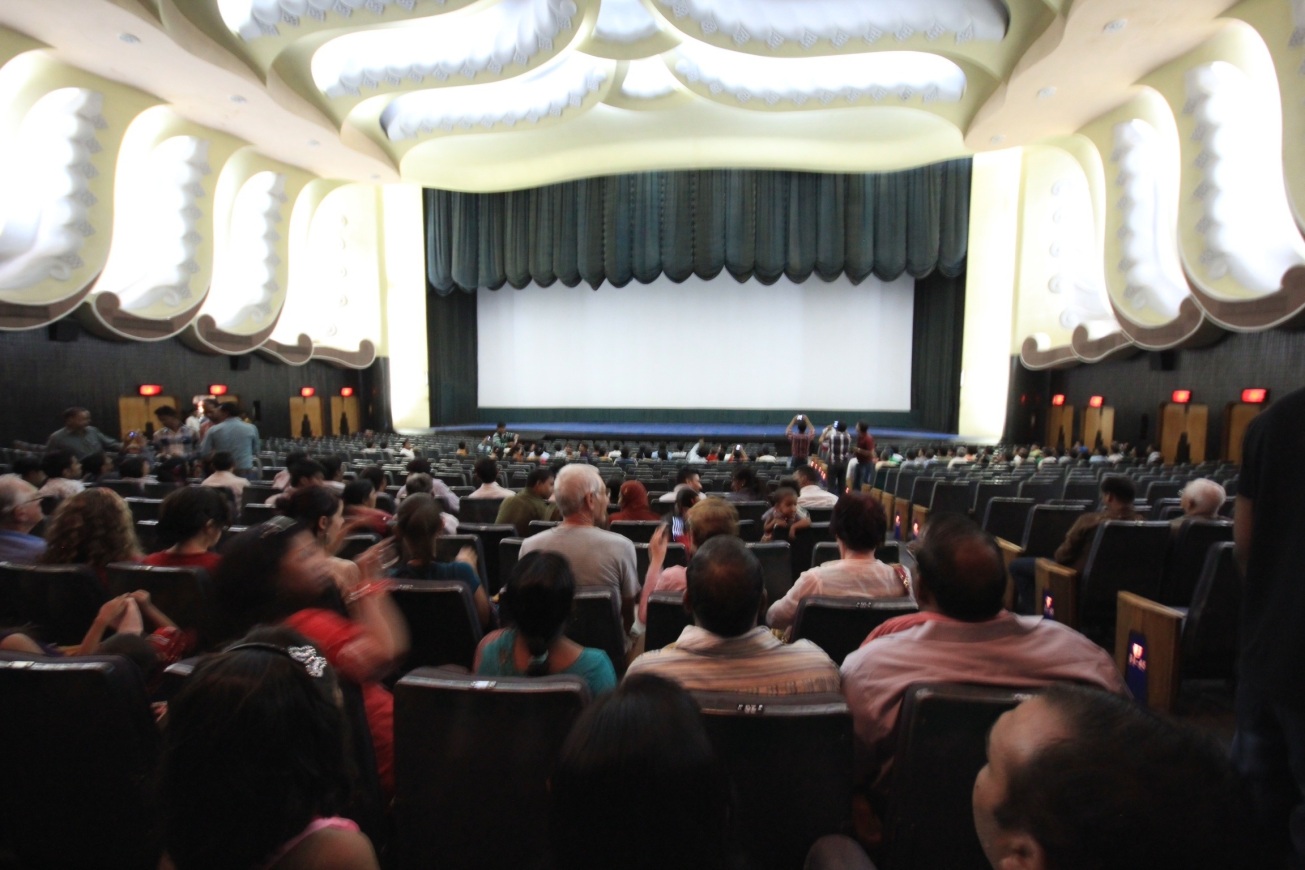 The moviegoers first gather in a large lobby where people get drinks, snacks and hang out. It is an exciting atmosphere as anticipation for the movie builds.

We went to the elegant Raj Mandir movie theater to see the Bollywood film English Vinglish. The movie was mostly in Hindi with some English and was about an Indian woman in New York learning English. It was interesting to us on many levels as she was a fish out of water in NYC taking in all the things she found bizarre, like public displays of affection, Hasidic Jews, strange New Yorkers with tattoos, modern fashion and the subway system. We’ve been doing the same in India so we could relate.

Differences in the Indian and American movie experience

1. Indians Cheer at the Movies

The first movie preview started out with a sexy young man riding across the Himalayas on a motorbike and the crowd erupted into cheers, with a chorus of boisterous “Whoos!” in surround sound. Then they showed the girl, a hot young Indian star, and once again the audience exploded into more cheers and clapping. It was hysterical to us. The two stars must be the Bollywood equivalent of Emma Stone and Ryan Gosling.

There was a cameo by Amitabh Bachchan, who according to Wikipedia, is a big deal in Bollywood cinema. At age 69, this dude is still super cool. I imagine him like a slightly older version of Clooney, or a more handsome Dustin Hoffman. When Amitabh was shown on the screen, the crowd erupted into the biggest cheer of the night.

The audience cheered and whooped at all the big punch lines and it was infectious, as we found ourselves clapping and shouting along with it.

2. Indians Use Cell Phones During the Movie

At one time, the guy next to me and the guy directly behind me were engaged in boisterous conversations on cell phones and the woman directly in front of me was trying to placate a crying baby. The guy behind me raised his conversation to a near scream as he was trying to overcome the music from the requisite musical montage. He was yelling into the phone, which had to be annoying to the person he was talking to.

Kristi was really bothered by it. “You are not going to change Indian culture right now,” I told her. But after the phones kept being answered, I became annoyed also and wanted to self-police by telling them to shut up. I gave my best un-approving glare, but it has no effect.

The entrance to the theater led into a huge lobby with gaudy casino-like decor. There were nice tables lining the walls and a few alcoves in which to hang out. A grand curved staircase led up to one of the two concession stand areas. The room was dark and weird (to me) Indian music played on the speaker.

Everyone assembled in the massive lobby area until about five minutes prior to the show. At that time the doors opened and everyone filtered into the theater taking pre-assigned seats. There was a vibe about the crowd that this was a big deal, as many of the Indians were taking photos of the movie theater and each other.

The theater itself was grand and beautiful and a curtain raised before the showing. There was even an intermission! After the movie, the doors on the opposite side of the lobby opened and everyone exited directly outside.

4. The prices were fair

It cost 80 rupees, or about $1.40 cents for the movie and the snacks and drinks were normal sized and normal prices. You didn’t have to get a 5-gallon bucket of coke or a $7 hot dog if you wanted anything. Wouldn’t that be nice if we had something like that in the states?