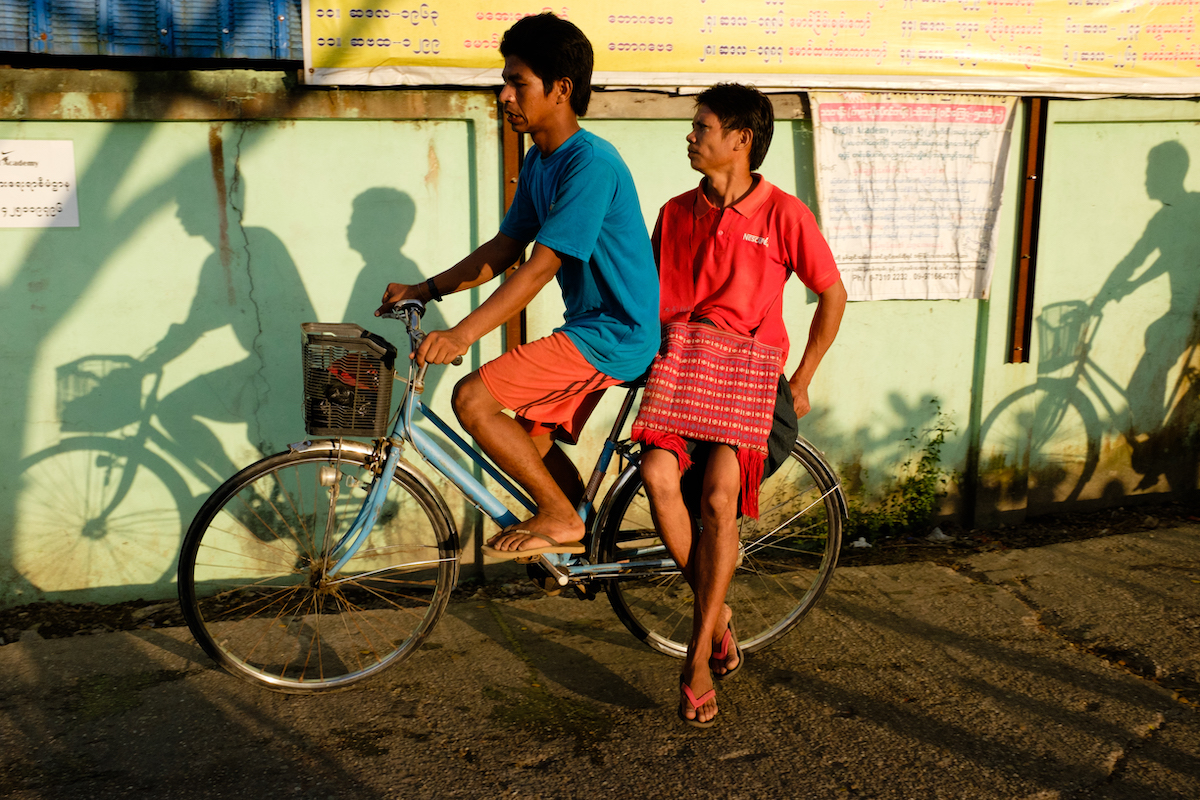 I recently attended a photography workshop by Maciej Dakowicz in Yangon, Myanmar, and I’m still mentally stimulated and physically tired. For seven days, we awoke before sunrise and shot photos 8 to 12 hours a day in some of the busiest and wildest places in the city. When we weren’t shooting, we were downloading and sorting photos and reviewing them with Maciej. During the week I learned a great deal about photography, took some of the best photos of my life, and had a blast. Let me tell you about the experience.

There were four other participants in the group and each day we departed the hotel between 6am and 7:30am and shot until mid-day. After a quick lunch, we would sort and edit photos and take a short break. In the afternoon, we’d head out and take photos until dark.

Eventually, when we were all exhausted, sweaty and mentally fried, someone would group text an emoji of a beer. In unison, we’d stop taking photos, go to a bar, and drink a cold beer while talking about our day and looking at each other’s photos. After a group dinner, we’d reconvene in the hotel lobby for a laptop party to review photos with Maciej.

We visited some really fascinating locations, like the chaotic and smelly San Pya Fish Market. I am not sure I would have went there my own since it was so crazy, and I had to throw away my shoes afterwards because they were saturated with fishy byproducts, but it was my favorite place we visited. In addition, we took photos at the chaotic riverside boat docks, went to the bustling train market in Danyigon, and shot in quieter places, like street markets, the train station, the Shwedagon pagoda, in city parks, and on random street corners. By the end of the week, we had thoroughly documented the city.

We rotated shooting partners each session and we all got to shoot with Maciej several times. Taking photos alongside a pro photographer is eye-opening. I got to see how he worked, what he shot, what he didn’t shoot, and how he interacted with people. He also challenged me to try different things, approach people, and pointed out situations I missed when shooting with him. 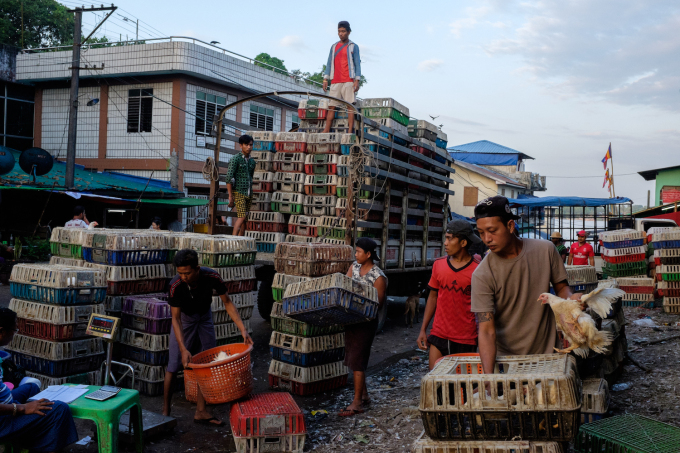 I may not have went to the smelly and chaotic San Pya Fish Market on my own, but it was the highlight of the week.

Maciej showing us how to creatively use reflections on a vehicle.

Getting photo reviews from a pro photographer is almost as good as shooting with one. I quickly learned to identify little problems that messed up my shots, like overlapping heads, big-ugly backs, and empty spaces. Unfortunately, I now see all the flaws with my old photos!

Maciej is from Poland and although he speaks English perfectly – even better than me, but to be fair, I am from Oklahoma – we liked the way he said the word “problem.” He’d look at our photos, wince, and say very politely but directly, “Um, this is a prohb-lum.” After a few photo reviews, I started to see the problems as well, and then in the field I started seeing the problems before clicking the shutter and moved around to avoid the problems in my photos. I think that is called “learning,” but I’m not sure.

Beyond seeing the problems, Maciej also saw things I missed and liked photos I wasn’t sure about.

As a result of the photo reviews, I discovered my personal style. During the first day or two, most of my photos were too bright and the color was washed out. Maciej encouraged me to expose for the highlights and to keep the dark areas dark. I started under exposing by 1/3 to 1 stop and this made the colors richer and increased contrast. I really like this look and plan to focus on bold colors with higher contrast going forward. 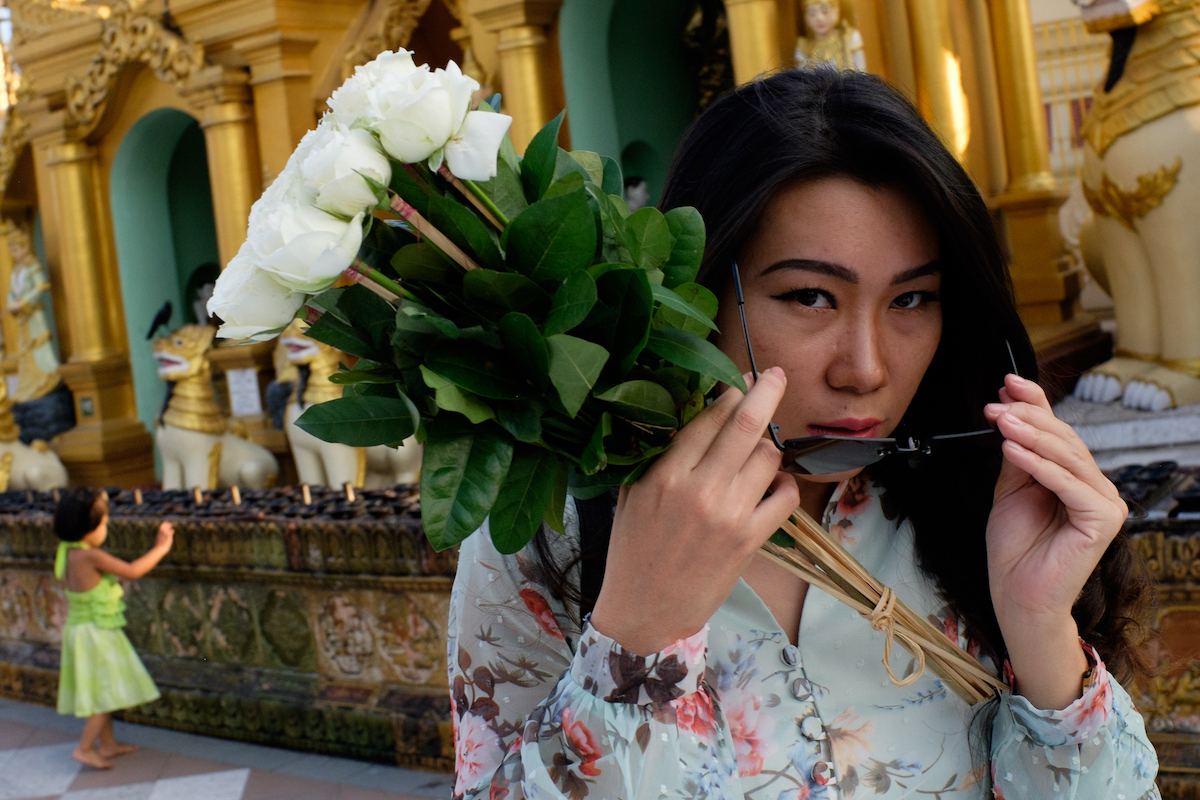 My first instinct was to crop out the girl and pigeon on the bottom left but Maciej liked her. “She is a little bonus,” he said.

I probably learned more about street photography in one week than I learned my whole life prior to the workshop. And although I could list out dozens of great tips here, I’m not giving them away for free! You need to go on a workshop with Maciej or at least buy me a beer to get this knowledge.

Having said that, here are three big takeaways from the workshop that will have a big impact on my photography going forward.

Taking candid photos of people can be awkward at times. A variety of things can happen when you aim the camera at a stranger – people laugh, their friends joke at them in a language you can’t understand, some people get shy, some get angry, and some people are totally indifferent. You never know what you are going to get. The awkwardness activates my flight or fight instinct and I often get a little embarrassed and leave too soon.

Maciej said over and over again that if you find a great scene and the people don’t mind you shooting, to “just stay.” Use different angles, take a variety of shots, wait for the light or action to change, but most importantly, just stay and keep shooting. By staying a few  extra minutes and getting the composition just right, I ended up with much better photos than by taking a few snaps and moving on.

This photogenic girl at the Thein Phyu Market was in perfect light. Even though her friends were clearly talking about me and there was much giggling and laughter, I stayed and kept shooting.

Be a Participant, Not an Observer

Maciej encouraged us to be participants and not observers. This made sense to me even though I’d never really thought of it this way. In the past, all my best photos have come when I’ve been in the middle of the action. As a result, when I’d see something interesting, I’d think to myself – how do I become a participant in this action? I started using my considerable charm to get closer and become a participant instead of standing back.

Maciej also challenged us to create vs. report. Photos that simply document a scene can be beautiful and interesting. There is nothing wrong with such photos. But, by using reflections, natural frames, juxtapositions, unique angles, and clever compositions, you can make creative, interesting and perhaps surreal photos. This isn’t something I typically do, but I’ve been trying to expand my thinking and look beyond the obvious shot.

An attempt to create vs. report.

Taking photos all day for a week with five other passionate and talented photographers was so much fun. Like I said earlier, we went to some hectic places, and having partners to shoot with helped me get out of my comfort zone and pushed me to be less shy. We had breakfast, lunch, dinner, coffee breaks, and evening beers together, talking about photography and travel pretty much the whole time.

On the last day of the workshop, Maciej reviewed all our good photos as a group and selected the top 10 from each participant. It was really interesting to see the photos of the others. We all expereinced the same places in the same light, but we all came away with very different photos that reflected our personalities and styles.

In summary, if you are passionate about photography, going on a workshop with Maciej is a must do. It is a far better investment than buying a new camera or lens. You will learn a ton, make new friends, and take many excellent photos. Just be mentally and physically prepared to shoot photos all day, and bring along an extra pair of disposable shoes in case you go to a fish market.

Have you ever done a photo workshop before? What did you learn?